PORTSMOUTH, Va. (WTVR) – Police are looking for a man they said robbed a customer of his new shoes outside a Portsmouth, Virginia shoe store.

Police said on Feb. 18, 2012, some customers lined up outside the Foot Locker on Victory Boulevard for a sale.

Store employees allowed two to three people in at a time to buy shoes.

As a 43-year-old man left the store after buying his shoes, another man waiting in line told the victim he was going to take the shoes, police said.

According to police, the suspect then grabbed the man and his bag with the shoes inside. The two men got into a fight, then the suspect drove off in a silver Chrysler 300.

Police described the suspect as a black man, 6’2” tall, 210 lbs, wearing a baseball cap, and a jacket with the letters BC on the left side.

Police released pictures of the suspect and the fight hoping to generate tips. Anyone with information on the incident or the identity of the suspect is asked to call the CRIME LINE at 1-888-LOCK-U-UP.  You may also text Portsmouth plus your tip to 274637 (CRIMES) or go to portsmouthpd.us, click on the CRIMELINE link and enter your tip. 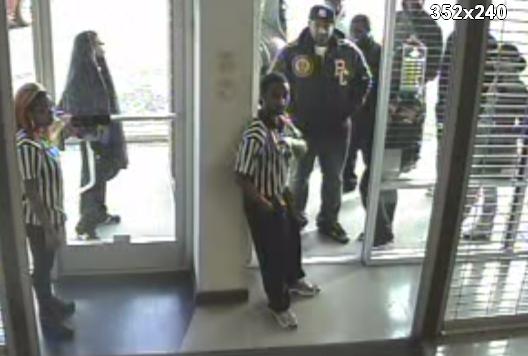