Pro-life advocates march at Capitol Square: ‘Everything weighs on Virginia'

Pro-life advocates march at Capitol Square: ‘Everything weighs on Virginia’ 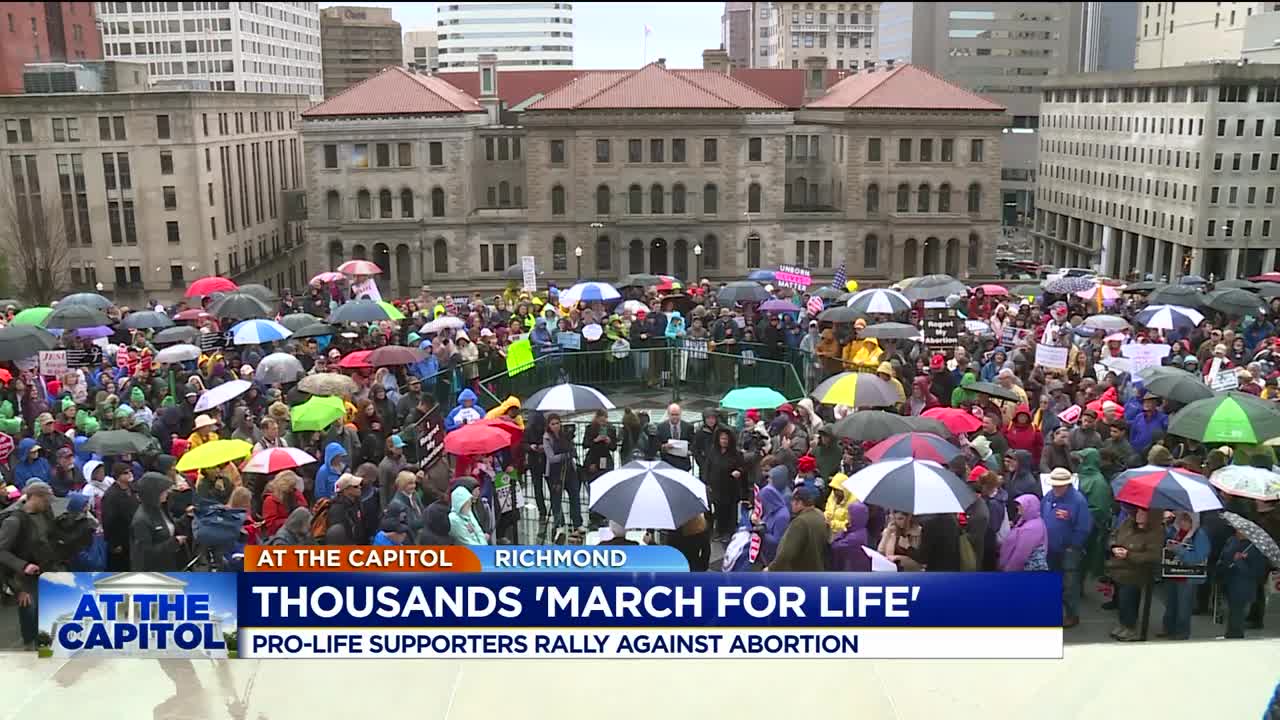 Hundreds of people braved the rain at Capitol Square for Virginia’s March for Life on Thursday. 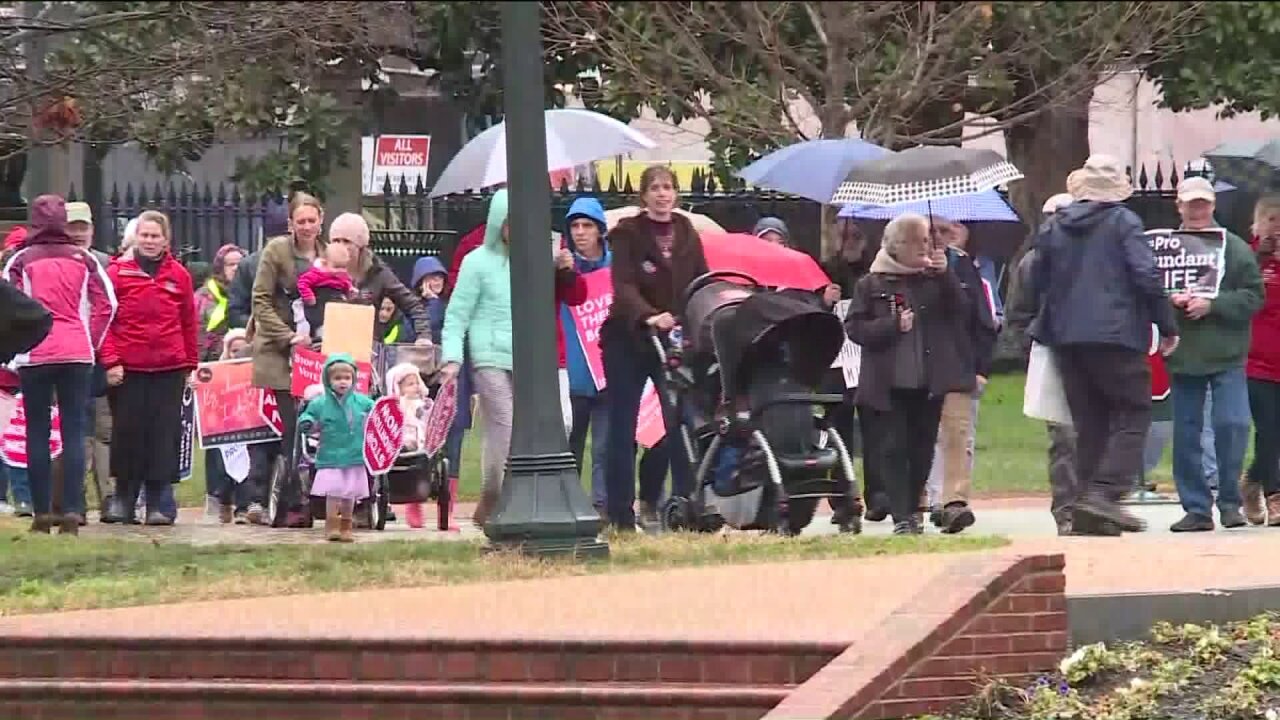 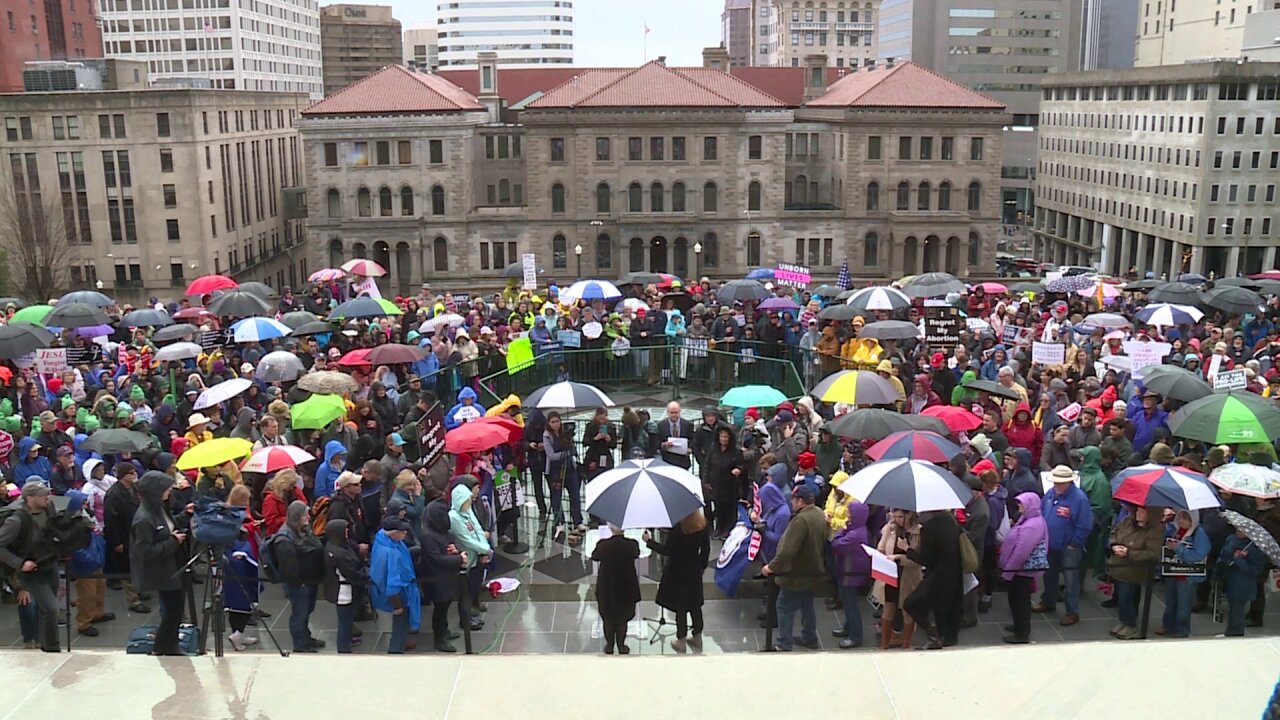 RICHMOND, Va., — Hundreds of people braved the rain at Capitol Square for Virginia’s March for Life on Thursday.

The second-annual event was organized by the Family Foundation, Virginia Catholic Conference, and the Virginia Society for Human Life.

“We are thrilled to see thousands from across Virginia coming despite the weather and standing even when it’s not convenient,” Family Foundation President Victoria Cobb said. “The unborn aren’t represented. They are the only people that can’t come to the General Assembly so we stand on their behalf.”

The march comes on the heels of the national March for Life event at Washington D.C.

Jeanne Mancini, president of March for Life, said in the last few years they’ve taken their efforts to the state capitals.

“We want to stand firm and to show the General Assembly we are a pro-life people and their legislation is out of touch with mainstream America,” Mancini explained.

RIGHT NOW: Virginia March of Life rally at the State Capitol. Thousands are expected to attend despite the rainy weather @CBS6 pic.twitter.com/ushrYo4hN0

Pro-choice groups are pushing to undo years of Republican-backed laws, including a 24-hour waiting period before an abortion, and requirements for ultrasound and counseling. Those groups argued that forcing a woman to wait once they’ve decided to have an abortion is cruel and not medically necessary.

Another Democrat-sponsored bill would eliminate regulations holding abortion clinics to the same standards as hospitals and expanding who can perform a first-trimester abortion.

“Right now in Virginia there’s a lot of obstacles to getting abortion care,” said Jamie Lockhart, executive director of Planned Parenthood Advocates of Virginia. “A woman has to go to the doctor, get an ultrasound, leave, and then come back 24 plus hours later.”

One bill would allow other medical professionals, besides a physician, to perform abortions.

“All of these restrictions are not medically necessary,” Lockhart argued. “They were put in place to get clinics to close — not support women.”

Abortion opponents said the laws protect pregnant women's health and safety and are prudent given the gravity of the decision to obtain an abortion.

The bills are advancing at a time when pro-choice advocates are increasingly worried the nation's highest court could overturn or chip away at the 1973 Roe v. Wade decision that established a nationwide right to abortion.

Mancini called Virginia the “ground zero for these issues.” She said, “everything weighs on Virginia.”

“Over the long run [we need to] take back over the General Assembly — an assembly that will promote the inherit dignity of the human person,” Mancini said.

One woman at the podium passionately spoke about her regret of receiving an abortion about 25 years ago.

“When I chose to have an abortion at 20 weeks I had never seen what was going on inside my body because it wasn’t mandated for my body,” she explained. “It is traumatizing and when God healed me I said I would be a voice for life.”

The U.S. Supreme Court is scheduled in March to hear its first major abortion case since the addition of two justices appointed by President Donald Trump.