Richmond School Board to weigh reopening options for Fall 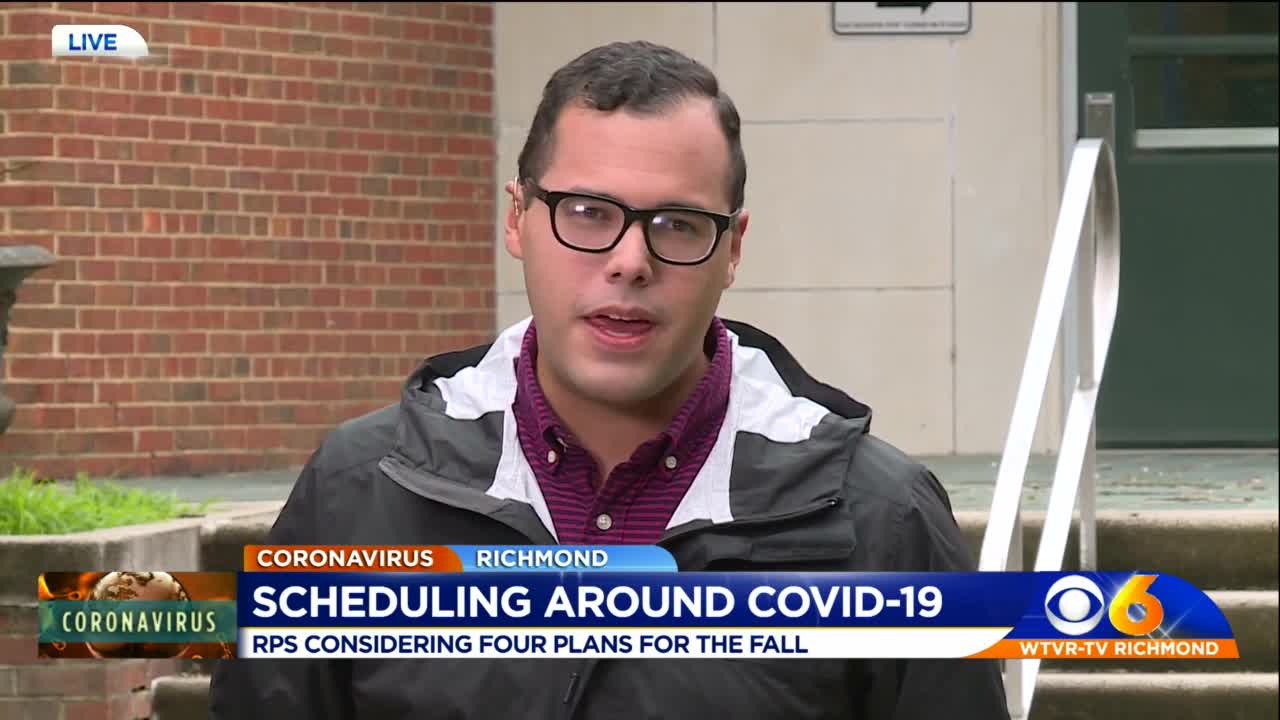 The Richmond School Board discusses how to resume classes when school resumes in September.

RICHMOND, Va. — Richmond Public School Superintendent Jason Kamras presented four scheduling options if in-person classes were to resume in September. The options are based on Governor Ralph Northam’s reopening guidance when Richmond is expected to be in Phase Three in the Fall.

All four options would split the student populations of each school in half. The plans differ by which days of the week the groups would attend class in-person, according to a presentation available on the Richmond School Board’s website.

An online survey based on early data showed parents were more likely to support “Schedule 2.” Half of a school’s students would attend class on Mondays and Tuesdays and the other half on Wednesday and Thursday with virtual learning on Fridays. The classrooms would be cleaned on Tuesday evening.

The survey showed parents were least likely to support “Schedule 3,” which included some students attending class on Saturdays.

The scenarios were expected to be discussed during a virtual School Board meeting Monday evening.

Greg Muzik, the principal at Mary Munford Elementary School in the Museum District, sits on a committee of principals tasked with safely reopening his school in the Fall.

“Ideally, we'd open up with everybody coming back to school for the first day of school,” he said. “Staff have concerns, parents have concerns, everybody, including all my teachers really want to get kids back in school.”

Muzik spoke to CBS 6 in May after he and his wife tested positive for COVID-19. He believed he may have contracted the virus at a laptop distribution event at his school.

The longtime Munford principal said he hears from parents and their concerns about reopening nearly every day.

“For parents, a lot of the options are partial opening. That doesn't really alleviate the issue of what do you do with your kids if you have to go to work,” Muzik explained.

He hasn’t yet supported one scheduling option over another, but shared his concerns about social distancing guidelines and requirements.

“At a school like mine, I don't know that I could put 12 to 14 kids in a classroom and having the six feet apart,” Muzik said. “Space-wise in the classroom, if you really wanted to keep kids six-feet apart then that takes a lot of room.”

Under Phase Three, physical distance should be created between children on school buses when possible by limiting the capacity to optimize the distance between students.

“When you look at what they recommend for transportation with one child in the seat and every other seat that does not fit very many kids on a school bus,” Muzik said.

On Facebook, one parent asked, “Is the assumption that the number of buses triple?”

Another parent commented, “What time would buses be picking students up if they have to double back?”

Muzik acknowledged that these options are preliminary and could change depending on the severity of the coronavirus in September.

“I’m hopeful that we really will have some face-to-face [instruction]. There's a really high level of motivation from the teachers that I work with about getting the kids back in school,” he said.

Click here to see the presentation on the reopening of Richmond schools.