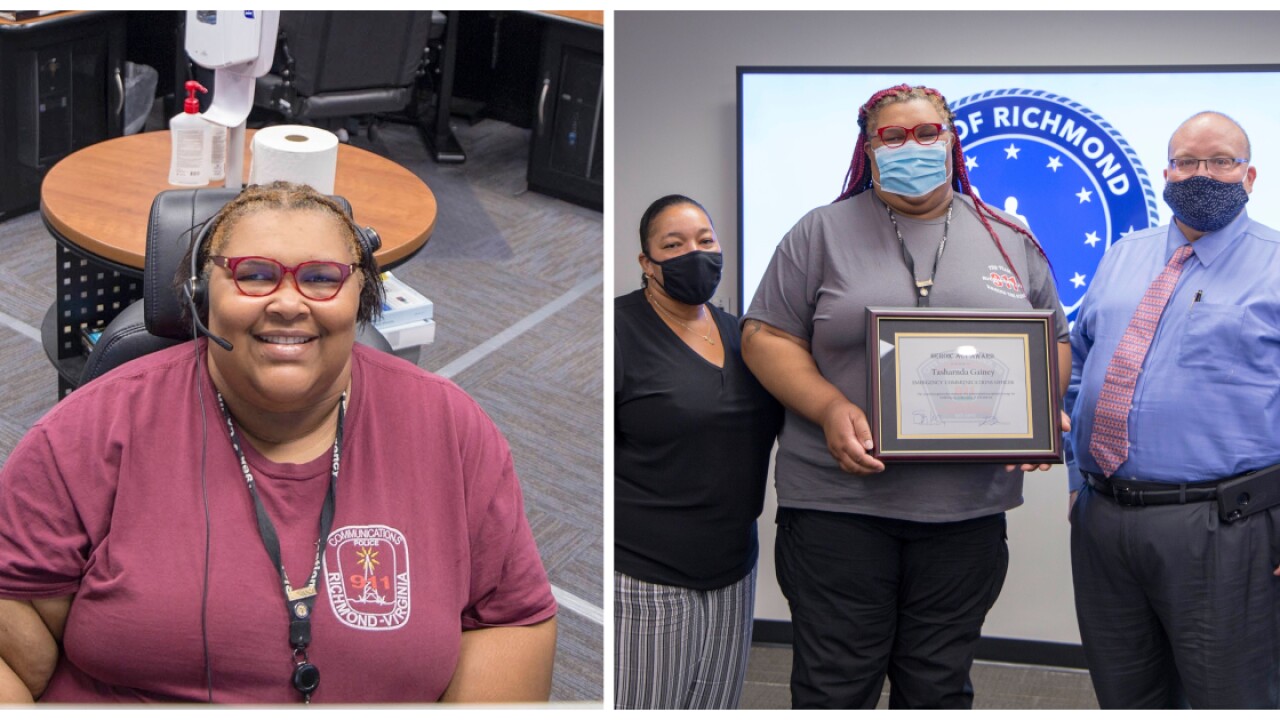 RICHMOND, Virginia – A Richmond Department of Emergency Communications has been awarded a Heroism Award for her attempt to save a stranger's life after he was hit by a car.

On July 24, Tasharnda Gainey stopped to help a pedestrian struck by a car on Jefferson Davis Highway in Chesterfield.

“I have a medical background. If I see somebody in need, I have to stop,” said Gainey, an emergency communications officer with the Richmond Department of Emergency Communications since 2008.

Gainey was picking up her 2-year-old twins from the babysitter when her 17-year-old daughter said she wanted Popeyes. Even though other Popeyes locations are closer, Gainey headed toward Chester.

“I cut around, and it was an extremely long way. I just could not think how to get there,” said Gainey, a resident of North Chesterfield for 22 years. “I drove all around and told the kids, ‘I guess we’re taking a ride today’.”

After passing Willis Road on Jefferson Davis Highway, she saw a truck pulled sideways and a sedan.

“I could see someone lying in the road,” she said. “I could kind of see him from the side, and I yelled to my daughter, ‘turn your head; don’t look.’”

Gainey said she was surprised that no one was helping the victim, even though others were nearby.

“My God, there’s nobody here,” she thought. “I heard no sirens, nothing. That freaked me out more than his condition.”

She called 911 in Chesterfield and reported a pedestrian struck in the southbound lane of the 9400 block of Jefferson Davis Highway. His chest was not moving, and she checked for a pulse. As the 911 call-taker prepared to give her instructions on how to start chest compressions, Gainey told her she already was doing them.

A former emergency medical technician with the Bensley Bermuda Rescue Squad in Chesterfield and trained in CPR as a dispatcher, Gainey continued the compressions, keeping time to the beat of “Staying Alive,” she said, and counting aloud to the 911 call-taker.

Later, another bystander offered to help, but she continued until Fire and EMS personnel arrived and took over.

Unfortunately, the victim did not survive.

Back in the car, her daughter had called Gainey’s mother, telling her, “Mommy’s doing CPR by the side of the road.” Surprised, her mother asked her, “So you stopped again?”

In 2002, Gainey had stopped to help at the scene of crash near the intersection of interstates 295 and 64 in Henrico County. She ended up being summoned to testify as a state witness in a court case in which a person was convicted of vehicular manslaughter.

“I stopped this time because I didn’t see anybody helping him,” she said. “Somebody needed help. That drew me in. I couldn’t just drive by. I wouldn’t be OK with it.”