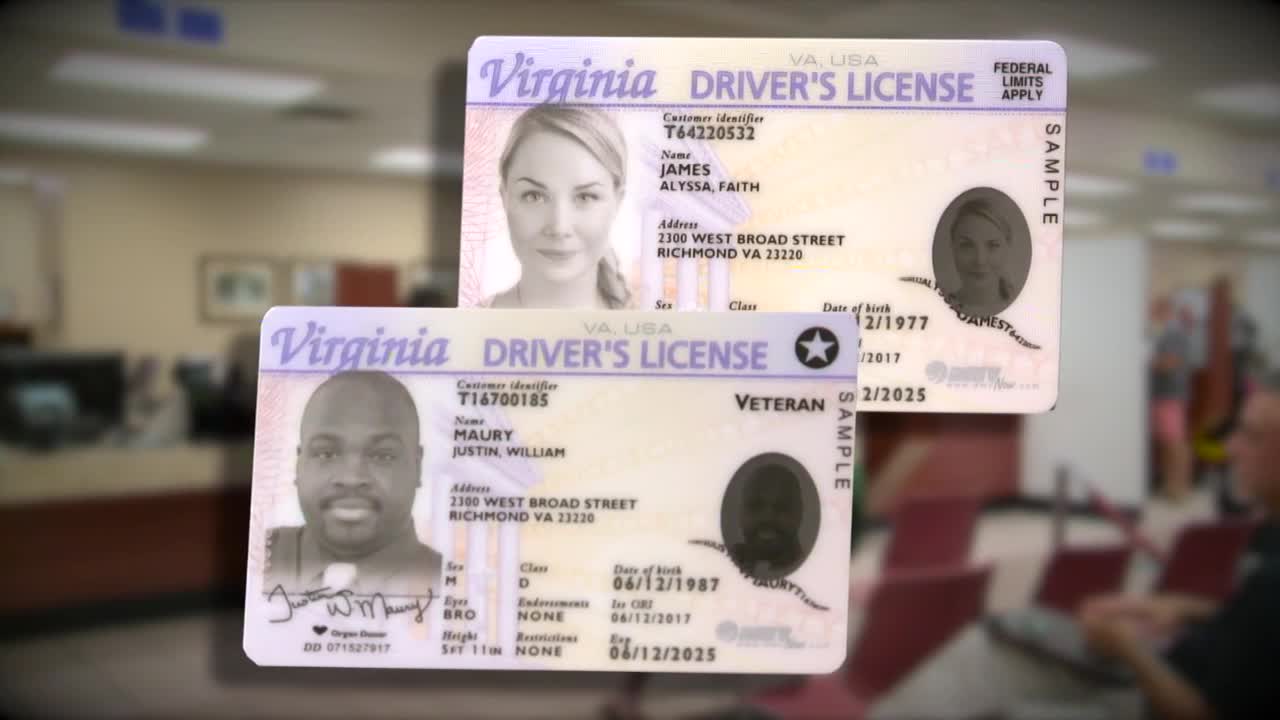 “We’ve served about 1.1 million Virginians so far, so we have about 1.5 million more to serve,” DMV Communications Project Manager Bandy Brubaker said.

RICHMOND, Va. -- Virginia Department of Motor Vehicles (DMV) officials said 1.5 million Virginians are eligible to get their Real ID, the federally required form of identification needed to fly domestically or enter a secure federal facility, ahead of the Oct. 1 deadline.

“We’ve served about 1.1 million Virginians so far, so we have about 1.5 million more to serve,” DMV Communications Project Manager Bandy Brubaker said.

While the IDs are optional for Virginians, they (or another federally-approved form of ID, like a passport) will be required to fly or enter federal buildings as well as military bases.

Tori Barnes with the U.S. Travel Association told CBS News more than half of Americans do not know about the October deadline.

"The potential is catastrophic," Barnes said. "We're absolutely not Real ID ready at all. We know 99 million Americans don't have a Real ID… It's going to be Thanksgiving 2020 where Grandma goes to get on a plane and she can't go see her grandkids."

Official: 'Come in sooner rather than later'

Meredith Gunter said she recently went on a trip with her parents, who urged her to get the Real ID.

“I do not have my Real ID yet, but my dad has his," she said. "They thought it would be really hard to get through the airport without the Real ID, because I didn’t have my passport, I just had a birth certificate."

That is one of the several items, which include an unexpired U.S. passport, Social Security card or W-2 form displaying full number, Valid Virginia driver’s license, recent utility bills, mortgage statement or rental lease agreements displaying current residential street address, required to get a Real ID. Click here for a complete list of what you need to bring.

"I travel by plane maybe once a year, and seeing the signs, I was like, 'Maybe, my parents are right.'” Gunter said.

However, Gunter believes many Virginians are holding off because they do not want to stand in line at the DMV.

“It's human nature to wait until the last minute," Brubaker said. "That's why we’ve been encouraging people to come in sooner rather than later."

The mobile centers travel the state four days a week in hopes of making it easier for residents to get their Real IDs.

Those DMV Mobile Offices are expected to be in Central Virginia on Monday and Thursday.

Did you have to wait at the DMV? Click here to weigh in on the WTVR CBS 6 Facebook page.

What is the Real ID?

The REAL ID Act, which was passed by Congress and signed into law by President George W. Bush in 2005, set "minimum security standards" for licenses that are accepted by federal agencies.

The law means that you cannot use an older, non-approved state license to board federally regulated commercial aircraft. However, you can still other forms of accepted identification -- like a passport -- in place of your license.

"The final enforcement deadline is Oct. 1, 2020," DHS officials wrote. "By this date, not only must all states be issuing Real ID-compliant licenses or IDs, but individuals must also have visited their state’s driver’s licensing agency and obtained a Real ID compliant card, or acceptable alternative such as a U.S. passport, if they wish to fly on commercial aircrafts or access federal facilities."

Officials noted that minors do not need the IDs since the TSA does not require children under 18 to have identification when traveling with a companion.

The Real ID will also be required to access federal facilities, like military bases and nuclear power plants.

The Department of Homeland Security unveiled a "phased enforcement plan" for the Real ID Act in December 2013.