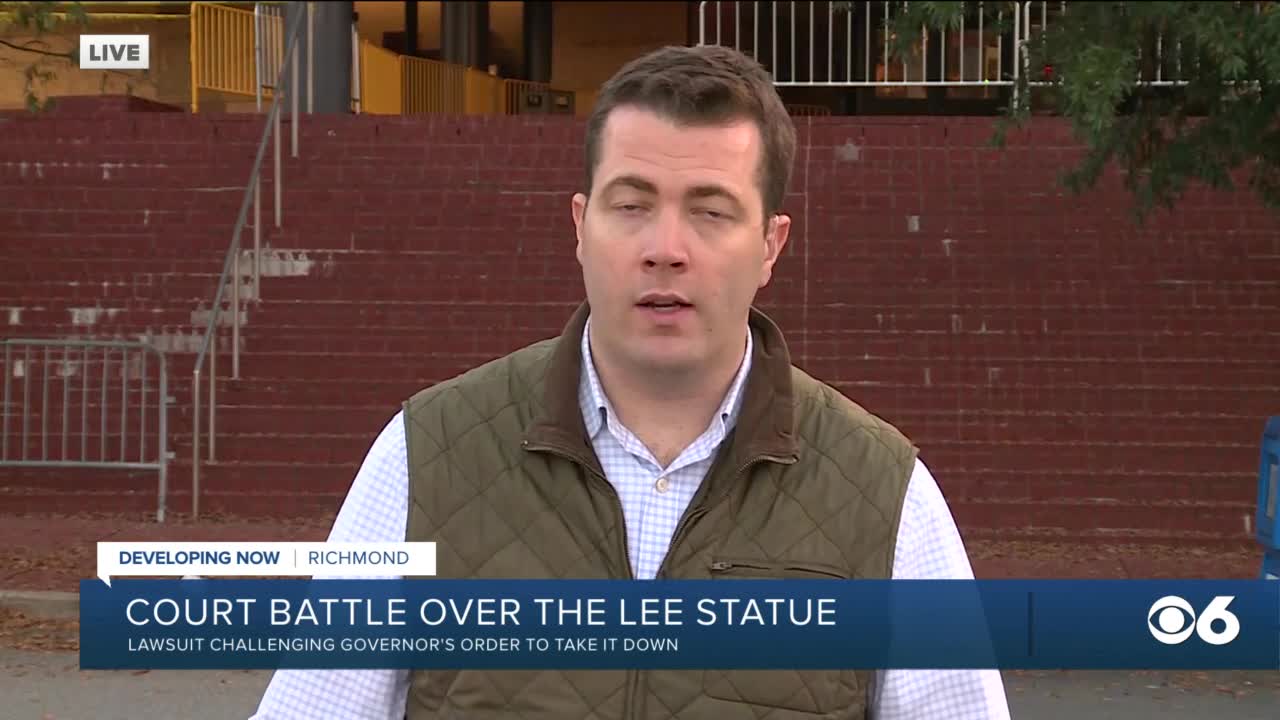 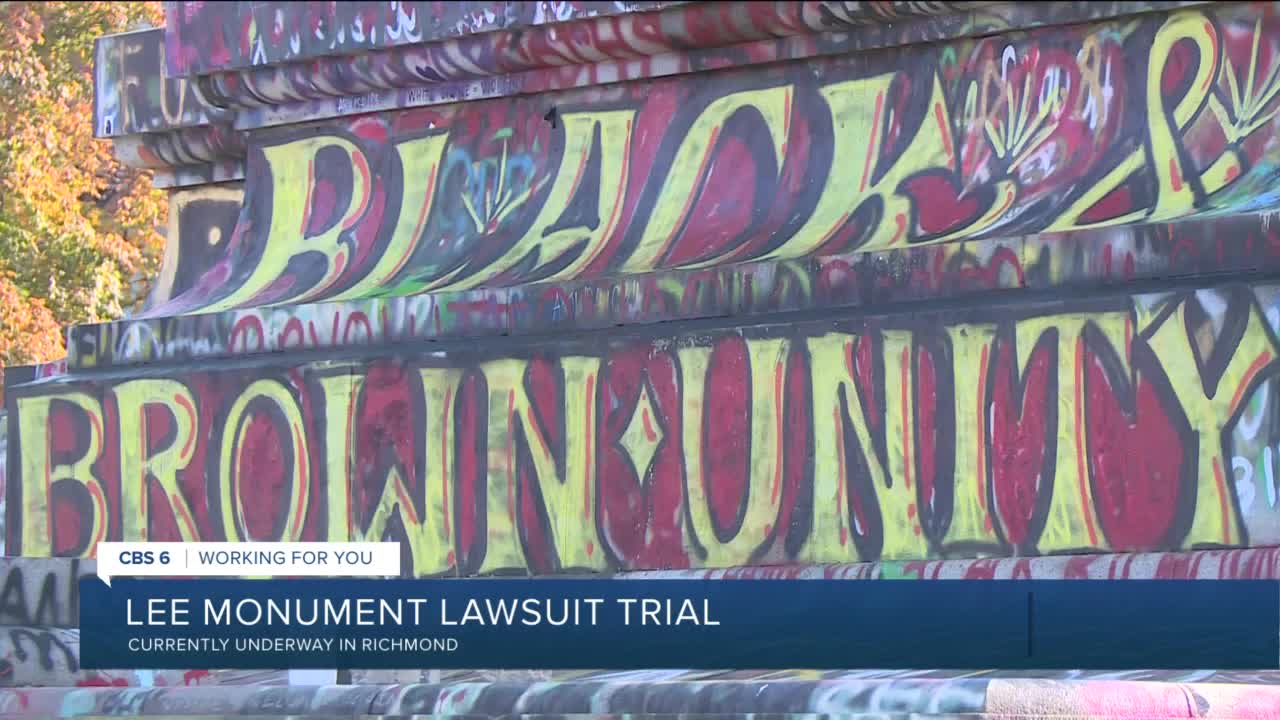 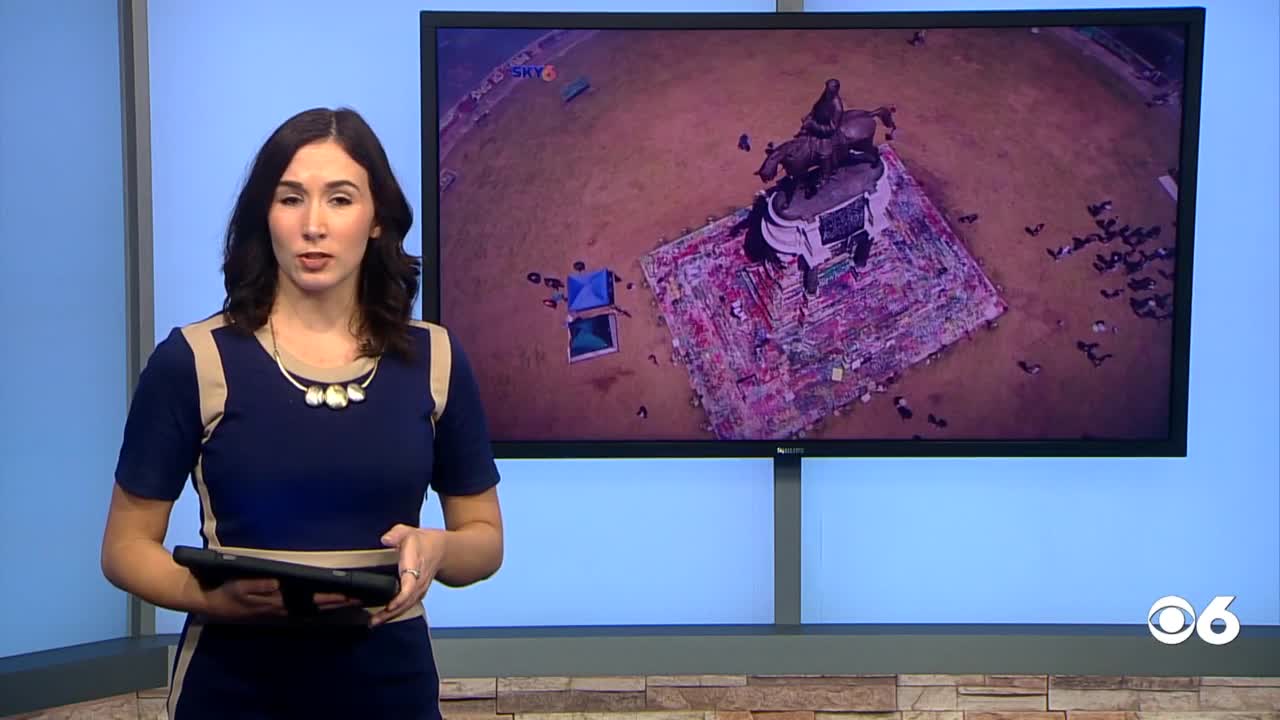 RICHMOND, Va. -- A judge heard hours of arguments and witness testimony Monday but did not immediately issue a ruling in a lawsuit seeking to prevent Virginia's governor from removing an enormous statue of Confederate Gen. Robert E. Lee in Richmond.

The plaintiffs, a group of Richmond residents who live near the monument, filed suit after Democratic Gov. Ralph Northam ordered the removal of the statue in June amid the outcry and unrest caused by the death of George Floyd in police custody.

The plaintiffs argue that Northam does not have the authority to remove the statue erected in 1890 in the former capital of the Confederacy. They say doing so would violate the state constitution, an 1889 act of the General Assembly and restrictive covenants in deeds that transferred the statue, its soaring pedestal and the land they sit on to the state.

“That the Governor now disagrees with the original message, or discerns a different message in the Lee Monument, does not give him authority to override the contractual obligations of the Commonwealth,” attorneys for the plaintiffs wrote in a court filing.

The state has argued it cannot be forced to forever maintain a statue it says no longer comports with its values.

“No individual Virginian — whether living Monument Avenue residents or long-dead land grantors — may force the Commonwealth of 2020 to preserve the Lee statue in its present location in perpetuity,” Attorney General Mark Herring wrote in a court filing.

In court, Solicitor General Toby Heytens asked the judge to strike all the remaining counts in the plaintiffs’ lawsuit and dissolve an existing injunction preventing the removal of the statue.

Richmond Circuit Court Judge W. Reilly Marchant said he would take the arguments under advisement and rule later, likely within seven to 10 days, saying there was “plenty to consider.”

Marchant heard hours of wide-ranging witness testimony, including from nationally recognized historian Edward Ayers, a former president of the University of Richmond, who was called by the state. Ayers discussed the central role of slavery in the Civil War and the development of Monument Avenue.

No matter Marchant’s eventual decision, it's possible the case could take even more time to unwind. The case is widely expected to be appealed to the Supreme Court of Virginia, and an injunction could remain in place while that plays out.

Monument Avenue, a prestigious residential boulevard that once contained one of the nation’s most prominent collections of Confederate statues, was dramatically transformed over the summer. The avenue’s other large Confederate statues, which all sat on city property, were either toppled by protesters (in the case of Jefferson Davis ) or hauled off by contractors working for the city. Amid weeks of nightly protests, Mayor Levar Stoney ordered the statues removed, invoking his authority under a local emergency order.

The Lee statue, meanwhile, was transformed into a bustling hub of activity for demonstrators protesting police brutality and racism. The giant concrete pedestal of the statue is covered by colorful and constantly changing graffiti, many of the messages profanely denouncing police and others demanding an end to systemic racism and inequality.

A recent piece in The New York Times Style Magazine included the statue in its current state among a list of 25 of the “most influential works of American protest art since World War II.”

The 21-foot-high (6.4-meter-high) equestrian statue, which the state has said weighs about 12 tons (11 metric tons), sits atop a pedestal nearly twice that tall. Northam’s spokeswoman said Friday that a decision has not yet been made about what will be done with the pedestal.