On crossover day, the final day that each chamber of Virginia’s General Assembly can take action on their own bills, dozens of hot button issues were advanced by both chambers, now controlled by Virginia Democrats. 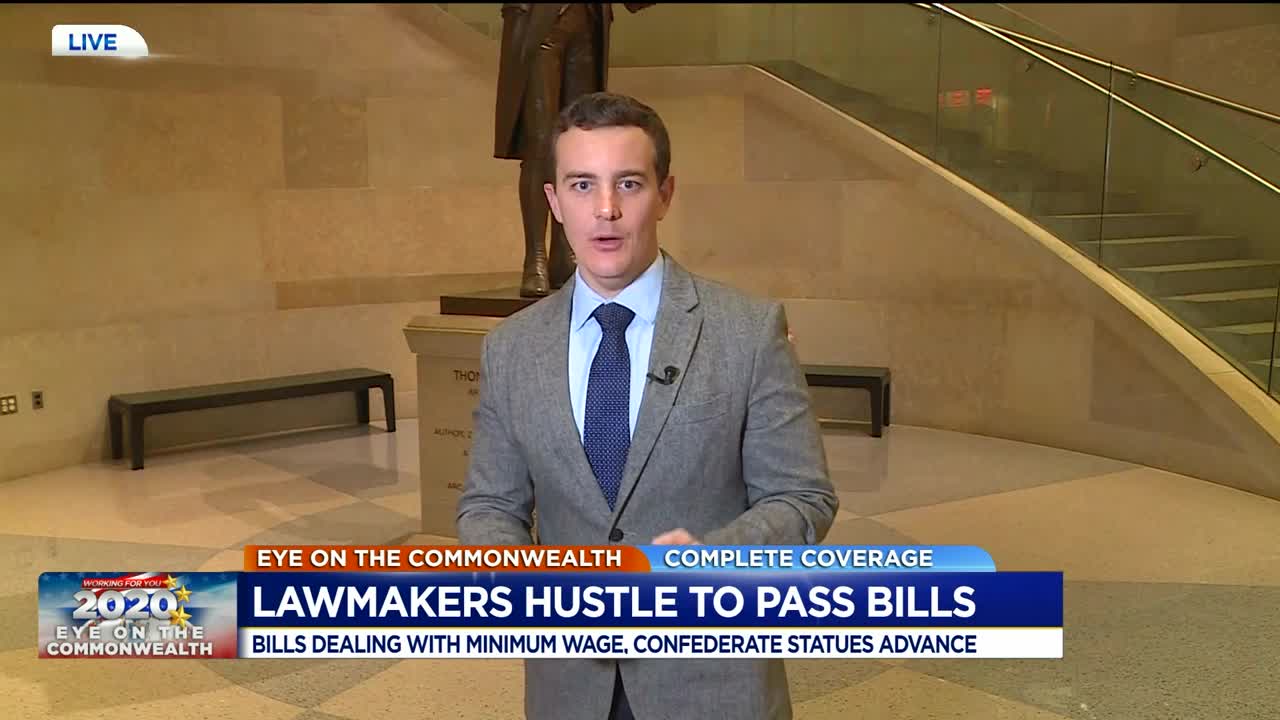 RICHMOND, Va. -- On crossover day, the final day that each chamber of Virginia’s General Assembly can take action on their own bills, dozens of hot button issues were advanced by both chambers, now controlled by Virginia Democrats. Republicans warned of economic and social issues the changes would lead to if the bills became law.

Following crossover day, both the House of Delegates and Senate can only vote on bills the other chamber has already passed, excluding the budget. The yearly deadline meant a flurry of votes on a plastic bag tax, assault weapon and high capacity magazine ban, minimum wage increase, photo ID voting requirements, and even legalizing casino gaming.

Both the House and Senate passed bill that would allow undocumented people living in Virginia to obtain a state drivers license. Supporters said the bills will lead to increased road safety by requiring more people to pass driving tests. Opponents said the state should not reward illegal immigration by granting state drivers licenses.

Fortunata Nicholas, who is undocumented, traveled to the State Capitol from Richmond County to support the bill. She said in her rural county, she must drive to make money to support her family.

“The houses are very long distance, 10-15 minutes away from each other. So that’s our main reason, we don’t have transportation,” Nicholas said. “What I hear is, the government of Virginia protect all the immigrants.”

The House of Delegates passed a bill that would ban the sale of assault-style weapons and high capacity magazines in Virginia. Under the bill, people who currently own one would be allowed to keep it. The original version would have required registration with Virginia State Police, however that provision was stripped from the bill that passed the House.

The vote played out mostly along party lines. Delegate Dan Helmer (D-Fairfax) said the measure would protect Virginians from gun violence and limit mass shootings. Republican Nick Rush (R-Floyd) said the bill was a blatant violation of the second amendment.

“This is part of a group that will not comply with unconstitutional laws,” said Fred Deady, who travelled from Fredericksburg for the vote.

“These firearms you could lay them on a table on the floor, they’re not going to hurt anybody. It’s the people who pick them up with bad intentions,” Deady said. “The bill of rights gives us inalienable rights that cannot be taken away.”

PENALTY FOR NOT REPORTING LOST OR STOLEN FIREARMS (SB 67)

Although a flurry of bills passed both chambers, several were voted down or passed by for the year, included a bill sponsored by Sen. Jennifer McClellan (D-Richmond) that would require gun owners to report lost or stolen firearms to police within 24 hours. The gunowner would face a civil penalty of $250 for a violation and grant immunity with gunners who comply.

McClellan’s bill was voted down 19-21, with two Democrats joining Republicans to defeat it. A similar bill already passed the House.

Both the House and Senate passed similar bills that would allow localities to remove war memorials if they chose to do so. Current law bars removal of war monuments, including those honoring Confederate leaders. That state policy has been a sticking point for cities in Virginia who want to take down Confederate statues, such as the movement in Richmond to change the composition of Monument Avenue.

Republicans said the state was choosing a “selective history” to tell the story of the Commonwealth, but Democrats said Virginia’s true history was suppressed for centuries by racially motivated policies and decisions. Governor Ralph Northam (D) supports the bills.

The General Assembly seems poised to gradually increase the minimum wage in Virginia to $15 per hour , but both chambers are approaching the issue differently through legislation. Both chambers have heavily amended the original bills that are expected to gain majority approval, which signals the issue will end up in conference committee.

Under the version that passed the House Tuesday, Virginia’s minimum wage would increase to $10 per hour by July, and eventually reach $15 per hour by 2025.

The Senate version is much different in when and how the increase takes place. Amendments by Sen. Scott Surrovell (D-Fairfax) call for an increase to $9.50 by 2021 and then $1 per year after that until Virginia reaches $15 per hour.

Surrovell’s amendments include a provision that would index the minimum wage by region, meaning it would be higher, for example, in Northern Virginia than Southwest Virginia, where the cost of living is much different.

As of this writing, the Senate had yet to take a final vote on SB 7.

During floor debate, Democrats said no reasonable person thinks someone can support their family on $7.25 per hour, which is the current level. Republicans said such a drastic increase would cost low wage and entry level workers their jobs.

“Being able to make at or near a living wage will be an infrastructure change to unite us all,” said Del. Dawn Adams (D-Richmond).

“I will refer to the bill as the unemployment expansion act,” said Del. Joseph McNamara (R-Roanoke). “I will suggest to you it’s simple economics. Any existing business models do not have the capacity to absorb the change. Jobs will go away.”

“We’re here for 60 days, and someone works 52 weeks a year and only makes $3,000 more than we do as state delegates,” said Del. Luke Torian (D-Prince William) while citing the fact state legislators make around $12,000 for their service.

Virginia will likely soon pass laws regulating casino gambling, allowing the development of casinos in five cities. Those cities are Richmond, Portsmouth, Norfolk, Danville, and Bristol. Those cities would have to pass a voter referendum asking if their residents approve of a casino development before starting the project.

Democrats and Republicans had worked out a compromise to advance bills and members of both parities have voiced support. Supporters said casinos will provide an economic boon for areas that historically struggle to find revenue generators. Opponents worried it would open a box to all kinds of gambling enterprises, harm people who struggle with gambling addiction, and only serve as an economic “sugar high,” as Del. Schuyler VanValkenburg put it.

As of this writing, the Senate had not taken final action on their version of the bill, and the House had passed theirs earlier in the day.

A bill that would have allowed localities to levy a 5 cent plastic bag tax, with some exemptions, was revived after being defeated earlier in the day in theHouse. Del. Betsy Carr’s (D-Richmond) bill was originally defeated by one vote, but later recalled by fellow lawmakers and passed by a one vote margin.

State legislatures who vote on the winning side of a bill can request it be called again so other lawmaker can change their votes.

Carr said the bill will help get rid of plastic waste, an issue relating to environmental stewardship Carr said “we all will deal with.” Del. Margaret Ransone (R-King George) said it would put an extra burden on families who have to scrape and claw to pay for the grocery bill already.