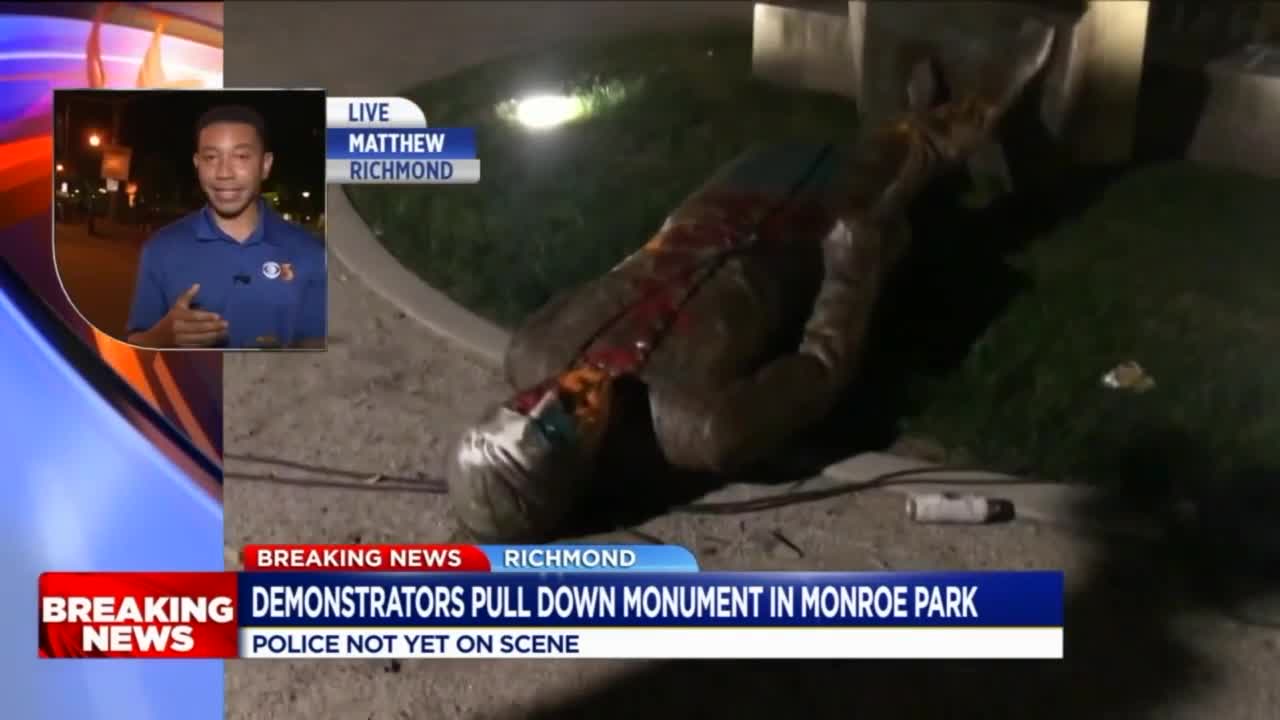 A Confederate statue in Richmond's Monroe Park was toppled by demonstrators just before 11 p.m. Saturday night. 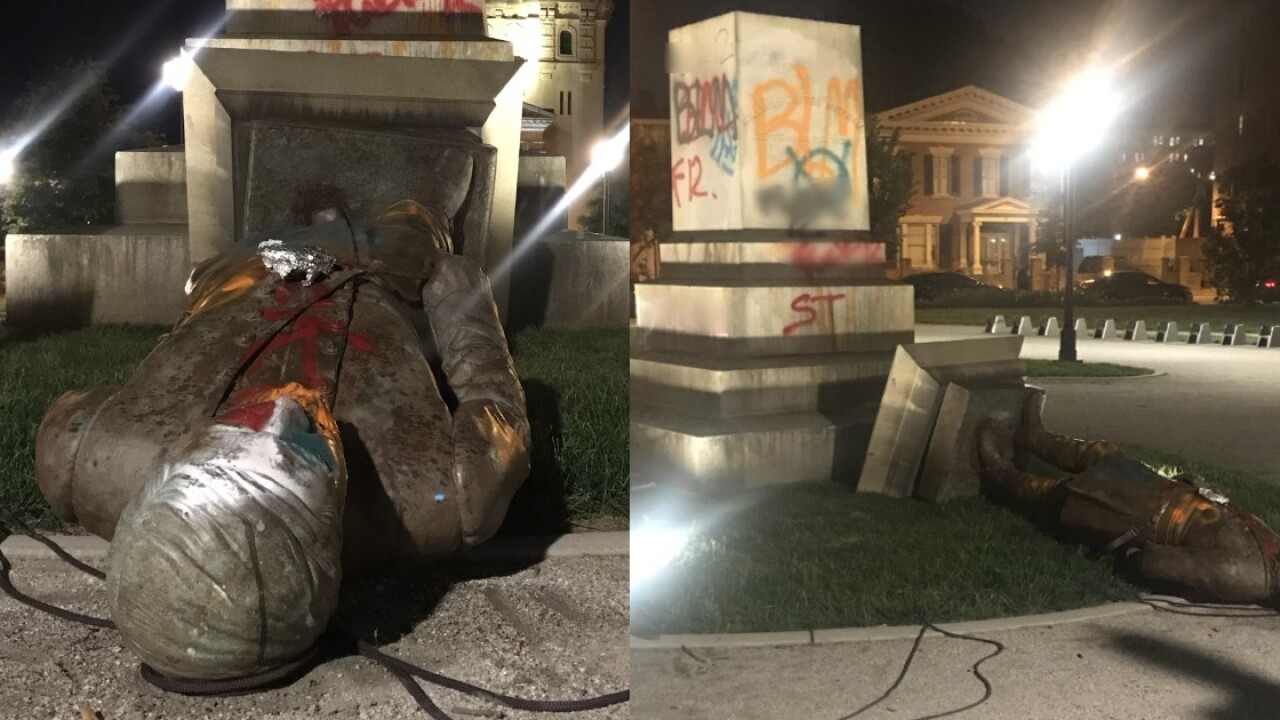 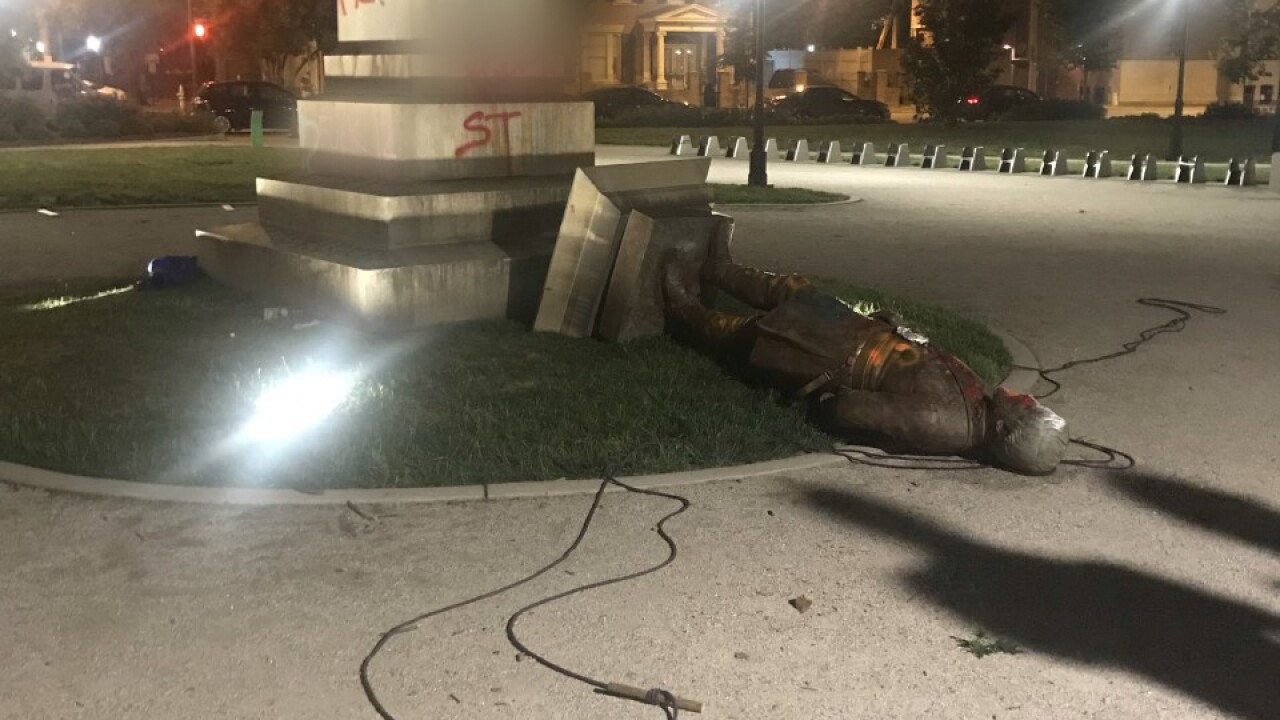 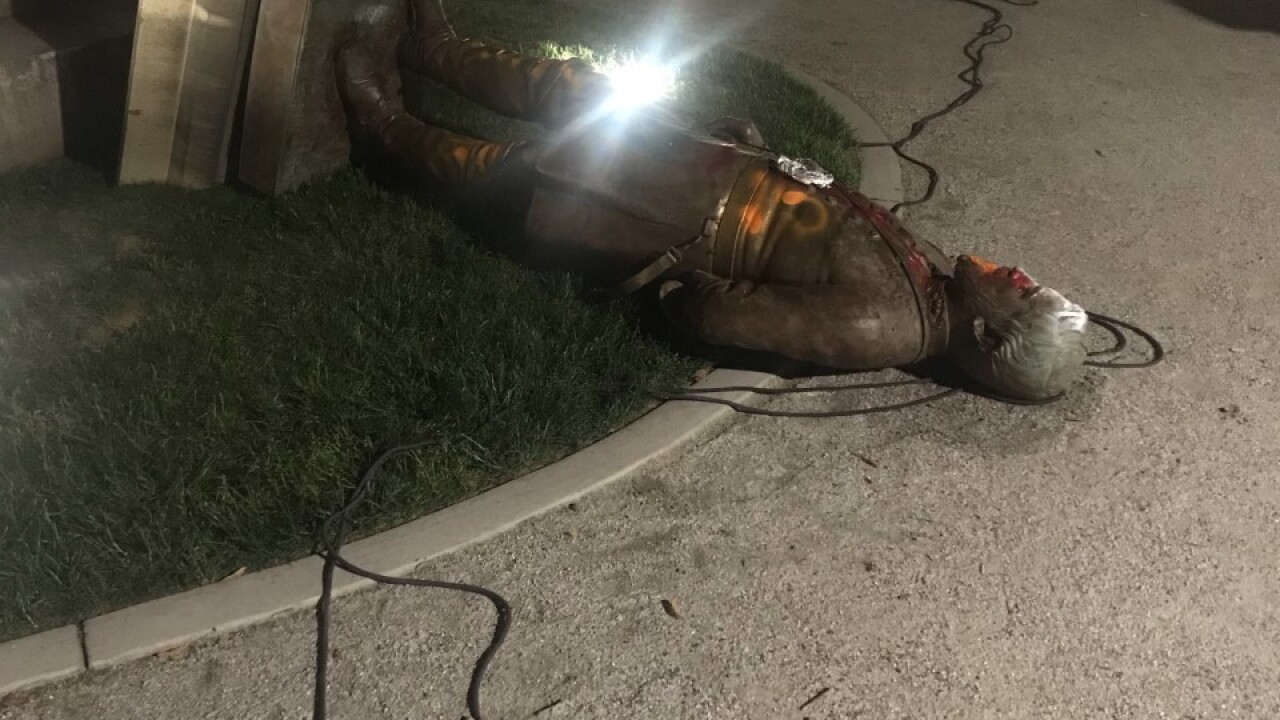 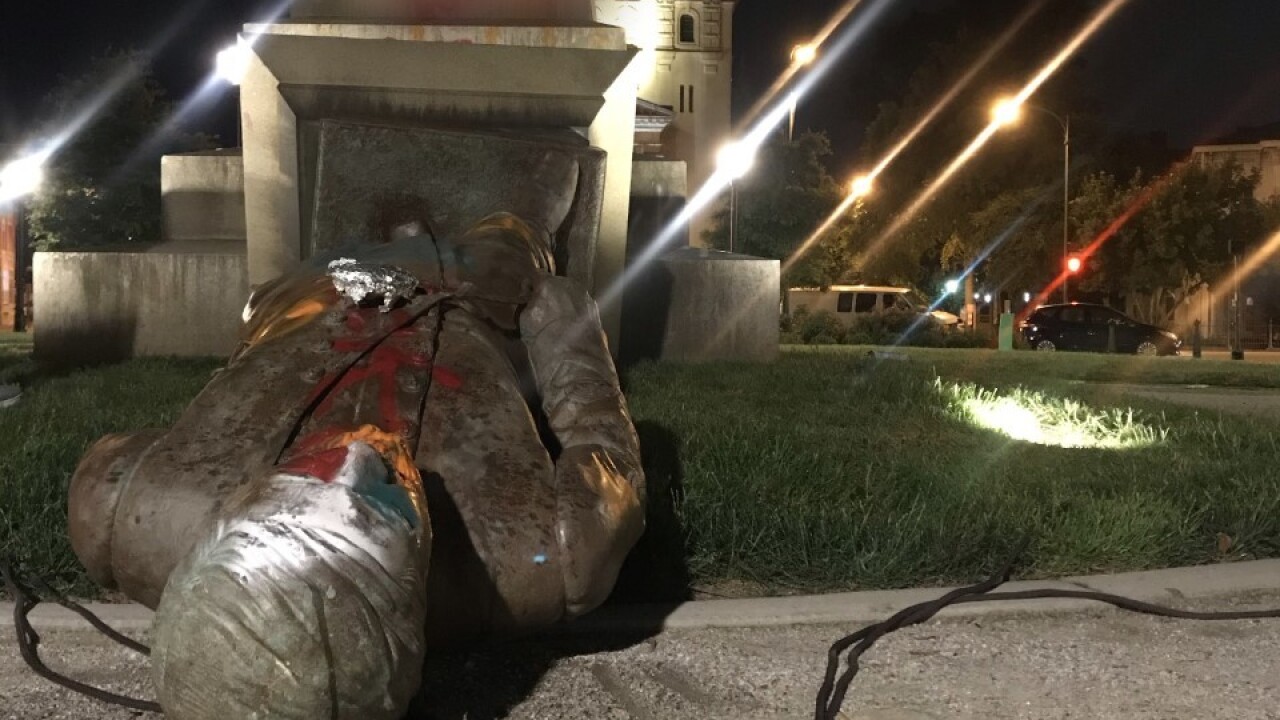 The 129-year-old statue to Confederate Gen. Williams Carter Wickham, which stands near a crosswalk leading to Virginia Commonwealth University’s main campus, was pulled from its base and tumbled to the ground around 10:45 p.m. The statue's base was also tagged with graffiti similarly to the Confederate statues on nearby Monument Avenue.

"A pretty surreal scene that just unfolded here at Monroe Park about 20 minutes ago," reporter Matthew Fultz said on CBS 6 News at 11 p.m. "Wickham was a Virginia lawyer, plantation owner and politician, as well as a Confederate cavalry general."

Fultz said that he and a photographer were editing video inside their car parked outside the park when they heard cheers.

"Several people spoke to us and said that the monument had just been pulled down," Fultz said.

Two sets of ropes were spotted on the ground and dozens of motorcycles were driving off and Fultz and his photographer arrived to the scene.

The year before Monroe Park reopened after a nearly two-year renovation in September of 2018, Clayton and Will Wickham, great-great-great-grandchildren of the general, contacted Richmond Mayor Levar Stoney and the Richmond City Council to ask the statue be removed from the park or be reinterpreted, citing the large number of people related to similar figures speaking out against similar memorials, VCU iPadJournos reported.

Besides sending a letter to Stoney, the Wickhams met with Alice Massie, president of the Monroe Park Conservancy, the non-profit shepherding the park’s renovation.

“Our ancestry is something we have to grapple with and can’t ignore as people, and it shapes who we are and there’s the history of privilege and shame that accompanies our family history,” Clayton Wickham said in an interview with the Richmond Times-Dispatch in 2017.

The statue to Richmond native and lawyer was erected in 1891, according to the Hanover County Historical Society.

The park is also home to a stone cross commemorating former Virginia Gov. Fitzhugh Lee, a Confederate General and the nephew of Robert E. Lee, as well as a monument to industrialist and Lost Cause proponent Joseph Bryan.

The park itself served as a Confederate instructional camp and later as a military hospital during the Civil War.

Earlier Saturday, protests were peaceful in the city. Richmond Sheriff Antionette Irving lead a march from the city jail to a peace fountain in a nearby park in the morning.

Earlier in the evening, another group marched in circles around the 130-year-old monument.

"We saw dozens of African American men dressed up in suits," Fultz said. "And they were joined by hundreds of people around the Richmond as they did eight laps around the moment in honor of George Floyd."

Virginia Gov. Ralph Northam on Thursday ordered the removal of state-owned Lee statue from Monument Avenue in Richmond as soon as possible.

“A New Day is coming not only for the Commonwealth, but for the United States and for the world,” Robert W. Lee IV, the fourth great-nephew of Confederate general Robert E. Lee said during a news conference about the removal. “To those of you who might be hedging your bets that this is not the time to do this, when will be the right time. When will it be right to address the white supremacy and racism that we have made an idol of my uncle out of?”

"I never thought I would see it come down," one man said about the Lee statue. " I like to see me and my brothers coming out here, doing big things like this."