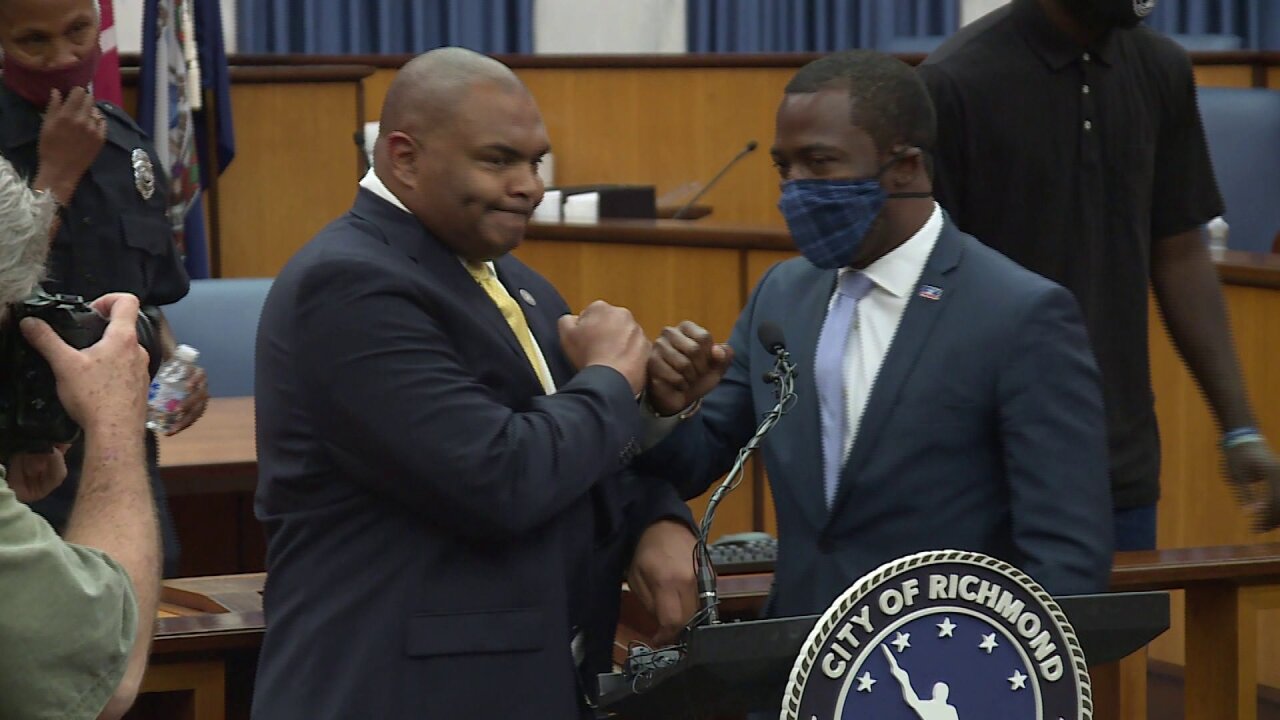 RICHMOND, Va., — On June 16, Richmond Mayor Levar Stoney announced the resignation of the city’s police chief and called for a nationwide search for his replacement. Stoney named that replacement about 11 days later.

Gerald Smith, the Deputy Police Chief of Charlotte Mecklenburg County in North Carolina, will assume the role of Richmond Police Chief on July 1.

Maj. William 'Jody' Blackwell, who stepped down from the position on Friday, will continue to serve as interim chief until then. Former Chief William Smith was asked to resign following weeks of unrest in the city.

“Chief [Gerald] Smith is ready to lead this department during these challenging times,” Stoney said during a Saturday afternoon press conference.

City Councilperson Stephanie Lynch (5th-District) said she found out about the incoming chief’s hire from the news.

“I believe that the Mayor must have been under a sense of urgency to find a better leader, to find someone that was able to step into that role, full time, and really get things started off on the right foot,” Lynch said.

City Council was invited to meet with new chief before Saturday afternoon’s press conference, Lynch and 4th District Councilperson Kristen Larson said. Larson said she was told about the invitation about an hour before the start of the meeting and did not attend.

“I guess there was some confusion with the resignation and the timing of the new hire. I didn’t know any of this was in the works,” Larson explained. “It’s impossible to be a part of it or contribute when you’re constantly getting notified at the last minute.”

Lynch and Larson said the newly hired chief has reached out to them personally.

“Chief [Gerald] Smith may be a good fit, but, I don’t know. I’m hopeful him coming in here will help with the unrest and there will be outreach and meaningful connections and dialogue with the community,” Larson said. "In the 4th district, there's a pretty strong interface with the community and at community meetings. I have found the police department to be very receptive."

A growing number of officials and health professionals have criticized the Richmond Police Department’s use of force and tear gas while dealing with protesters. Incoming Chief Smith said that tear gas could be useful to control crowds if “they’re used properly.”

“The sense that I get is that from new Chief Smith is that he is really going to focus on that key leadership and mentorship. He's not going to settle for complacency — at least that's what he is telling us,” Lynch said.

A city spokesman said Mayor Stoney’s hire was expedited because of the “ongoing unrest in the city.”

“In an ideal world, the Mayor would have liked to have extended and expanded the hiring process over a longer period of time, but given the ongoing unrest in the city, the Mayor thought it was important to bring in a proven leader, sooner rather than later, who could guide the department through the reforms we know are needed today and work alongside the community in reimagining public safety into the future,” said Jim Nolan, spokesman for the Mayor’s Office.

“It’s clear that the community wants a reform-minded Chief, and he found that in Chief Gerald Smith,” Nolan said in a statement. “We're very happy Chief Smith will be on the job July 1, and the Mayor believes he is the right leader at the right time for RPD and the City of Richmond."

On Sunday, readers of the Richmond Times-Dispatch found a “vacancy announcement” for the job of Richmond police chief.

“The ad was submitted by City Human Resources department on Thursday. Chief Smith was hired Friday afternoon and the city didn't get the chance to pull the ad before it was published by the newspaper on Sunday,” Nolan explained.

Claire Guthrie Gastañaga, the executive director for the ACLU of Virginia, criticized the “quick” hiring process.

“To move somebody here from out of state, put them in a permanent position, in a circumstance in which you've told the community they're going to be engaged and then you've turned around and done it without them sets that person up for failure,” Gastañaga said.

She hoped the nationwide search would have allowed for a diverse and representative pool of candidates, in addition to community input.

“Anytime you’ve had a police department that’s had three leaders in 10 days you know you have a problem,” Gastañaga stated.

Smith currently serves as the Executive Officer of Investigative Services in Charlotte-Mecklenburg. In that position, he commands criminal investigations including domestic violence, crimes against children, sexual assault, and homicide.

He has been with the Charlotte-Mecklenburg Police Department since 1991, rising in the ranks from community police officer to deputy chief.

Cheryl Nici-O'Connell runs the police advocacy group Richmond United for Law Enforcement. She said some citizens have called for a more harsher response to the protesters.

“Nobody at all has an issue with the right to lawfully assemble and have their voices heard. However, thousands of people invade our streets, block our traffic and infringe on our rights,” Nici-O'Connell said.

The former police officer questioned why the community didn’t weigh in on a new police leader.

“When you bring a totally new person from the outside that appears to be hand selected, how is that going to be beneficial? They may have the best credentials in the world, but you don’t have that community and departmental relationship,” Nici-O'Connell said.

She hoped the new leader can connect with officers.

Incoming Chief Smith said he wants to help heal and strengthen the relationship between Richmonders and the police department.

"Welcome Chief Smith. You do have plenty of people who support the police," one viewer wrote on Facebook.

Another wrote, "he's taking on a hard job."

The newly hired Smith said he planned to “listen” when he assumed the role on Wednesday.