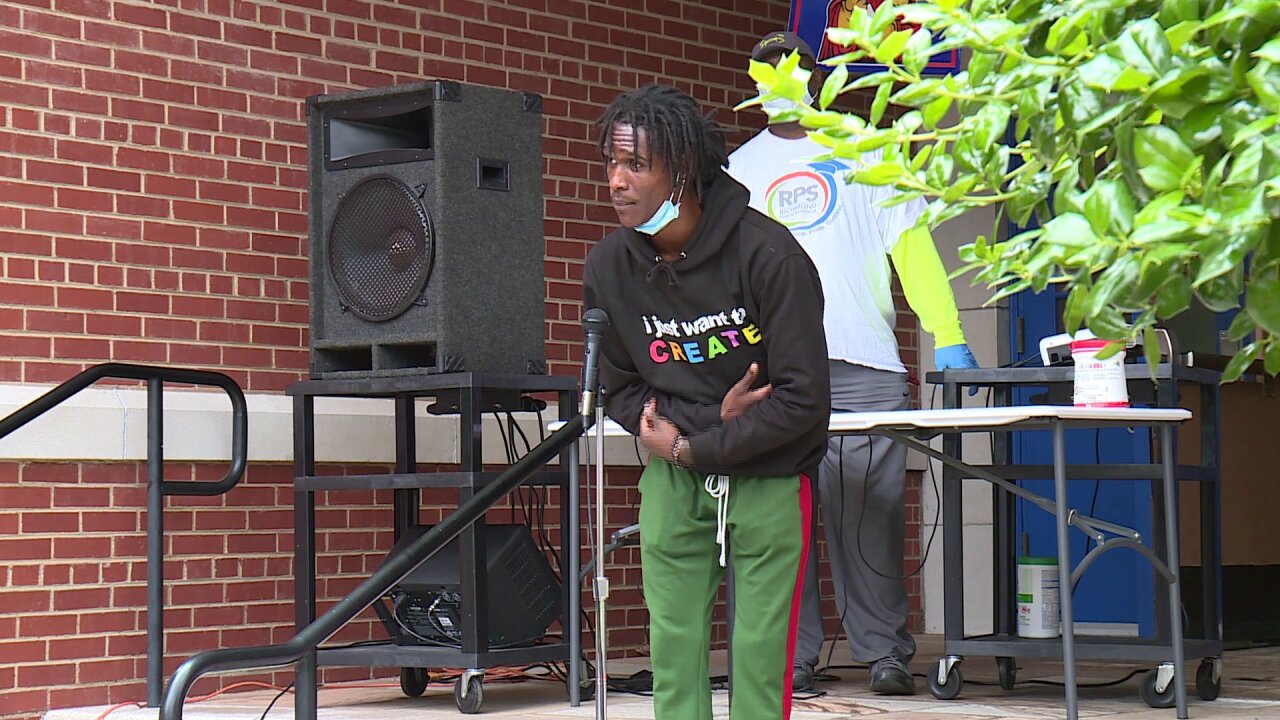 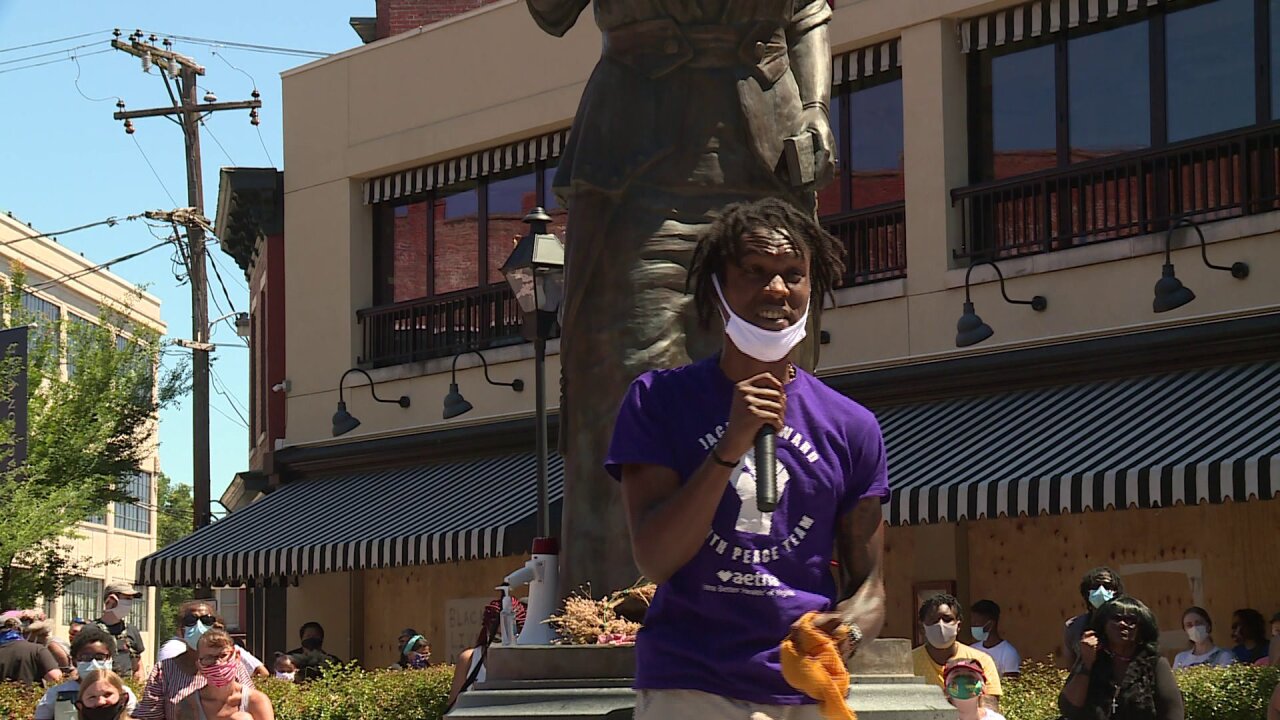 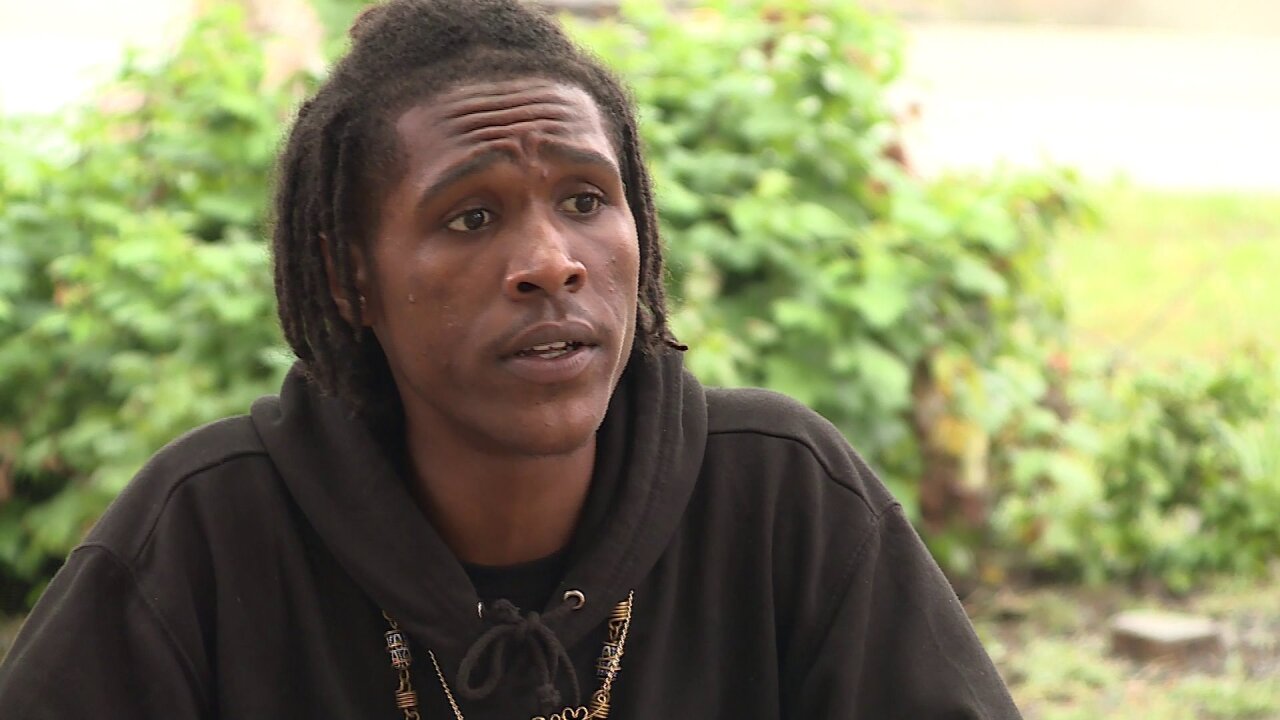 RICHMOND, Va. -- When Brandon Lovee wants to find his center to channel positive energy, he heads to the Broad Rock Community Garden, immersing himself in the dirt, grass, and garden beds.

“Broad Rock, it’s a beautiful part of Southside,” the 22-year old, who grew up on nearby Bainbridge Street, said. “Biggest thing is the energy, and the grounding.”

Brandon is a poet and performer who goes by the name B Lovee.

If the community garden is where he finds his personal center, the streets of downtown Richmond are where his work has been front and center during Black Lives Matter protests in the city.

In particular, B Lovee has been asked to deliver his poem titled, “Black Mothers; Black Rules,” dozens of times since the nationwide protests began in earnest in the River City.

“Our Black Mothers; they’ve been telling us these rules for so long,” he said.

Weaving in song lyrics and real world examples of young black men killed by police officers, the poem begins with a refrain repeated several times throughout: “Black mothers have a set of black rules that they tell their black sons before they leave their black house.”

“She says baby boy, I don’t care how cold you get, never walk around town with your hood on,” B Lovee exclaims with a knowing passion. “Baby boy you can’t play outside with those toy guns like your white friends. I don’t care if they’re B-B, Airsoft, water guns, or NERF… Your black skin tone rattles the men in blue nerves.”

“Black mothers have a set of black rules that they tell their black sons before they leave their black house,” he continues. “Because if you make the news before you make it home, she said I’ll look God in the face if and say you are too late.”

The poem is not new in so many ways. B Lovee wrote it four years ago, when he was just 18-years old, as a part of a book of his work titled “Cray/Sane.”

Readers physically flip the book to experience different portions of the story. The “Crazy” portions speaks to Brandon’s life experience growing up in South Richmond, and the “Sane” side includes several of his original poems and writings, including “Black Mothers; Black Rules.”

“That poem is in high demand; it’s in high demand again. It’s understandable. It’s four years old, but the pain is over 400 years old,” B Lovee said. “At any given time, I may not make it back home… I say in the poem, an unarmed black man is still armed with being black. So that’s powerful to me, man. George Floyd: unarmed. Tamir Rice: had a B-B gun.”

B Lovee called this movement the “new” Black Lives Matter movement. Although many activists have been putting in work on the issue for years now, B Lovee said the global energy behind it now is different.

The poetry is based, in large part, to the experiences of being a young black man growing up in South Richmond, B Lovee said. He said his family members have been cuffed by officers for a broke tail light, and he said an undercover officer followed him to his house one night after spending several hours in the community garden.

Many of his public performances conclude with this line from the poem: “To me, every day is a holy day. And I’m just trying to make it back to my family too.”

In this current moment, B Lovee said his words are not really aimed at black mothers and black sons: they already know them.

“Art translates emotions and translates energy in a way conversations aren’t always able to do,” he said. “It’s not a role that I’m playing, it’s not a position that I’m playing. This is just me at the end of the day. If you’re not part of a movement, just take some time to breath. Take some time to breath. And really listen, and really understand why people are crying out. Really understand where this pain, and this passion and this emotion is coming from.”

You can learn more about his work and download the e-book of “Crazy/Sane” on B Lovee’s website.