HANOVER COUNTY, Va. -- A family of four was displaced when their Mechanicsville home was engulfed by flames Saturday afternoon.

Hanover County Fire-EMS crews were dispatched to a home in the 7100 block of McCauley Lane just before 4:55 p.m.

"Upon arrival, crews found a single-story house with a walk-out basement well involved in fire," Hanover Fire-EMS Battalion Chief Gregory Martin said. "A neighbor reported that no one was home at the time."

Crews said the fire was under control and had been extinguished as of about 7:15 p.m.

Officials said that while no one was injured, a "number of pets" were inside when the fire started.

The Red Cross is assisting the two adults and two children who were displaced, fire officials said.

The Hanover Fire Marshal's Office is investigating what sparked the fire. 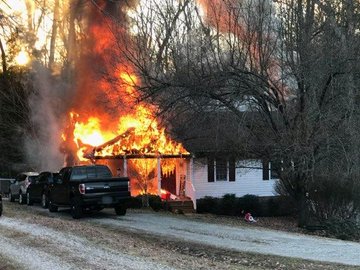