Pro-gun rally ends without incident, draws crowds from across the country 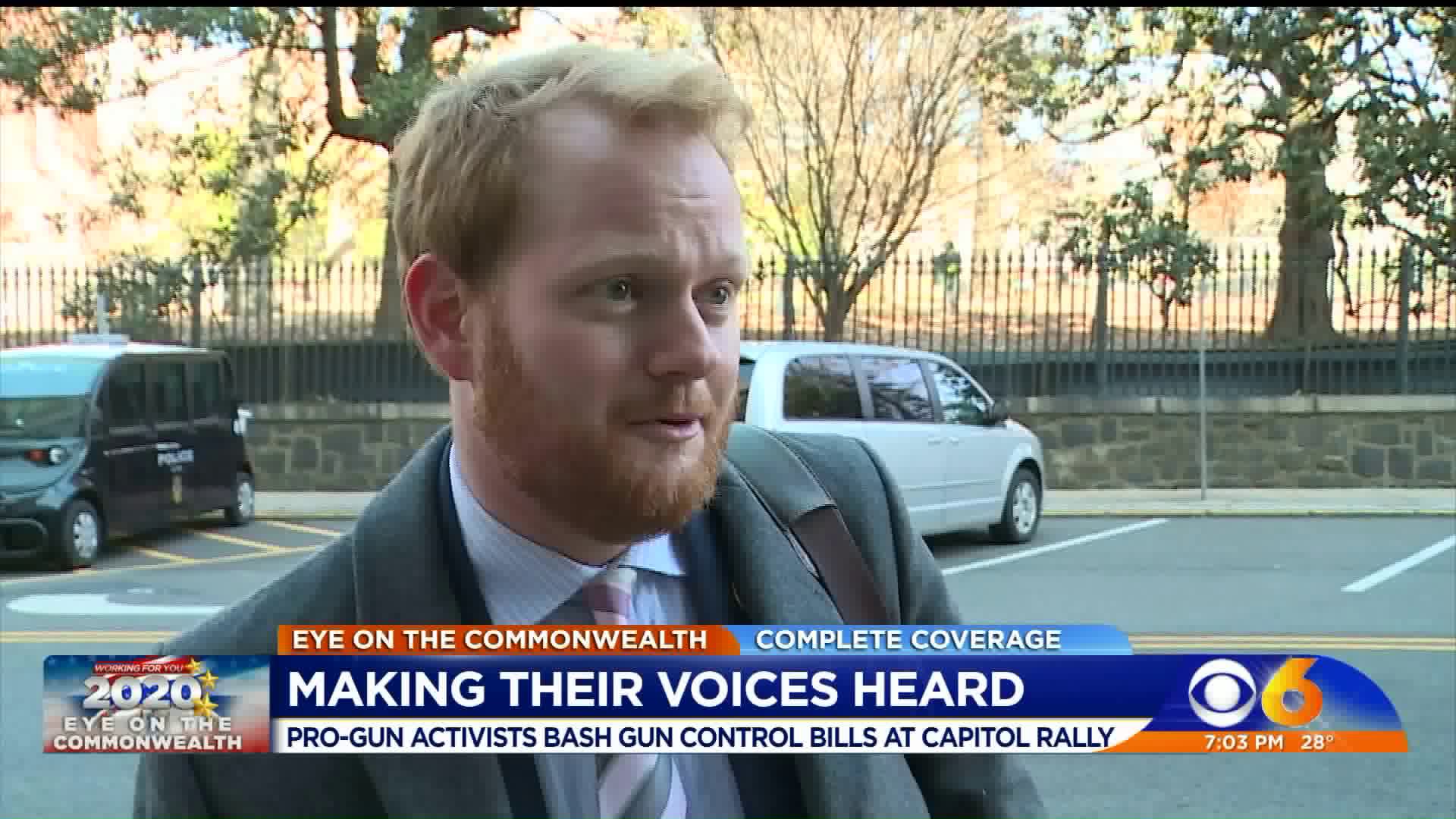 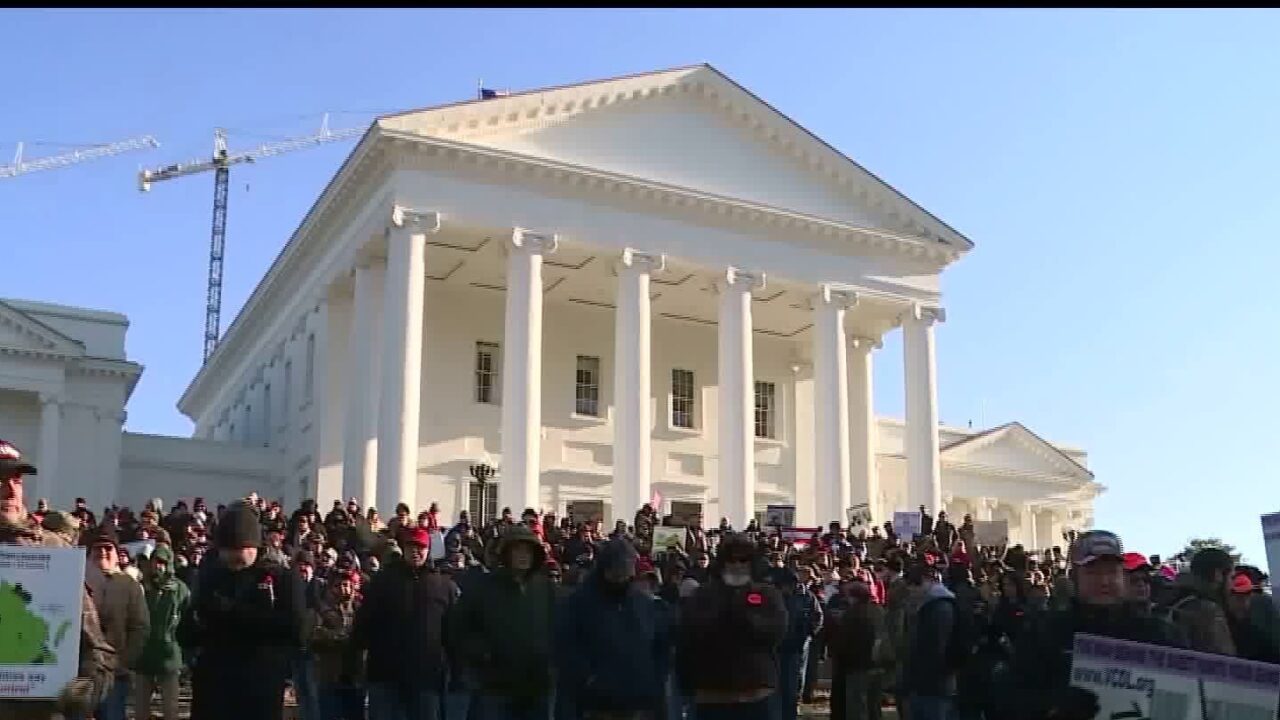 RICHMOND, Va - Despite heavily armed groups outside the perimeter and reports of potential threats of violence prior, a pro-gun rally on the steps of Virginia's Capitol ended without incident.  An estimated 22,000 people attended the Virginia Citizen Defense League's annual lobby day event, most in protest of proposed gun control bills Virginia Democrats plan to pass this year.

Gun owners from as far away as Arizona and Alaska made their way to Richmond for the event.  Despite the turnout, the political reality that Democrats have the numbers to pass bills to stiffen background checks, establish red flag laws, and reinstate a one handgun purchase per month policy was not lost on some in the crowd.

“In 2018, I predicted this," said Del. Nick Freitas, who is running to for Congress in Virginia's 7th district.  " I said if you’re going to insist that the way to deal with violence is to punish law abiding citizens, there will be no end to the restrictions of our second amendment rights.”

"Make no mistake, gun rights are civil rights,” said Tony Myers of Suffolk.  "In Virginia, gun laws were originally invented to deprive my Native American ancestors of our rights, and today he wants to do the same to all of you."

While Northam received much of the criticism during the rally and on the streets around the State Capitol, multiple officials said the showing demonstrated Monday was jump started by the "Second Amendment Sanctuary" resolutions passed by dozens of Virginia localities in late 2019.

The resolutions said that local bodies would not enforce new gun laws that threaten Second Amendment rights, but Virginia Attorney General Mark Herring and legal scholars have said they hold no legal weight.

“Governor Northam and this Democrat legislature are not interested in what we have to say about the second amendment and their overreach.  They have been bought and paid for and their minds are made up," said Culpepper Sheriff Scott Jenkins, who promised to deputize citizen to protect gun rights, in necessary.

“Disarming law abiding citizens does not make us safe.  It emboldens criminals, and puts us all at risk," said York-Poquoson Sheriff J.D. Diggs.

Governor Northam released a statement following the rally thanking the law enforcement teams for de-esclating what could have been a "volatile situation."

"Thousands of people came to Richmond to make their voices heard. Today showed that when people disagree, they can do so peacefully," the statement said.  "The issues before us evoke strong emotions, and progress is often difficult. I will continue to listen to the voices of Virginians, and I will continue to do everything in my power to keep our Commonwealth safe."

Del. Chris Hurst (D-Blacksburg) said the gun safety bills proposed by Democrats are constitutional and do not threaten the rights of responsible gun owners.

“I’m pretty clear that if you have your gun you can keep it.  We are not trying to infringe on the second amendment," Hurst said.  “Things that would not infringe on rights.  Things that would not even be noticeable to gun owners when they take effect July 1st, but would give extra tools to law enforcement and make sure those responsible gun owners, who claim they are responsible, are held responsible in case something goes wrong.”

Virginia voters lifted Democrats to power in November elections.  Many of the candidates, including Hurst, included reducing gun violence through state policy on their campaign platforms.

“The numbers I look at, rather than the potentially thousands of people who are here today, were the two million people who voted in November.  The results of that election are clear that Virginians wanted a Democratic majority in both chambers in order to take action to try and save lives from gun violence," Hurst said.

Phillip Goodwin knows Democrats have the numbers now to pass any bills they see fit.  The Newport News resident attended the Richmond rally and said he expects the moment will energize voters like him.

Virginia General Assembly elections do not occur again until November 2021.  The Virginia Senate has passed several gun control bills already, and both chambers plan to advance more bills in the near future.