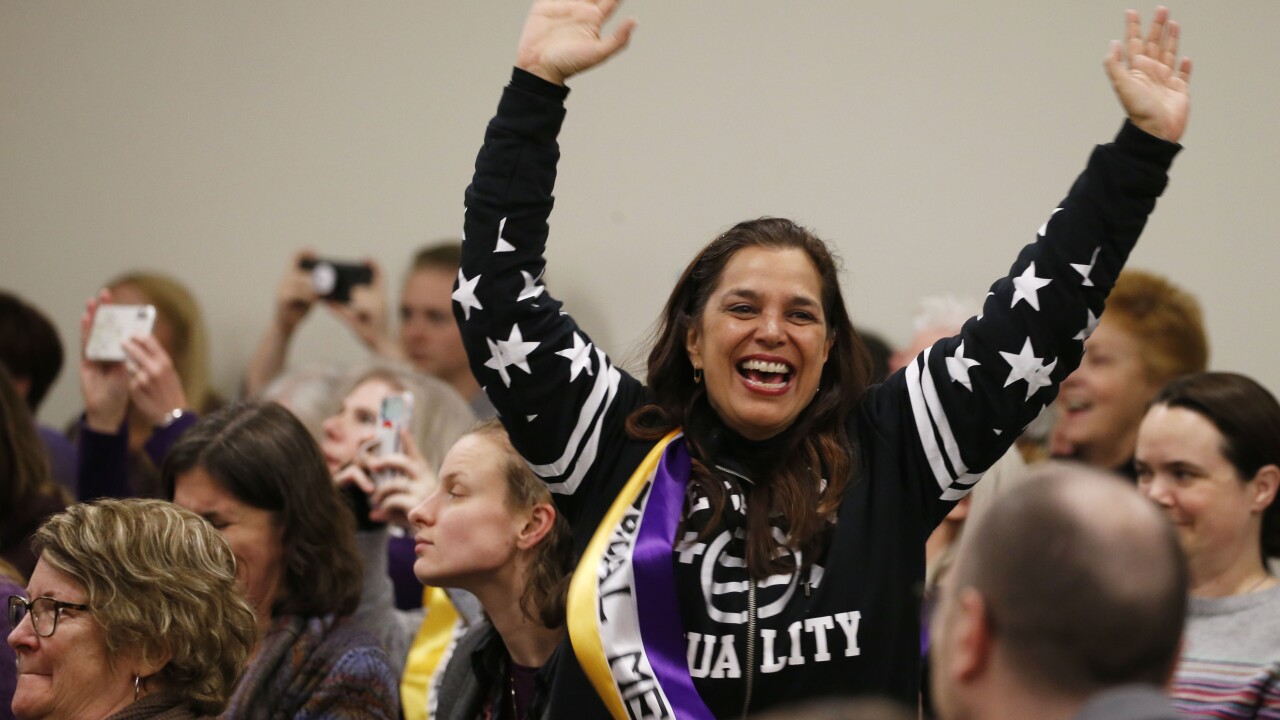 A supporter of the Equal Rights Amendment reacts to the Senate Privileges and Elections committee vote to report the ERA amendment the floor of the Senate during a Committee hearing at the Virginia State Capitol in Richmond, Va., Thursday, Jan. 9, 2020. (AP Photo/Steve Helber)

The Virginia House and Senate advanced ratification of the gender equality measure in a floor vote Wednesday.

ERA advocates say the amendment will enshrine equality for women into the Constitution, offering stronger protections in sex discrimination cases. Opponents warn it will erode commonsense protections for women and advance abortion access.

“It’s about time for women’s equal rights to be explicitly declared in our Constitution and we’re thrilled that Virginia will be the last state necessary to move this effort towards the finish line,” said U.S. Sens. Mark R. Warner and Tim Kaine (D-VA) in a joint statement. “Ratifying the ERA not only honors the work of all those who dedicated their lives to fighting for women’s equality, but also enhances our legal ability to fight future instances of gender-based discrimination throughout the country.”

The vote is a momentous victory for many women's rights advocates. But it is far from certain the measure will ever be added to the U.S. Constitution. The vote came decades after Congress sent the ERA to the states in 1972, passing it with bipartisan support.

A legal fight with the Department of Justice is likely ahead after last week they ruled that the deadline to ratify the ERA has expired.

“We conclude that Congress had the constitutional authority to impose a deadline on the ratification of the ERA and, because that deadline has expired, the ERA Resolution is no longer pending before the States,” the Justice Department’s Office of Legal Counsel said in an opinion.

House Speaker Eileen Filler Corn (D-Fairfax), who became the first woman Speaker in Virginia history, said she felt the gravity of the moment after reading the final vote tally in her chamber.

"We've been fighting for this a long time, many long before us.  Standing on the shoulders of so many fighting for equality and equity.  So it's exciting, historic for sure," Filler Corn said. "It's something that's been past due, and it's about time to enshrine women in the Constitution.  To stand up there myself as the first woman Speaker with the gavel at that moment is historic and exciting for me."

Sen. Jennifer McClellan (D-Richmond) said she thought of both her children prior to the vote, saying "it's our time."

"Given our history, it is poetic justice for Virginia to put the ERA over the top," McClellan said.  "I want to be able to tell both Samantha and Jack when I come home that the U.S. Constitution guarantees both of their rights."

Some Virginia Republicans voted in favor of the ERA Resolutions in both chambers despite voicing reservations about whether its validity will be upheld by the courts.

"We have an incredible society with laws that make it illegal to discriminate based on sex already," said Del. John McGuire (R-Goochland).  "That's why I would say the ERA is outdated, it's expired, and I think it harms women because several states have used the langue of this broadly written bill to use taxpayer funds to pay for abortion."

"The ERA does nothing for true equality of women, but uses women as a political pawn to push the liberal agenda," said Sen. Amanda Chase (R-Chesterfield).

Advocates and democratic lawmakers who fought to pass the ERA over the years celebrated in the House and Senate galleries following the votes, with hugs and some tears.

"We are thrilled.  We know we have more work to do, we're eager to do it, and we want everyone to be with us," said Carrol Jenkins, who travelled from New York to witness Virginia's ERA vote.  "Women and girls and men and women can take pride in this day at what Virginia did.  This state stood up for equality."

"I would say it's important to include half the population of a country in the most important document of that country and be protected legally," said Kim Drew from Chesterfield.  "We're getting our job done in Virginia, and that's all we can do.  If you don't pass it, if you don't fight for it, then what is the point?"

Critics of the ERA resolutions said for the amendment to truly take affect ERA efforts should start over again now.