The 10 biggest sports stars of the decade 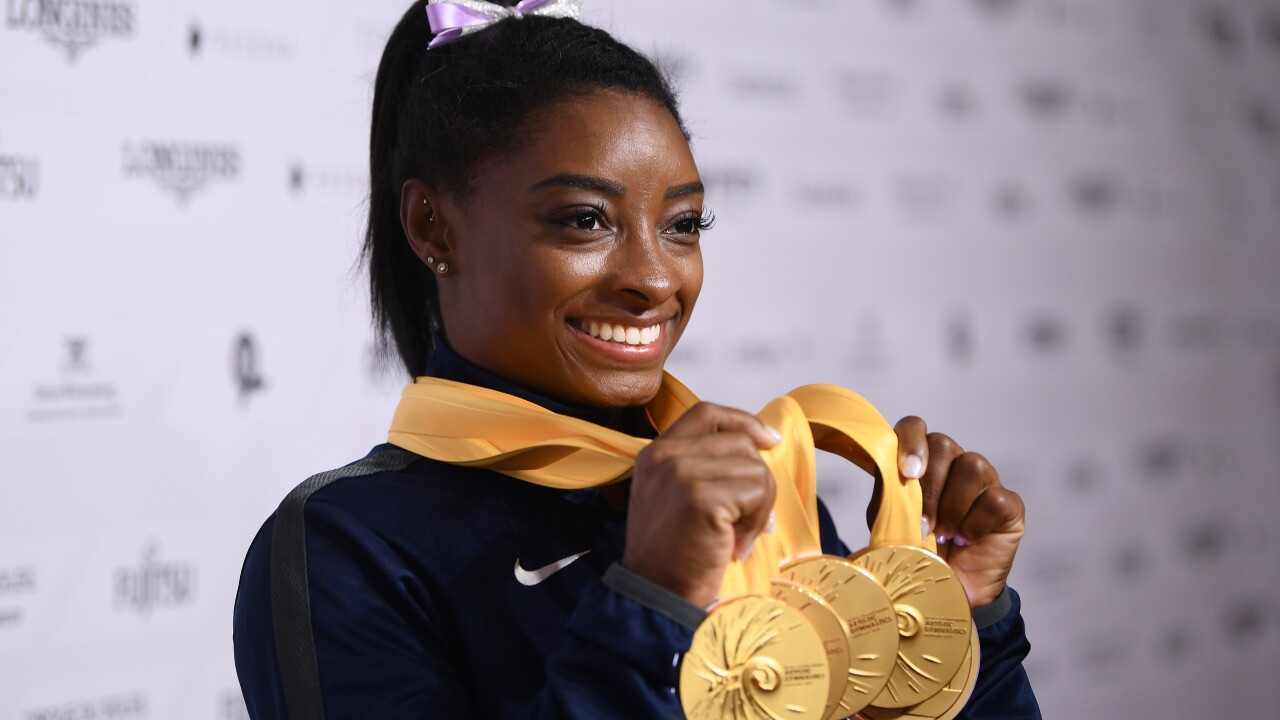 STUTTGART, GERMANY – OCTOBER 13: Simone Biles of USA poses with her Medal haul after the Apparatus Finals on Day 10 of the FIG Artistic Gymnastics World Championships at Hanns Martin Schleyer Hall on October 13, 2019 in Stuttgart, Germany. (Photo by Laurence Griffiths/Getty Images)

As a memorable sporting decade draws to a close, we take stock of the men and women who’ve set the standard for others to follow, on and off the field.

Here are our selections for the top 10 — one for each year of the 2010s — based on the brightest champions from sports which have global fan bases.

It is difficult to underestimate the impact that Usain Bolt had both on his chosen sport and in the capturing the imagination of the global sporting community in a manner last seen when Muhammad Ali was in his prime.

He entered the decade as the undisputed fastest man on Earth, having completed the 100-200m sprint double at the 2008 Beijing Olympics before setting world records in the 100m (9.58 seconds) and 200m (19.19 seconds) the following year — marks which still stand today.

It was a tough act to follow, but the fastest man on the planet continued to dominate. At the 2012 Olympics in London and the 2016 Games in Rio Bolt repeated his sprint double triumph and anchored the Jamaican 4x100m relay team to gold.

He retired after the 2017 world championships before flirting with a career in professional football.

Other track and field notables: Allyson Felix, who broke Bolt’s medal record at the 2019 championships in Doha; Eliud Kipchoge, marathon runner extraordinaire and first man to run the distance in under two hours.

LeBron James is one of the greatest players in NBA history, mentioned in the same breath as Michael Jordan and still going strong at 35 with the Los Angeles Lakers.

His decision in 2010 to leave the Cleveland Cavaliers and join the Miami Heat sent shockwaves through the game, personifying a new era of player power, but it bore fruit with consecutive NBA championship wins in 2012 and 2013 after a chastening defeat to the Dallas Mavericks in the Finals the year before.

Returning as a hero to a faltering Cavaliers team in 2014, James transformed the fortunes of the franchise, leading them to Cleveland’s first professional sports title in 52 years with their triumph in the 2015 Finals.

Between the Heat and the Cavs, James appeared in eight consecutive NBA Finals — a feat few players have ever accomplished.

With a scoring average of close to 27 points per game throughout the decade while also averaging about 8 rebounds and assists, James has been remarkably consistent, often reserving his best form for the playoffs. Outside of the NBA, James also led the US team to gold at the 2012 Olympics.

A goal-scoring machine on the pitch and a social media colossus off it, Ronaldo’s exploits made him the most talked-about sports star of the decade. And at 34, he shows no sign of slowing up.

After spending the early part of his career on Alex Ferguson’s successful Manchester United team, Ronaldo transferred to Real Madrid for a then-world record fee for the 2009-10 season.

With Lionel Messi’s Barcelona dominating Spanish and European football, Ronaldo had the incentive to spur Los Blancos to former glories — and how.

Scoring at the incredible rate of just over a goal per game, Ronaldo helped Real to two La Liga titles and an unrivaled run of success in the Champions League with four wins in five years from 2013 to 2018.

International success came as well for Ronaldo with Portugal’s national team. They won the European Championship in 2016 and Nations League in 2019.

Last season, Ronaldo joined Juventus and his goals were a factor again as the Turin giant won Serie A, leaving him with championship titles in England, Spain and Italy — another record for a remarkable player.

Like his archrival Cristiano Ronaldo, Messi’s appetite for sporting success shows no sign of abating as the decade draws to a close.

At 32, Messi won the Ballon d’Or as FIFA World Player of the Year for the sixth time earlier this month. There would be few who would bet against him claiming that honor yet again as he continues to weave his magic with Barcelona.

A one-club man to the core, Messi has helped Barca to six La Liga titles in the decade as well as two Champions League crowns and five Copa del Rey successes.

His statistics almost defy belief: 521 goals scored in the past 10 seasons, along with 191 assists. He’s a deadly finisher as well as a prolific creator.

Only international success with an Argentina team which has failed to live up to its potential has eluded the magical Messi, but his tally of 70 goals in 138 games for his country is still impressive.

Other soccer notables: Marta, the Brazil woman’s international who set a new mark for goals at a World Cup with her 17th at the 2019 tournament in France; Andres Iniesta, Messi’s longtime teammate at Barcelona, who scored the winning goal in the 2010 World Cup final for Spain.

Other players like Rory McIlroy, Brooks Koepka and Jordan Spieth may have better records in majors since 2010. But the sheer impact of his return to winning ways over the past two years elevated Tiger Woods to another level of sporting superstardom.

Bedeviled by well-chronicled personal problems at the start of the decade and by crippling injuries for much of it, Woods looked a spent force as he slumped outside the top 1,000 in the golf ranking and contemplated retirement.

But with a remodeled swing and a new commitment to fitness, Woods stormed back with a vengeance in 2018, winning the Tour Championship at East Lake, his first PGA Tour success since 2013, when he won five times.

It acted as a springboard for the ultimate comeback story, his stunning triumph in the US Masters earlier this year. It was his 15th major title and first since 2008.

Celebrating his 44th birthday as the new decade begins, Woods has Jack Nicklaus’ record of 18 majors firmly in his sights.

Other golfing notables: McIlroy and Koepka, with four major titles apiece; Inbee Park, winner of seven women’s majors since 2010 and an Olympic gold medal in Rio in 2016.

Serena Williams is statistically the greatest player in the history of tennis, winning 23 grand slam singles titles, 16 in doubles and four Olympic gold medals, including two at the 2012 London Olympics.

The first part of her career saw Williams battle for dominance with her elder sister Venus. This decade has seen her repel the advances of a string of more youthful contenders and add 12 grand slam singles titles to her tally.

She has also had to battle illness and injury and was bedridden for weeks after the birth of her daughter Alexis Olympia Ohanian Jr. in September 2017.

The last of her grand slam singles crowns, the Australian Open in 2017, came when she was several weeks pregnant and beat Venus in an emotional final.

Since her return to the WTA Tour following childbirth, she has still punched above her weight, reaching four grand slam finals (but losing them all).

It’s not clear whether 38-year-old Serena can finally surpass the all-time record for slams she jointly holds with Australian Margaret Court. But her significance far exceeds her playing record, as she is an iconic figure on and off the court.

Other tennis notables: Novak Djokovic, winner of 15 slams in the decade; Rafael Nadal and Roger Federer, the three players still dominating the men’s game well into their thirties.

Michael Phelps is famous for winning eight gold medals in a single Olympics, Beijing 2008. But the ‘Baltimore Bullet’ did not rest on his laurels after this remarkable feat, which is unlikely to be beaten.

The 2012 Games in London saw Phelps continue his gold glut for the all-conquering US swim team as he claimed four gold medals and two slivers, taking him past the previous best total of 18 held by Russian gymnast Larisa Latynina and stretching the record to 22.

Phelps announced his retirement after the Games, later revealing that he had been suffering from mental health problems and had even contemplated taking his own life.

A return to swimming helped Phelps battle his demons. He found yet more glory at the Rio Olympics, where he won five golds, including a fourth straight in the 200m individual medley, plus a silver. That left him the most decorated Olympian of all time with 28 medals, 23 of them gold.

Other swimming notables: Katie Ledecky, the US freestyle swimmer who has won five Olympic golds and 14 world championship golds between 2012 and 2019; Caeleb Dressel, winner of 13 gold medals for the US at the last two world championships.

Simone Biles is only 22 but has already set new standards in her sport. Fellow American gold medalist Mary Lou Retton described her as the “greatest gymnast ever,” and few experts would disagree.

The first of Biles’ 19 world championship gold medals came at the tender age of 16 back in 2013. Her dominance shows no sign of waning as she won five golds in the global championships in Stuttgart earlier this year.

She will go into the Tokyo Olympics in 2012 looking to add to her tally of four golds from the Rio Olympics after which she took a break from competition. Like Phelps, she has also battled personal problems with great courage..

Biles revealed after her Rio success that she has to take medication for ADHD and in 2018 was named as one of the gymnasts sexually abused by disgraced US team doctor Larry Nassar, who is serving a prison sentence of between 40 and 175 years.

Japanese fans will be hoping Kohie Uchimara recovers from injury to compete in Tokyo. Uchimara was the male gymnast of the decade with successive all-round golds at the London and Rio Games and a string of world championship victories.

The first black driver to win a Formula One world championship, in 2008, Lewis Hamilton has won five world titles in the past six years with the help of his formidable Mercedes team.

As hungry for victory as ever, the British ace has taken the checkered flag in F1 racing 84 times, seven short of the record of 91 wins by Michael Schumacher.

He is also one short of Schumacher’s record of seven F1 world crowns, having pulled ahead Juan Manuel Fangio this season in the all-time list.

Hamilton’s rivalry with Ferrari’s Sebastian Vettel, who claimed the first four F1 titles of the decade while with Red Bull, has undoubtedly provided the impetus for his continued success. With newcomers Charles Leclerc and Max Verstappen snapping at his heels, he cannot rest on his laurels.

Since 2010 Brady has led his New England Patriots to five Super Bowls, winning three, including the 2019 edition with a 13-3 victory over the Los Angeles Rams.

The 42-year-old quarterback has won six Super Bowl rings, all with the Patriots, during his remarkable career. He also set a string of Super Bowl records, including becoming the oldest player (39) to be named MVP after the Pats’ 34-28 overtime thriller against the Falcons in 2016.

And Brady’s remarkable consistency continues into the current season, helping the Patriots to the playoffs for the 11th straight year while passing Peyton Manning for the second-most touchdown passes in NFL history, six behind all-time leader Drew Brees of the New Orleans Saints.

Outside of our top 10, there were a host of other remarkable performers and performances.

Boxer Floyd Mayweather remained undefeated in his eight fights in the decade, including wins over Manny Pacquiao and Saul Alvarez and a stoppage of MMA star Conor McGregor.