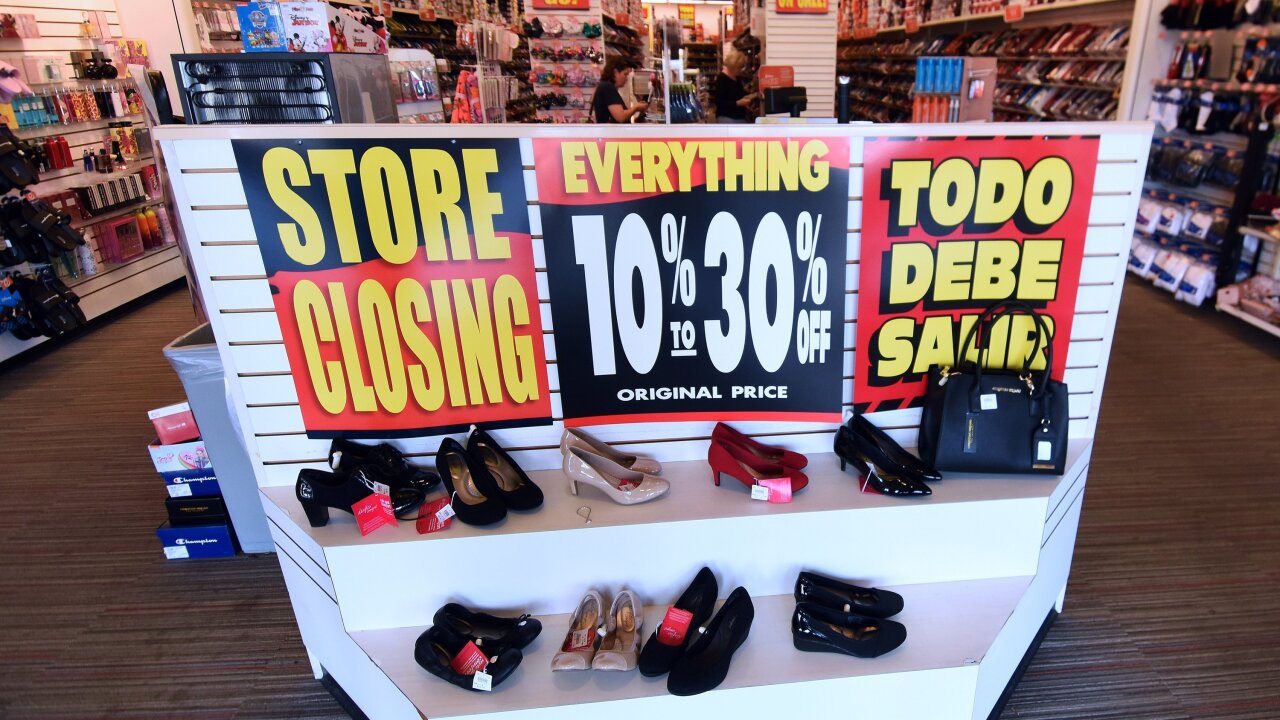 US retailers announced 9,302 store closings, a 59% jump from 2018 and the highest number since Coresight Research began tracking the data in 2012. Bankruptcies in the retail sector intensified this year and many struggling chains cut stores.

2019 was another bruising year for many American retailers, despite healthy consumers and a strong economy.

This year, US retailers announced 9,302 store closings, a 59% jump from 2018 and the highest number since Coresight Research began tracking the data in 2012. Bankruptcies in the retail sector intensified this year and many struggling chains cut stores. That led to a spike in closings.

Payless, Gymboree, Charlotte Russe and Shopko all filed for bankruptcy and closed a combined 3,720 stores, according to Coresight. The majority of those were because of Payless, which filed for its second bankruptcy in February and shuttered 2,100 US stores.

Thousands more store closings could be on the way in the coming years as online shopping continues to replace purchases at physical stores and eat into retailers’ profits. High debt levels and rent have also burdened traditional retailers.

Online sales make up around 16% of retail sales today, but they will rise to 25% by 2026, UBS analysts estimated in a research report.

That could force up to 75,000 mores stores to close by 2026, including more than 20,000 clothing stores and about 10,000 consumer electronics stores, UBS estimates. Thousands of home furnishings and sporting goods stores will also need to close as online shopping grows rapidly.

Even thriving retailers such as Walmart and Best Buy quietly closed a handful of their stores — although those companies are opening some, too. And department stores such as Nordstrom and Kohl’s are shuttering a few stores each.

Moody’s lowered its outlook for department stores heading into the holiday season.

“Despite a very favorable consumer spending environment, department stores have yet to catch a break,” analyst Christinia Boni said in a research report.

Michael Brown, partner in the consumer and retail practice of consulting firm AT Kearney, said that he expects store closings to outplace openings in 2020 as retailers continue to “right size” their footprints.

Some retailers are opening stores, however. The Coresight report noted that this year, retailers announced 4,392 openings this year. The discount sector in particular is growing. Dollar General announced it opened 975 stores this year, a similar number to previous years.

“We continue to believe we operate in one of the most attractive sectors in retail,” Dollar General CEO Todd Vasos said on a call with analysts earlier this month. Dollar General will open 1,000 new stores next year and it plans for an additional 13,000 around the country.

Meanwhile, discount chains like Ollie’s Bargain Outlet and Five Below expanded this year. Discount grocer Aldi and opened hundreds of stores in the United States to reach customers who want to shop for cheap groceries, and TJX continued its rapid growth, opening nearly 200 stores.

Some parts of the retail business could bounce back next year.

“Malls are benefiting from the refreshing influence of Generation Zers, who prefer to shop in stores and are driving traffic back to brick-and-mortar retail,” real estate firm CBRE analysts said in a research report.

Online brands will open stores, food and beverage concepts are growing, gyms and fitness concepts are spreading, and pop-up stores continue to be a popular tool for many retailers.

A healthy economy should also continue to bolster many retailers and malls in the coming year.