RICHMOND, Va. -- Dozens of demonstrators rallied at Richmond's Capitol Square Saturday afternoon in support of a new start for Lebanon as protests continue in the country.

Organizers said the event was to show solitary with Lebanese people who have dealt with "decades of corruption and government mismanagement" by leaders in the country. 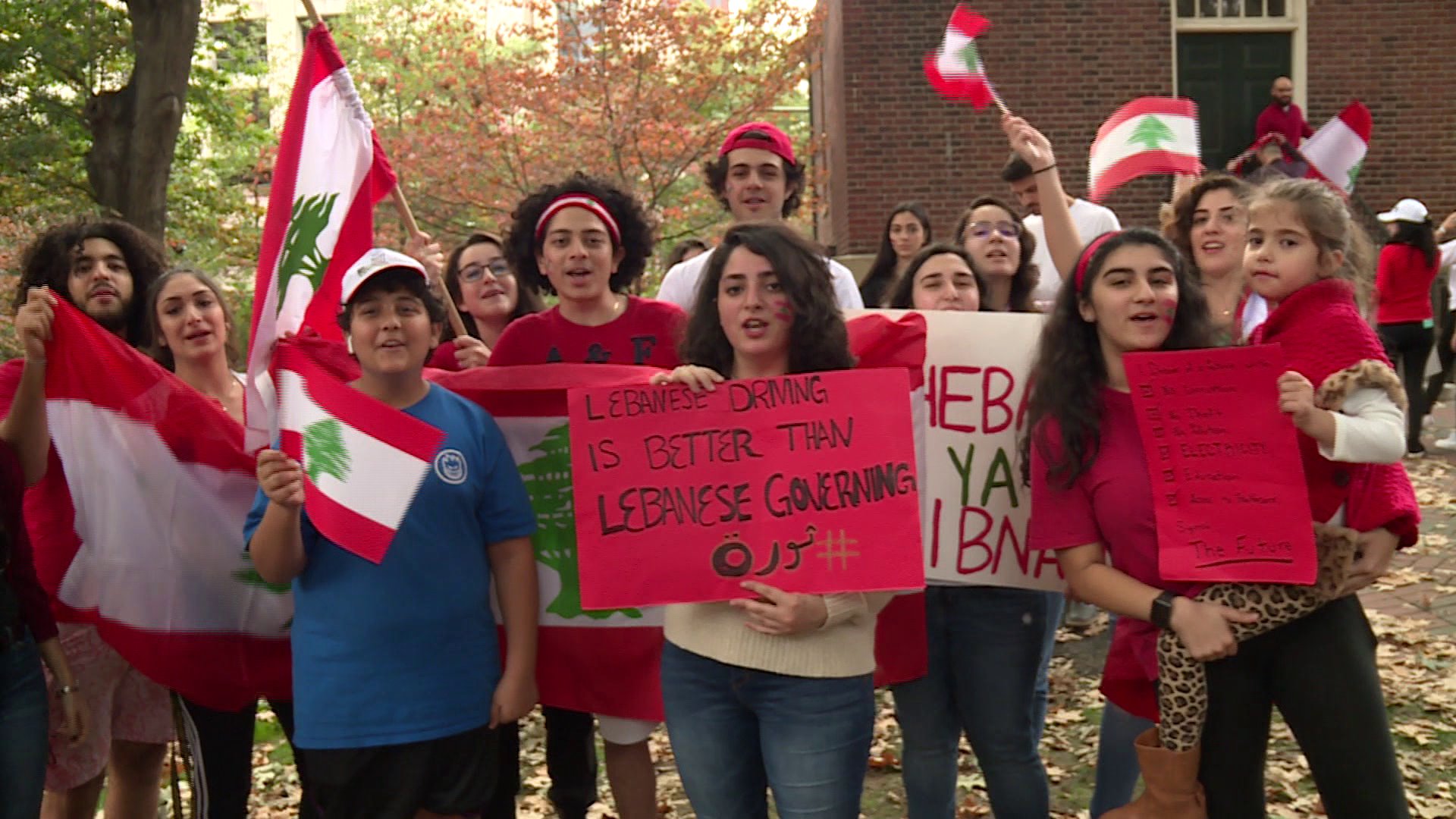 Daylight filters through a large gap at the back of an abandoned cinema in central Beirut. The silhouetted figures of protesters gather on the steps to listen to a political talk by Charbel Nahas.

For days, the two-time former minister and progressive party leader has attracted large crowds, as he shares his ideas for a political transition to a non-sectarian government. Today, he takes center stage in the crumbling amphitheater.

"The regime has already fallen!" says Nahas in a rousing 20-minute speech. "I want you all to look around you and see that the state hasn't always been this bad, and it will change."

The protesters cheer. Calls for "revolution" bounce off the walls of the structure, known as The Egg. The moustachioed Nahas stands against the backdrop of graffiti that says: "Black. Poor. Black. Gay. Trans."

It's a scene that is emblematic of Lebanon's so-called October Revolution -- people from across Lebanon's deep socioeconomic divide banding together in the country's dwindling public spaces to protest the country's financial crisis and political elite. The working class and educated middle class have been reclaiming empty property long shut off to the public. Same-sex couples have been marching next to more conservative women in headscarves. Street vendors and university students have been joining hands to dance the traditional Dabke.

But the country is standing at a political crossroads, activists and analysts say. Protest leaders say the political elite have two options: continue to preside over further chaos and face imminent economic (and even state) collapse, or undergo a peaceful transition from sectarian leadership to civil governance to rescue the country.

The protest movement came about after months of rapid economic deterioration, with increasing pressure straining the dollar-pegged Lebanese pound and around a third of the country's population living under the poverty line and sinking deeper into destitution.

For more than nine days, the huge gatherings of Muslim, Christian, secular, progressive and religiously conservative people served as a display of revolt that has jolted the country's political establishment. Lebanon's banks have been closed for over a week fearing financial collapse. Promises of economic reform by the country's heads of state -- President Michel Aoun and Prime Minister Saad Hariri -- have failed to quell the outpouring over protesters. Aoun and Hariri said they believed the country's sectarian system has failed, but offered no political concessions.

On Friday, Hassan Nasrallah, head of the Iran-backed Lebanese political and militant group Hezbollah, threw his weight behind the government by discrediting the movement, saying parts of the protests were driven by "invisible leaders" as part of an "international conspiracy." He said that the more sincere protesters ought to choose representatives to negotiate a path forward with the government.

The uprising is so far leaderless, with its demands amounting to little more than a hurling of insults at political figures and protest chants. But the shapelessness of the movement, activists say, is proof of its authenticity as well as of the depths of people's frustration with Lebanon's group of sectarian leaders who have ruled since the country's 15-year civil war began in 1975.

"What is required right now is an overhauling of the whole economic system, and this is not something that this political class can do," said activists and journalist Jamal Ghosn. "We are facing a major economic crisis that requires a lot of responsible action. But I don't see that they've been taking it seriously. And I don't see that that has changed over the past week."

As discontent with the country's sectarian leaders brewed in recent years, multiple nonsectarian groups have cropped up on the political landscape. During municipal elections in Beirut in 2016, a group of civil society activists known as Beirut Madinati led a robust campaign against sectarian candidates, but eventually lost. In Lebanon's 2018 parliamentary elections, a coalition of nonsectarian activists known as Kolouna Watani also burst onto the elections' scene. They won only one parliamentary seat.

"One year ago, the same persons who are demonstrating now and shouting that they are no longer Sunni, Shia, Maronite, etcetera, were voting for (the sectarian leaders)," said Charbel Nahas in an interview with CNN after his speech at The Egg.

Nahas is a former government insider and World Bank economist. As a two-time minister, he spearheaded reforms in the telecommunications sector, by boosting the country's lagging Internet with 3G. In the labor sector, he unsuccessfully tried to push through universal health coverage, and eventually stepped down from his post. In 2015, he founded non-sectarian opposition party Mouwatinoun wa Mouwatinat fi Dawla (Citizens in a State). He says his group anticipated that endemic state corruption would spiral the country into the crisis it finds itself in today, and has been organizing for that moment.

In central Beirut's Martyrs' Square, Nahas's party erected a tent in the midst of the mass protests. Members cover 14-hour shifts, speaking to passersby and holding rallies about plans for political transition from the country's sectarian leadership.

"Change is never easy. It's risky. It's a historical opportunity," says Nahas. "What happened until now is that the existing de facto regime has fallen down. It is no longer functional."

But he argues that the situation could easily backfire, possibly erupting into violence, as a tanking currency threatens the foundations of Lebanon's already decrepit social order. "The transitory period can lead to a different regime ... or it could lead violence. This is a very high responsibility and we are doing our best," says Nahas.

The first victims of the financial crisis, argues Nahas, are the political elite, who he equates to "tribal chiefs" leading a hodgepodge of communities along religious sectarian lines that can no longer be sustained.

"There is no more fuel in the engine," he says, adding that it is time for the country's leaders to come to terms with this. "If (leaders) transfer power willingly to a new system ... then they would have done something that the Lebanese will thank them for."

The breakdown of the state is already beginning to show. As protesters fill the streets of the country's urban centers, forcing the closure of highways and shutting their businesses, bustling Lebanese cities have become ghost-towns.

But it is a bullet that protesters say they are willing to bite in a bid to shake off widespread corruption.