This county has the lowest unemployment rate in Virginia

RICHMOND, Va. — The Staunton-Waynesboro area had the lowest unemployment rate in August of all metropolitan areas in Virginia — and one of the lowest in the country, according to data released this week by the U.S. Bureau of Labor Statistics.

Unemployment in Staunton, Waynesboro and Augusta County was 2.5% in August. Of the approximately 390 metro areas in the U.S., only 21 had a lower unemployment rate.

All Virginia metro areas were below August’s national unemployment rate of 3.7%. Unemployment was below 3% in the Charlottesville, Winchester, Harrisonburg, Roanoke, Richmond and Blacksburg-Christiansburg-Radford metro areas. The rate was 3.1% in the Virginia Beach-Norfolk-Newport News areas and 3.2% in the Lynchburg and Washington-Arlington-Alexandria areas.

All metro areas of Virginia saw their rates drop from August 2018 to this past August. The Harrisonburg area had the biggest decline — from 3.2% to 2.7%.

The Bureau of Labor Statistics released the metro-level data for August on Wednesday. That was a follow-up to an announcement on Sept. 20 that the national unemployment was 3.7% and Virginia’s statewide unemployment rate was 2.8% in August. 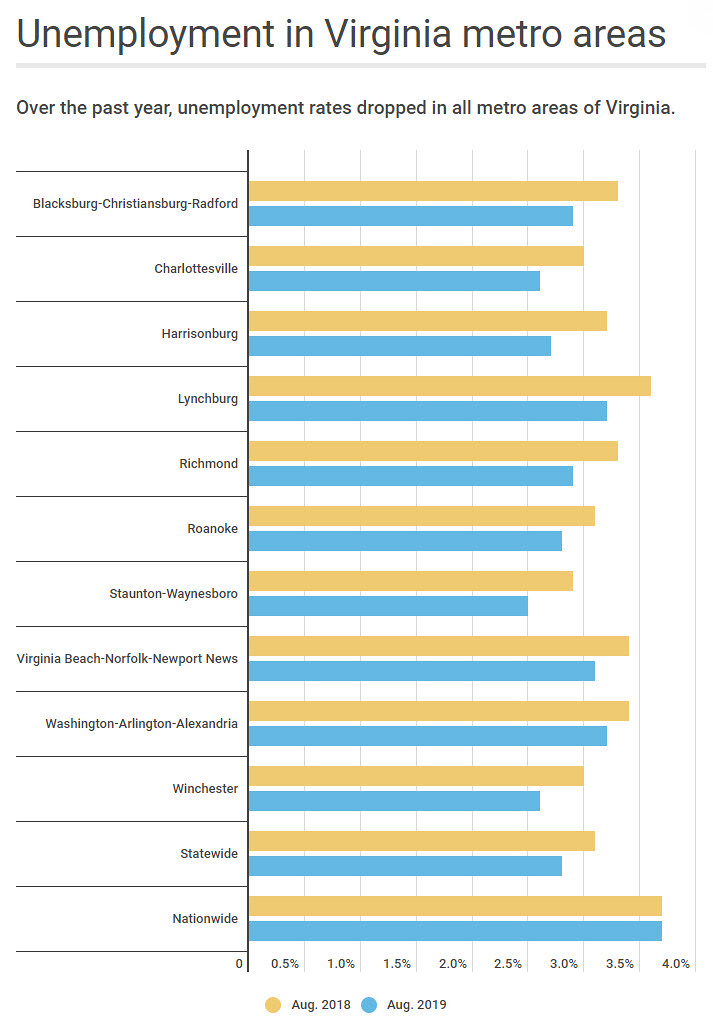 Also on Wednesday, the Virginia Employment Commission released the August unemployment rates for the state’s cities and counties. The data showed that compared with the previous year, unemployment rates went down in 124 of the 133 localities.

Even so, 27 cities and counties had unemployment rates at or above the national average in August. The localities were largely in the southwestern and southern parts of Virginia.

The highest levels of unemployment in August were in Buchanan County (5.7%), Petersburg (5.4%) and Danville and Dickenson and Wise counties (all at 4.9%). Emporia, Lexington and Lee County all had unemployment rates above 4.5%.

Arlington County continued to have the lowest unemployment rate in the state at 1.9%. The city of Fairfax was at 2%, and Alexandria and Falls Church were at 2.1%.

The Bureau of Labor Statistics announced Friday that the national unemployment rate had dropped even lower — to 3.5% — in September. “The unemployment rate is the lowest it has been since May 1969 — over 50 years ago,” the White House said.