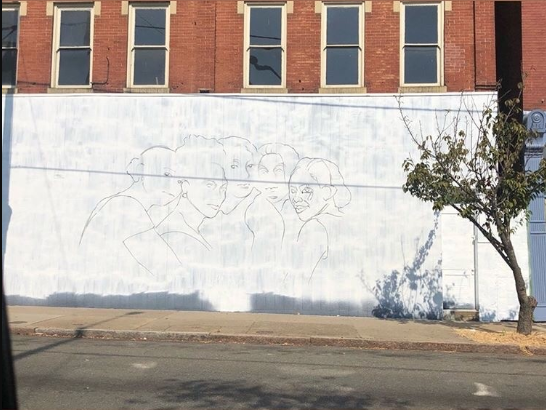 RICHMOND, Va. —  The community was invited to help complete a mural on the Southside inspired by the experiences of women of color in Richmond.

Kristal Lyn Brown moved to Richmond from Long Island a few years ago to go to Virginia Commonwealth University to pursue her PhD in Social and Behavioral Science. At the top of the year, she was selected as a fellow for the Initiative of Change’s Narrative Change Collaborative. Sponsored by The Kellogg Foundation, the Narrative Change Collaborative has empowered people across disciplines with $10,000 grants to “to unearth and innovate counter-narrative(s) to Richmond’s histories of structural racism.”

You’ve likely seen Miles’ work before. She was a featured artist in the Virginia Museum of History and Culture’s Fresh Pain t exhibit a the top of the year and in 2016, she worked with Hamilton Glass to paint a mural on behalf of Girls For a Change at 24 E Broad Street. Volunteers came out and assisted in painting the mural over the course of a few days.

My painting “By Any Means” is inspired by two phenomenal Black women from Virginia, Mary Smith Peake and Barbara Johns. Mary Peake was an educator and free black woman in Hampton Virginia. Recognizing the importance of education, Peake began educating slaves before and during the civil war. After the war, she continued educating free Black individuals. Her school soon became Hampton University. Barbara Johns was a young Black High school student in Farmville Virginia who led walkouts are her school to protest segregated school systems. Her case was one of three cases that was presented during the trial of Brown Vs Board of Education; ruling that separate was NOT equal and to desegregate the schools in United States. These two Strong women recognized that slavery not only existed in a physical form, but also existed as a thought that consumed and trapped one’s mental state. Peake and Johns both sought out education as a tool to break free from physical and mental enslavement; guiding and teaching others to do the same. #auzcan #auzdoes ⚜️💫 #FreshPaint @virginiahistory #auzcan #auzdoes #blackwomen #education #blackgirlmagic #freshpaint #VMHC @virginiahistory #VirginiaHistory #artoberVA #RVAmurals #RichmondisCreative #VisitRichmond #VisitVirginia #LoveVA #gpwmuralpaints @gpwmuralpaints #thenightowl @thenightowl #nicocathcart @nicocathcart #whosham @hamglass #chrismilkhulburt @chrismilkhulburt #ameliablairlangford @ameliablairlangford #auzcan @auz_can #toobzmuir @toobzmuir #noahscalin @noahscalin #edtrask @edtrask #wingchow @wingchow

In early August, she worked with the All City Art Club — another “weaver” in Narrative Change Collaboration — to paint a mural Blue Dot Studios, a new co-working space at 2622 Hull.

“I paint a lot of women in my work,” Miles said. “I use a lot of curly lines and a lot of abstract elements to describe a woman’s internal conversation with herself, as far as self esteem and body positivity, and that internal evolution of loving herself and what that looks like.”

Miles sketched a mural inspired by Brown’s chats with other women about their Richmond experiences.

After getting permission from Max’s Mart on Hull, Miles got to work.

“We’re looking for volunteers to come out and paint the mural. Help be a part of this story,” Brown said.

Volunteers are welcome to help paint the mural this Saturday, Oct. 5 from 8 a.m. to noon. Supplies and snacks will be provided.

“Hopefully the community loves it, because it’s for them,” Miles said. “People have been walking by in awe and I’m like, ‘This is for you. This is for you.'”

The following Saturday, Miles will return to finish the mural with quotes from the Brown Girl Narratives conversations.