NAGS HEAD, N.C. – While storms Humberto and Jerry passed off the shore of North Carolina this past weekend, the storms created massive waves on the Outer Banks, prompted the red flags to fly.

It happened during one of the largest surfing competitions on the east coast, where a Kill Devil Hills-based photographer set out to capture the surfers in action.

“I like to tell a story that could hopefully do some good,” Cyndi Sarfan told WTKR.

Sarfan had positioned herself at the top of Jennette’s Pier in Nags Head where the action was taking place.

“The waves were incredible, enormous, and the sound of the whitewater crashing and the waves were deafening,” she said. 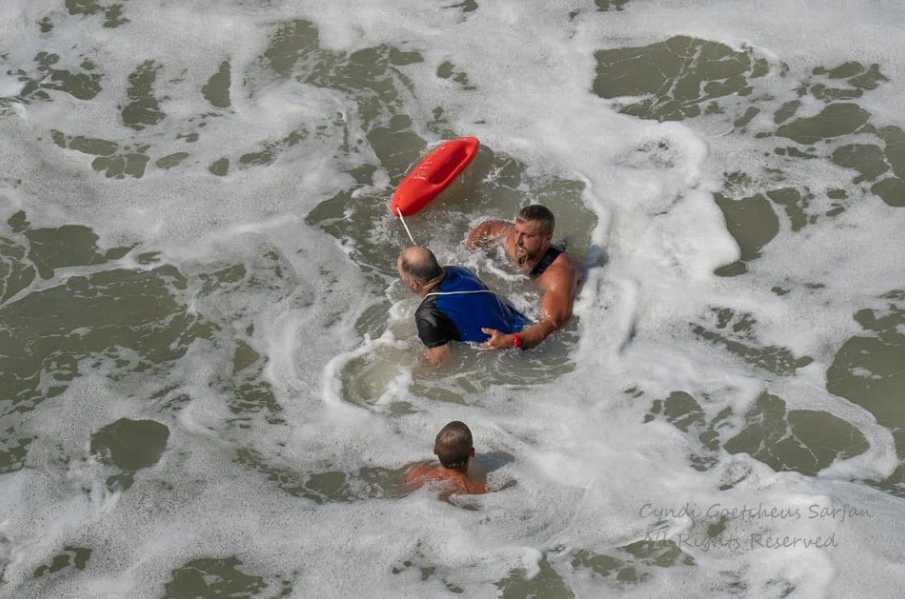 For several minutes she pointed and clicked her way to capturing some incredible thrill rides by dozens of surfers. That’s when the story she set out to tell was about to change.

“I noticed two men down in the water without a surfboard, it took me a minute to realize that it was a rescue in progress,” she explained.

A startling scene, but she focused in from behind the lens.

“I was sure what to do in the moment and it was a compelling scene, I am a storyteller so I was curious to see how the story would play out,” said Sarfan.

A middle-aged man was bobbing up and down in the water, plummeted and pounded by the 10-foot waves. Within five minutes several people helped the man from Maryland to safety. Sarfan said she heard he entered the water during the red flag conditions on a boogie board.

“The next day I went back to the pier and I was taking more pics, then I met a man who told me his son was one of the surfers that rescued the man,” she explained.

That surfer, a 15-year-old from Florida, apparently has rescued distressed swimmers before.

“I’m finding that is is pretty common surfers find themselves in situations here with the rough surf, where they bring a board and help somebody,” she said.

A story that could have had a totally different outcome if it weren’t for a few heroes in the water. A few snapshots that can now educate.

“These images they are terrifying and to share them with the public and have people think twice about going in the ocean when red flags are flying,” she said.

The man who was rescued is expected to be OK.