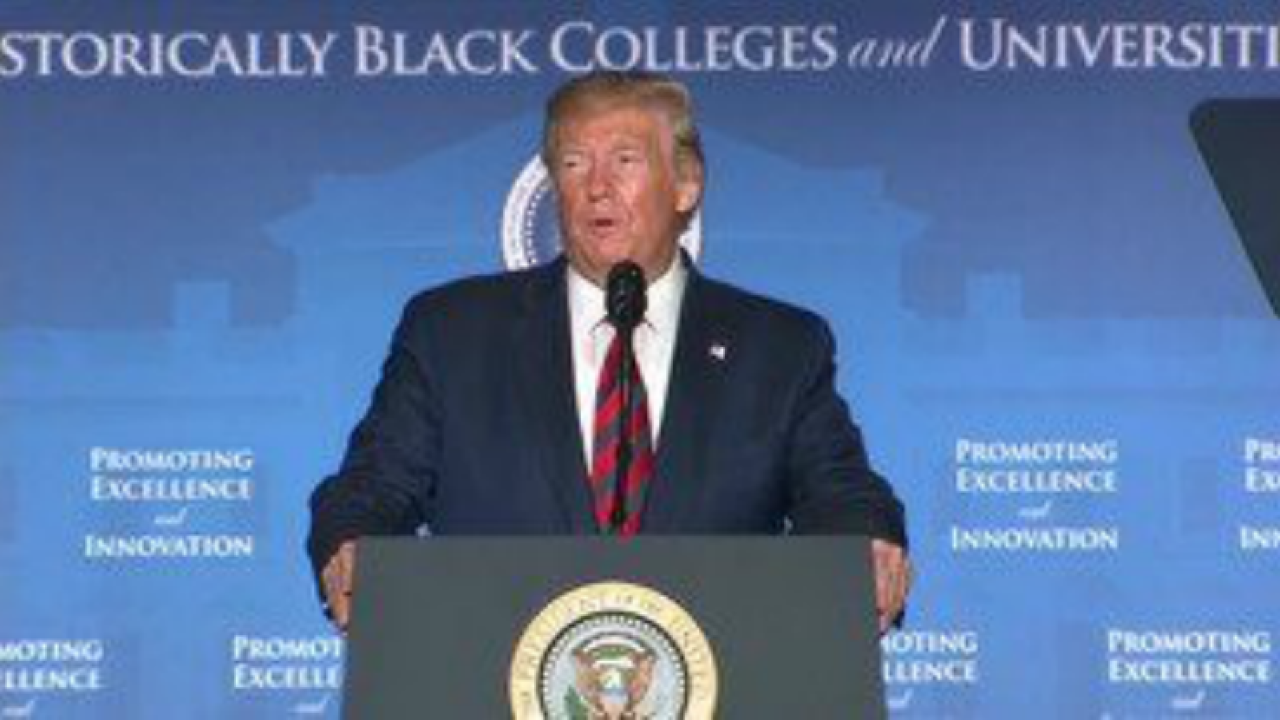 President Donald Trump announced Tuesday that his administration would lift a ban on federal funding for faith-based Historically Black Colleges and Universities, hailing his administration’s work advancing HBCUs during a speech at a conference in Washington.

“This week our Department of Justice has published an opinion declaring such discriminatory restrictions as unconstitutional. It’s a big step,” Trump said at the conference, which included HBCU leaders from around the country. “And from now on faith-based HBCUs will enjoy equal access to federal support.”

Trump said the “nation owes a profound and enduring debt of gratitude to its HBCUs,” later adding, “You’ve seen this administration’s commitment — bigger and better and stronger than any previous administration by far.”

“Things are much different today,” Trump said. “Under this administration, the era of economic surrender is over.”

Trump also cast himself as the best leader for African-Americans, despite securing only 8% of the black vote in 2016 and frequently stoking racial tensions.

“African-Americans built this nation through generations of blood, sweat and tears,” Trump said. “You are entitled to a government that puts your needs, your interests and your families first.”

At one point, Trump questioned why he would have trouble in next year’s presidential contest.

“When I’m on that debate stage, these are pretty good numbers,” he said, citing the unemployment figures as well as African-American poverty rates. “Who’s going to beat these numbers? Please tell me.”

Indeed, the economy was on Trump’s mind as polls out Tuesday showed his approval slipping as recession fears mount.

“They were saying recession. They were hoping for a recession,” Trump said, recalling stories from last month when indicators pointed toward a looming slowdown. Trump said those predictions were wrong, citing stock market performance.

Trump has vowed to ensure funding for HBCUs, but despite efforts to strengthen relations with the institutions during his time in office, his administration’s relationship with HBCU heads has sometimes been frayed.

Trump replaced an existing executive order signed by President Barack Obama aimed at HBCUs in 2017, transferring an HBCU initiative from the Education Department to the White House. HBCUs and Black education groups have applauded the administration’s restoration of year-round Pell Grants, among other efforts. But organizations, including the United Negro College Fund and the Thurgood Marshall College Fund, have pressed the administration to further bolster federal funding for HBCUs, some of which are in dire financial straits.

But more personally, some HBCU leaders have suggested that they haven’t necessarily been heard by the administration.

The White House held a listening session with HBCU leaders in 2017. An attendee, Walter Kimbrough, president of Dillard University in New Orleans, described the session as a meeting with little actual listening going on.

“There was very little listening to HBCU presidents today — we were only given about 2 minutes each, and that was cut to one minute, so only about 7 of maybe 15 or so speakers were given an opportunity today,” Kimbrough wrote.

Around the same time, Education Secretary Betsy DeVos was criticized for calling HBCUs “pioneers when it comes to school choice.” Critics said DeVos’ statement ignored the fact that HBCUs were established in response to Jim Crow laws, which prevented black students from attending public institutions.

Trump has also questioned the basis for federal funding for HBCUs, saying, according to NPR, that “it benefits schools on the basis of race.”