Chef José Andrés hopes to serve at least 10,000 meals to people in the Bahamas 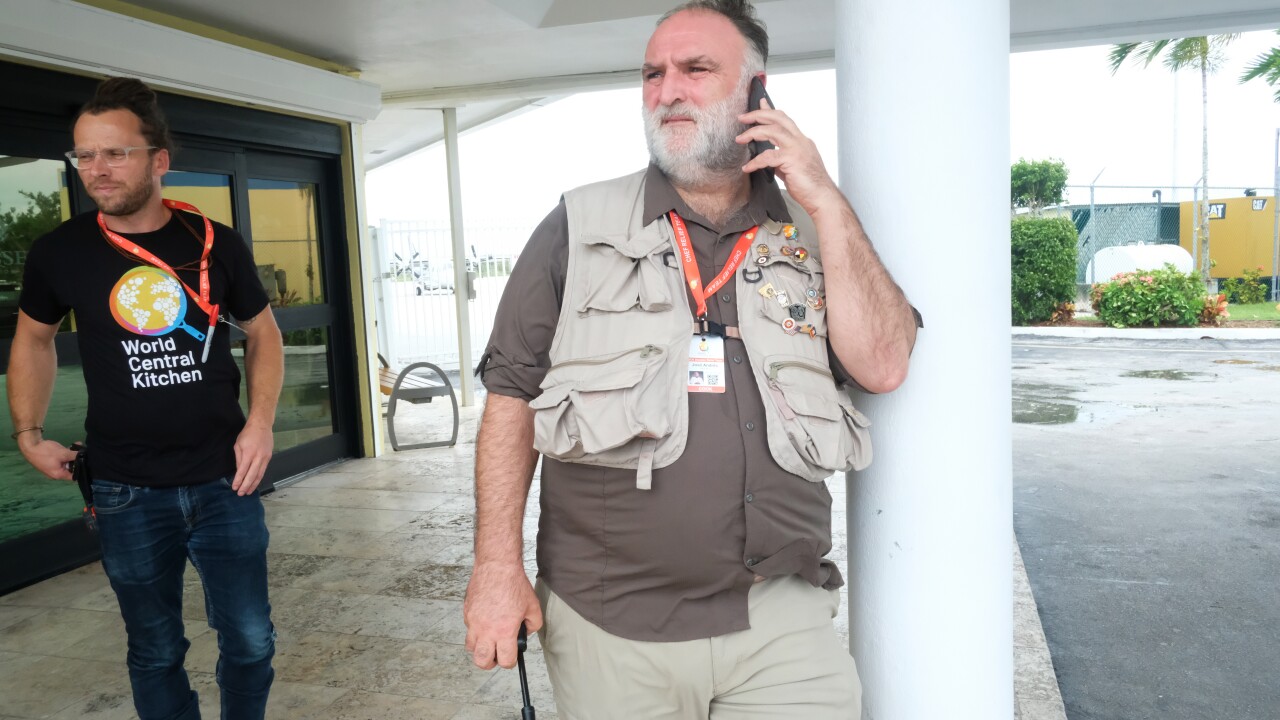 NASSAU, BAHAMAS – SEPTEMBER 03: International chef Jose Andres (C) at the Odyssey Avaiation hangar in Nassau Bahamas as he plans to feed people from Hurricane Dorian devatated Abaco Island on September 3, 2019. The massive, slow-moving hurricane which devastated parts of the Bahamas with 110 mph winds and heavy rains is expected to now head northwest and travel parallel to Florida’s eastern coast, according to the National Weather Service. (Photo by Jose Jimenez/Getty Images)

THE BAHAMAS — Celebrity chef José Andrés — who is famous for his humanitarian feeding efforts in areas stricken by disaster — made his first trip to the Abaco Islands Tuesday with food for those devastated by Dorian.

Andrés told CNN he was able to fly 2,000 sandwiches and more than 1,000 oranges by helicopter to Abaco on Tuesday.

Andrés said he’s planning to transport between 5,000 and 7,000 more sandwiches to the island today.

Andrés tweeted that his organization, World Central Kitchen, is setting up a kitchen on Abaco — “where there is a lot of hungry people” — while his team continues to transfer food from Nassau.

As the U.S. prepares for the arrival of #Dorian, we're seeing the full extent of the destruction left behind in the northern Bahamas. The non-profit @WCKitchen, led by renowned @chefjoseandres, is one of the aid groups spearheading relief efforts.@DavidBegnaud reports. pic.twitter.com/yXiEjWiiWE

The chef told CNN he estimates he’ll be serving 10,000 meals to the people of Abaco. He added that if they “have to go higher” in terms of meals produced “we will.”

A history of feeding people in need

José Andrés and his nonprofit have served millions of free meals to needy Americans after such natural disasters as Hurricane Maria, Hurricane Florence, and the California wildfires.

He even set up shop in Washington, DC, feeding federal government workers who were furloughed or working without pay during the 35-day partial shutdown in January.

Andrés grew up in Spain and found fame as a chef in Washington, where his tapas restaurant, Jaleo, opened in the early 1990s and spawned a mini-empire of eateries across the city and the country.