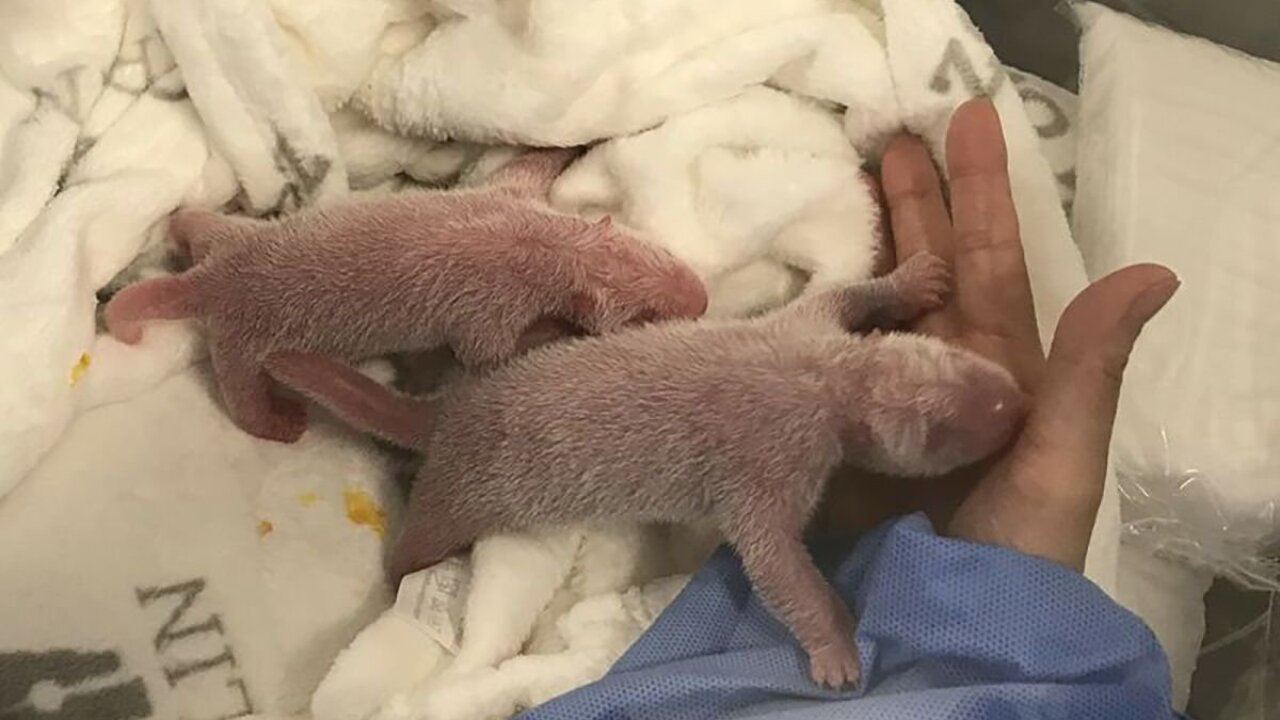 Berlin Zoo welcomed twin giant panda cubs to the world on Saturday, the first time a panda has given birth in Germany.

Berlin Zoo welcomed twin giant panda cubs to the world on Saturday, the first time a panda has given birth in Germany.

Mother Meng Meng gave birth for the first time after a 147-day pregnancy, according to an announcement from the zoo Monday.

Giant pandas are classified as a vulnerable species, making the births significant for conservation efforts.

They are famously hard to breed, and female pandas only have a 24-72 hour window to get pregnant each year.

The new arrivals were born less than an hour apart and don’t look much like their parents yet, with pink skin covered in fine white down and long tails.

In a video published by the zoo on Twitter, Meng Meng can be seen holding one of her babies as it squeaks loudly.

The new mother and her twins dealt well with the birth and are in good health, Andreas Knieriem, zoo director and veterinarian, said in the statement.

“Even though these are the first offspring born to our young female panda, she is already doing a wonderful job as a mum,” said Knieriem.

“In the beginning, the young have to feed roughly every two to three hours and are dependent on the body heat of their mother to keep warm.”

About half of panda births produce twins, but in the wild a mother would let the weaker twin die.

In the 1960s, when the first four panda reserves were established in China, only 30% of infant pandas born at breeding centers survived. These days that figure is 90%, thanks to advances in knowledge and technology.

Breeding experts from China’s Chengdu Research Base of Giant Panda Breeding Zoo have stepped in to help six-year-old Meng Meng look after both cubs.

The pair are taking it in turns to spend two or three hours at a time with Meng Meng, and both cubs are “lively and alert,” according to vets.

“There are only 1,864 adult pandas currently living in their natural habitat,” said Knieriem. “As a result, every single new cub represents an important contribution to the conservation of the species.”

Meng Meng and her cubs will be kept out of view of visitors until further notice, the zoo said.

However, panda fathers do not raise their children, so Meng Meng’s partner, nine-year-old Jiao Qing, will remain in the Panda Garden.

The twins, whose sex has not yet been determined, haven’t been named.

“What fantastic news!” Müller said in a statement.

“Soon, Berliners will be flocking to admire the city’s new black-and-white twins — something that is only possible thanks to the impressive professionalism and remarkable passion of so many people.”

Although Meng Meng and Jiao Qing did reportedly have close contact during her fertilization period, scientists at the zoo also carried out artificial insemination to increase the likelihood of pregnancy, according to a press release.

The cubs will spend up to four years in Berlin before leaving for China, where they will join the panda protection program.