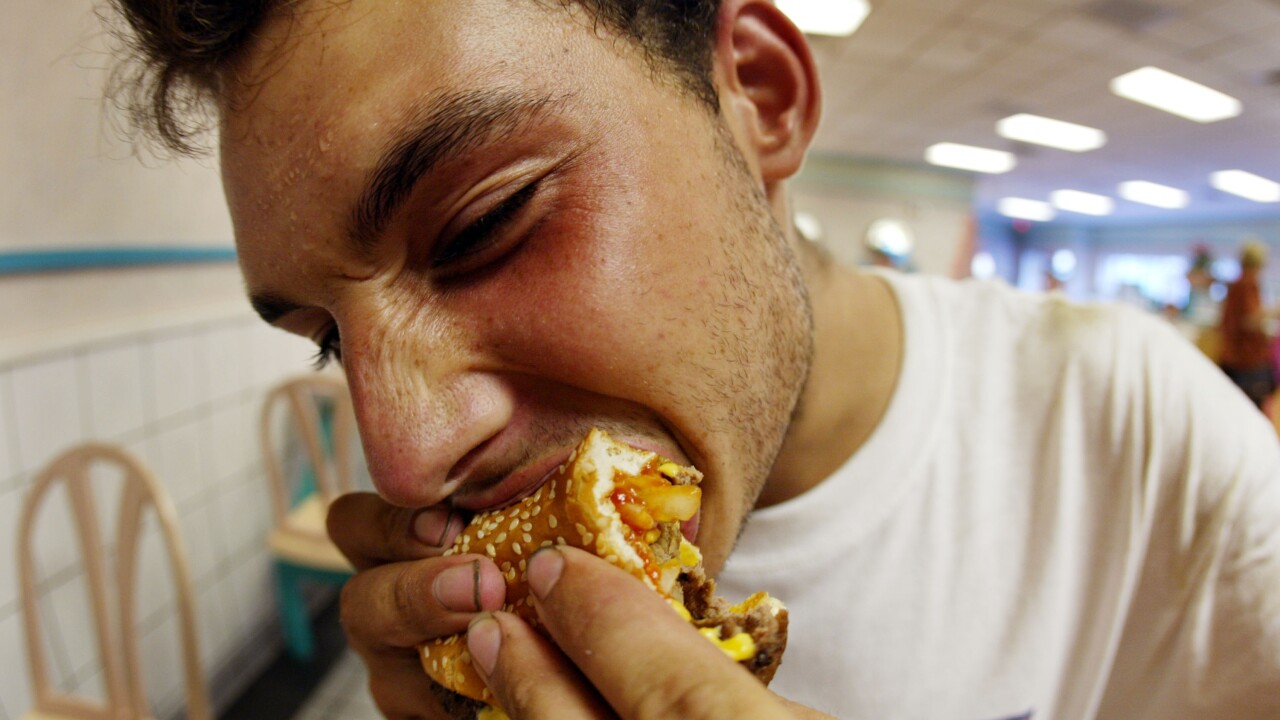 MIAMI BEACH, FL – JULY 18: Jeff Baughman bites into his double cheeseburger with a Super Fries and a Super Coke on July 18, 2002 at a McDonalds in Miami Beach, Florida. The health effects of an American diet of super-sized fast foods are becoming apparent as increasing numbers of children and adults are being treated for obesity. Studies seem to point to the fact that many overweight children and adults get a large portion of their calories by consuming too many sodas and sweetened juices and beverages. Sweetened drinks + “super-sized” meals + the convenience of fast food + a decrease in physical activity = a recipe for obesity. (Photo by Joe Raedle/Getty Images)

Preteens are known for their defiant attitudes and dramatic mood swings, but over the last decade a much more disturbing characteristic has been increasing: depression.

A new study finds that one culprit may be a high fast-food, low plant–based diet. When researchers at the University of Alabama at Birmingham analyzed urine from a group of middle schoolers, they found high levels of sodium and low levels of potassium.

Low potassium, Mrug added, is an indication of a diet that lacks healthy fruits and vegetables that are rich in potassium, such as beans, sweet potatoes, spinach, tomatoes, bananas, oranges, avocados, yogurt and even salmon.

The study also found that higher urine levels of sodium, and potassium at baseline, predicted more signs of depression a year and a half later, even after adjusting for variables such as blood pressure, weight, age and sex.

“The study findings make sense, as potassium-rich foods are healthy foods,” said dietitian Lisa Drayer, a CNN health and nutrition contributor. “So, if adolescents include more potassium-rich foods in their diet, they will likely have more energy and feel better overall — which can lead to a better sense of well-being and improved mental health.”

Depression among middle schoolers is on the rise. An analysis of national data found the rate of major depressive episodes among kids 12 to 17 within the last year had increased by a whopping 52% between 2005 and 2017. The rate of depression, psychological distress and suicidal thoughts over the last year among older teens and young adults was even higher: 63%.

Many factors could be contributing to the deadly trend among teens, including a chronic lack of sleep, an overuse of social media, even a fear of climate change.

Prior studies have similarly found a link between fast food, processed baked goods and depression in adults. One study in Spain followed almost 9,000 people over six years and found a 48% higher risk of depression in those who ate more highly processed foods.

A meta-analysis of research from the United States, Spain, France, Australia, Greece and Iran also found a “robust association” between diet and depression. Their results showed people who avoided a highly processed diet and instead followed a Mediterranean diet — fresh fruits, vegetables, nuts, seeds and little red meat or processed foods — had reduced risk of depression.

The new study was small — only 84 middle school girls and boys, 95% African-American from low-income homes. But the methods were solid: They captured overnight urine samples to objectively test for high sodium and low potassium at baseline and again a year and a half later. Symptoms of depression were gathered on both occasions during interviews with the children and their parents.

But the study could only find an association between sodium and depression, not a cause and effect, and much more research needs to be done, Mrug said.

“It might also be true that a poor diet could be linked to other risk factors for depression, such as social isolation, lack of support, lack of resources and access to healthcare and substance abuse,” Drayer said.

“It might be hard to tease out if diet is the factor or simply a marker for other risk factors for depression.”