‘When in doubt, stay out,’ warns expert after toxic algae kills dogs 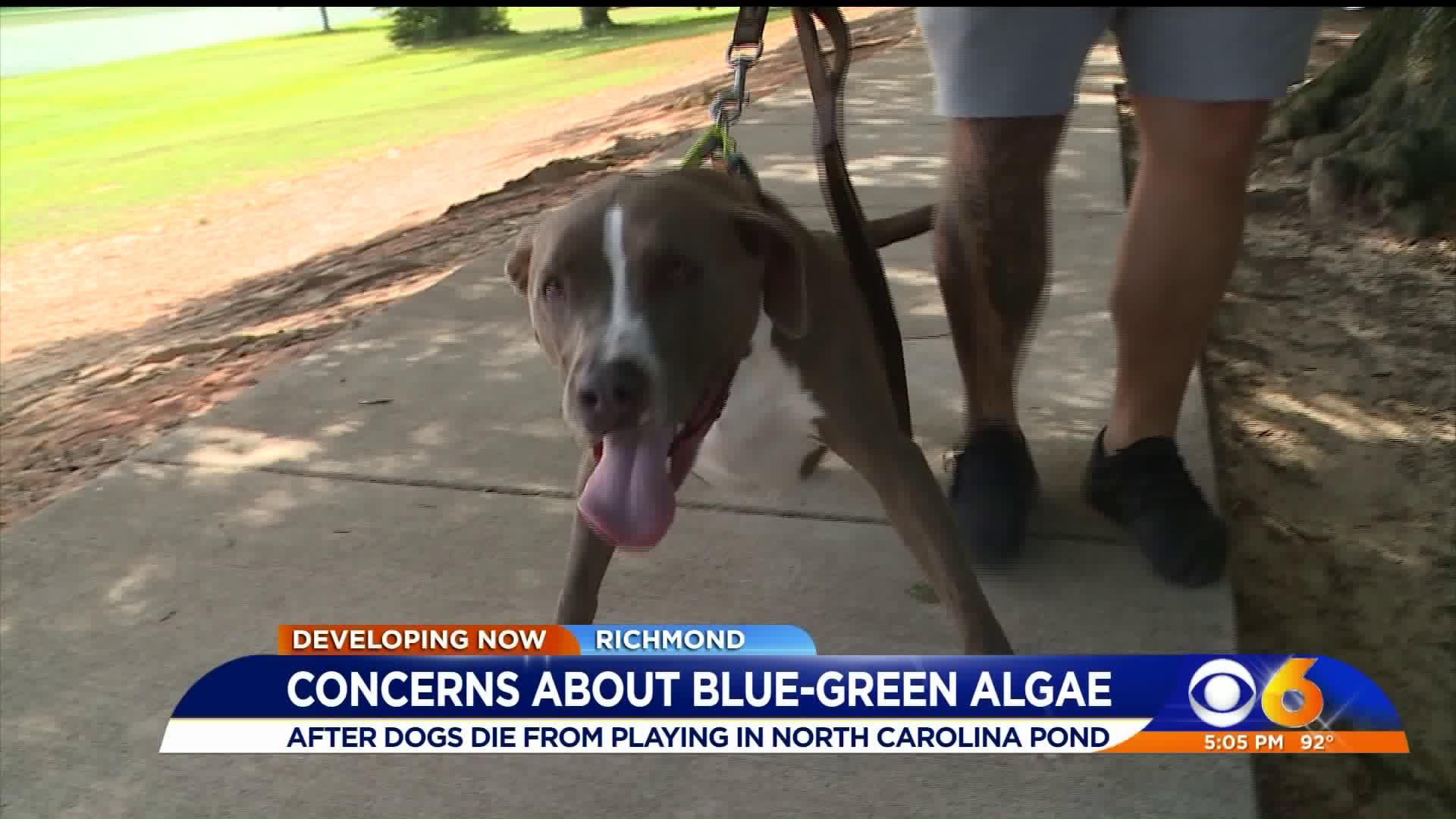 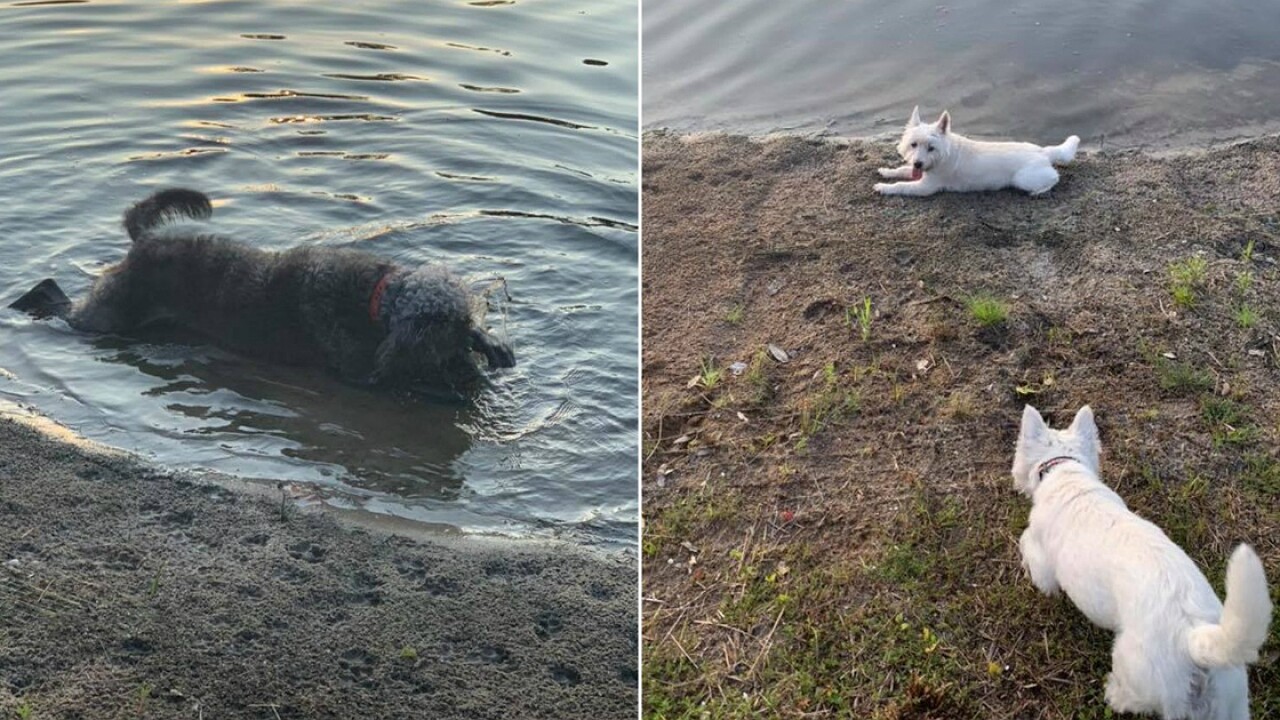 RICHMOND, Va. -- Experts who have studied the harmful impacts of contaminated waters warn dog owners in Central Virginia that "when in doubt, stay out."

The fears come after three dogs died after frolicking in a pond in Wilmington, North Carolina, while another succumbed after a swim in Lake Allatoona, Georgia.

A common enemy likely led to the deaths of all four dogs: liver failure brought on by ingesting water contaminated with toxic blue-green algae.

Margaret Smigo serves as the Waterborne Hazards Program Coordinator for the Virginia Department of Health.

She also serves as the Virginia Harmful Algae Bloom Task Force Coordinator. The task force is made up of several agencies that work together to respond to algae bloom events, also known as cyanobacteria or blue-green algae.

A doggy play date in a North Carolina pond turned tragic after three pups died from toxic algae. Now, their owners say they hope their loss will educate fellow dog lovers about the dangerous blooms.

"If it says not to swim for humans, it’s not safe for your pets to swim either," Smigo warned.

Currently, the Virginia Department of Health says the closest cases of harmful bacteria to Richmond metro is at Lake Anna in Spotsylvania, Louisa, and Orange Counties.

Advisories also exist at Mint Springs in Albemarle County, according to Smigo.

So far, no dog deaths nor illnesses have been linked to the harmful algae in Virginia.

But, that doesn't calm the concerns from dog owners like Lloyd Cope. He doesn't allow his dog, Odin, to splash in or drink the water at Richmond's Byrd Park.

"I'm just one of the kind of guys that gives them clean water and that’s about it, because I worry about them. I would never really let them drink out of this," Cope said.

He recalls a devastating time when a friend's dog died after being exposed to harmful bacteria several years ago.

"A friend of ours two years ago had her dog out on the Huguenot Flat Water area who was drinking water all day long while playing in the river," Cope remembered. "They came home shortly after went into some sort of respiratory arrest and liver failure. Within 48 hours her dog passed away and they said it was acute liver failure due to toxins ingestion likely some sort of algae toxin."

There are no confirmed reports of the harmful algae in the Richmond metro area.

Smigo said the Virginia Department of Health often relies on the public to be notified of contaminated water.

"It’s always best to avoid water that’s discolored, it has a foul-smelling odor, perhaps it has gnats or scums on the surface," she explained.

Citizens can support of possible harmful waters to the state at their website SwimHealthVA.com.

A doggy play date in a North Carolina pond turned tragic after three pups died from toxic algae. Now, their owners say they hope their loss will educate fellow dog lovers about the dangerous blooms.

What is toxic algae?

Algae occurs naturally in water, but the blue-green variety are considered Harmful Algal Blooms (HABs). Blue-green algae, also known as cyanobacteria, are “primitive,” photosynthetic organisms that can feed off the sun to make their own energy and release oxygen and possibly toxins in the process, said David G. Schmale III, a professor at Virginia Tech.

Some species produce potent toxins that can sicken or even kill people, pets and wildlife, according to the US Environmental Protection Agency. Blue-green algae and other HABs can produce different types of poisons, some that affect the liver, others the brain.

Schmale said he hasn’t seen a coroner’s report to verify the causes of death, still he speculates the dogs were thirsty and the water contaminated. “Samples of the water where the dogs were likely exposed will need to be tested” for toxins and bacteria to verify this, though, he said.

Where do these algae grow?

Harmful algae can bloom in both fresh and marine water. They’ve been observed in large freshwater lakes, smaller inland lakes, rivers, reservoirs and marine coastal areas and estuaries in all 50 states, according to Schmale.

Toxic algae can look like foam, scum, or mats on the surface of water, said Schmale. Harmful algae blooms, which can be blue, vibrant green, brown or red, are sometimes mistaken for paint floating on the water.

Toxic algae often stink, sometimes producing a downright nauseating smell, yet animals may be attracted to the smell and taste of them, according to the EPA.

How do I know if my dog has been exposed?

Symptoms, which usually arise anywhere from 15 minutes to several days after exposure, include diarrhea or vomiting, weakness or staggering, drooling, difficulty breathing and convulsions or seizures, the EPA reports.

Immediately, take your pet to the vet if you see these symptoms.

Dogs, more than other pets, are especially vulnerable because of their tendency to play in water and so sometimes they drink the toxic algae, other times they lick it off their fur. Even dogs that avoid the water may be in danger. Many dogs like to scavenge the shore where they may find — and eat — drying clumps of algae.

One study identified 368 cases of toxic algae poisoning associated with dogs throughout the US over a nine-decade period, but the researchers believe this represents only “a small fraction of cases that occur throughout the US each year.”

How do I keep my dog safe?

If you spot the algae, leave the area and don’t let your dog drink or swim in the water. If your dog has already gotten into a harmful bloom, rinse your pet off immediately in fresh, clean water. Remember to wear gloves to protect yourself. And, if you know you’ve been in contact with the bloom, immediately wash with soap and water.

Can I be harmed by the algae?

When high concentrations of these cyanotoxins are consumed, they can poison not only domestic animals but also humans, said Schmale. Contact with toxic algae can cause rashes, stomach cramps, nausea, diarrhea, and vomiting.

Not only are these poisons present in water, but they can also accumulate along the food chain. “Ultimately, the entire food web is impacted because these toxins are produced,” said Schmale. As a result, food contaminated with HABs have caused a variety of illnesses, and, in the most severe cases, lead to paralysis and respiratory failure, according to the US Centers for Disease Control and Prevention.

Eating contaminated shellfish can cause symptoms within 15 minutes or up to 10 hours after finishing a meal. While mostly symptoms are mild, they can include tingling or numbness in the face, arms, and legs, headache, dizziness, loss of coordination and in rare cases, paralysis and respiratory failure.

The CNN Wire contributed to this article.