Shaken by the El Paso shooting, Latinos across the US fear they’ll be targeted next 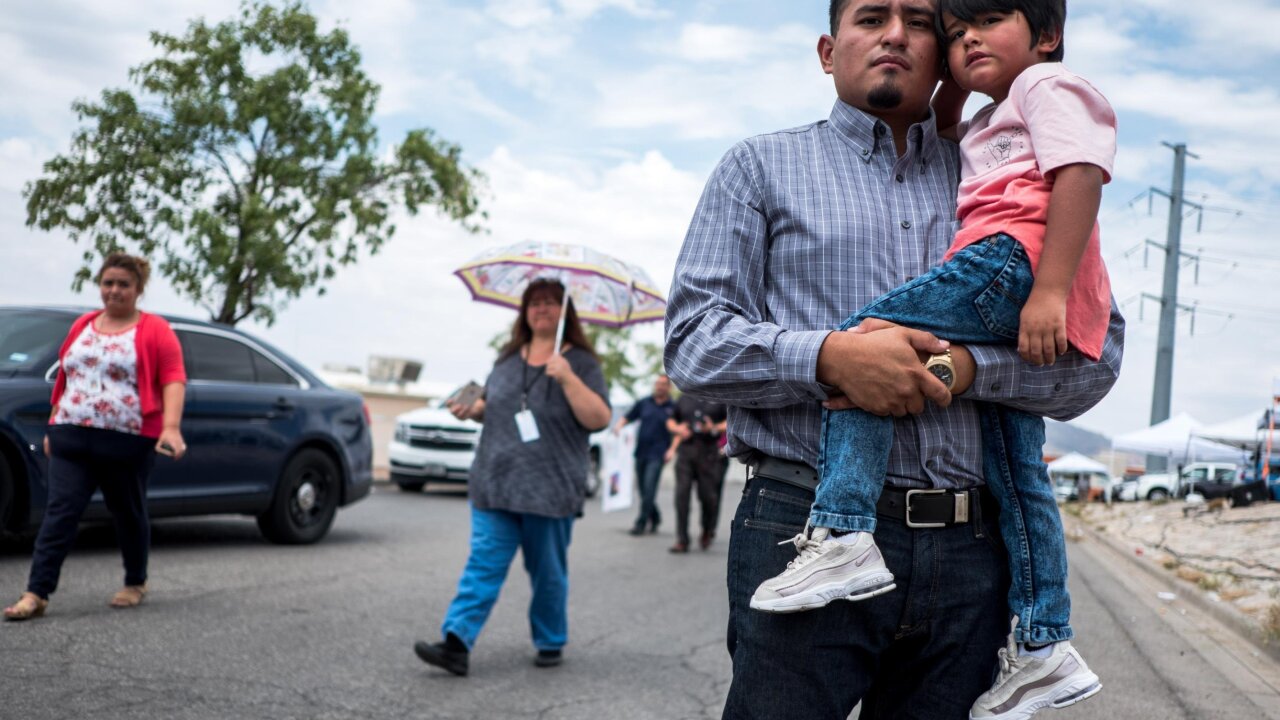 Ivan Flores and his son Derek, 4, pose Tuesday near the site of the Walmart shooting in El Paso.

Miles beyond the Walmart’s walls and days after the gunman pulled the trigger, the massacre that ended 22 lives here has jolted communities that were already on edge.

For Latinos and immigrants across the United States — many already living in fear — the shooting was a devastating escalation. This time, it wasn’t a viral video of someone shouting at people for speaking Spanish or a racist tweet telling congresswomen to “go back” to where they came from.

It was something far more terrifying: an ambush, carried out by a gunman who made no secret of his hatred of Latinos.

“We’re all feeling it. We’re all shaken about it,” said Vicki Gaubeca, who lives in Tucson, Arizona, and is the executive director of the Southern Border Communities Coalition. “Rhetoric is enabling racists and white supremacists and people who hate the other. It has emboldened them to act out in ways that are extraordinarily violent and hurtful to our communities.”

On the streets of El Paso and across the United States, many people who’ve spoken with CNN this week said they were shocked but not surprised to learn the gunman had railed against Latinos and immigrants in a racist screed that includes some phrases President Trump has uttered in the past.

In a national address days after the shooting, Trump called on the nation to condemn racism and white supremacy. But he stopped short of acknowledging his own divisive and racist rhetoric.

“He said the right words, but his heart clearly was not into it. He didn’t deviate one word from what was on the teleprompter,” said Jorge Chepote, a 49-year-old business executive in St. Louis. “You judge people by their actions. Until now, his actions have only contributed to this.”

It’s important to remember, Maria Asuncion Bilbao said, that just months ago at a Florida rally, Trump described what he said was an “invasion” of people crossing the border and laughed when an audience member shouted “shoot them.”

“He’s encouraging this. He’s sowing the seeds of hate here,” said Asuncion Bilbao, a community organizer for United We Dream in Florida.

“This is serious,” she said. “Something like this could happen again.”

A father fears for his kids’ safety

Even before details emerged about the gunman’s manifesto, Chepote knew something he’d dreaded had come to pass.

Just a few weeks ago, he told CNN he feared one day there’d be a shooting that targeted immigrants.

“Now that it has happened, it becomes more real,” he said on Tuesday. “It’s not that we’re going to change the way we live our lives, because that would be giving into the fear, but certainly it’s something that we need to be more careful about.”

Chepote, a naturalized US citizen, said he’s afraid for his children’s safety — but even more afraid about the direction his country is heading. He hopes to see more security measures now at events in the Latino community and, more importantly, hopes the shooting will be a wake-up call.

“I just hope we don’t forget about it,” he said. “If people see that nothing happens, it (violence) will continue to happen. … Sometimes you are in the middle of history and you don’t realize, this is big. And we cannot let it become normal. And it’s becoming normal. That’s for me the main worry.”

In Wisconsin, Christine Neumann-Ortiz said the El Paso shooting immediately made her think of what she’s seen unfolding in her own community — from hate crimes targeting immigrants to teachers from immigrant backgrounds facing bullying at schools.

“There’s no question that people recognize that they’re being targeted, that a lot of protections they had in the past have been ripped away,” said Neumann-Ortiz, , executive director of Voces de la Frontera, an immigrant advocacy organization. “There is more fear.”

But that, she said, also is galvanizing more people to organize and fight for their rights.

“The Trump candidacy and presidency … has really escalated the attacks broadly on everybody at once. And it’s brought people together, without a doubt, and it’s woken up people who had not been active into activism,” she said. “I think the more rights we’ve lost … the more clear things are.”

People in El Paso are watching their backs

In El Paso, a city where more than 80% of the population is Latino, the devastation the shooting left behind is palpable days later. Even people who don’t know the victims told CNN they’re struggling to move forward after the attack.

“I always felt safe. And this was always somewhere where I could always feel confident that it would not happen here,” 26-year-old Adriano Perez told CNN Monday evening at a vigil for the victims. “To find out that this was an act of domestic terrorism rooted in white supremacy … was I think the real turning moment, where it was worse.

“Because now, he came here intentionally for the very same reasons that I love this city. … He came here to attack our beautiful immigrant community where we care for one another, where we look out for each other.”

Carmela Morales, 59, said she has been avoiding grocery shopping since the shooting. But on Tuesday her need for bottled water, ham and eggs forced her to head to another Walmart in the city.

She panicked in the parking lot when she saw a blonde man who seemed to be looking at license plates. She feared he could be another attacker, putting Latinos in his crosshairs.

“Now they are out, hunting us,” she thought to herself, eying the man warily as she walked into the store.

The man turned out to be just another shopper, but still she rushed to gather up her groceries. Morales noticed some back-to-school deals but didn’t even linger at the sale racks.

“I just didn’t feel safe,” she says. “I got my eggs, I got my water and I just wanted to get out of there.”

It’s a new normal, Morales said, that she doesn’t expect to improve.

“The saddest thing is not what’s happening now. It’s what is going to happen to the children of our children,” she said. “This will only get worse for our country and even more for our people.”

“The people that were targeted were people that look just like me,” said Ivan Flores, 27, an insurances broker in El Paso. “I have a six-month old [child] at home…I don’t know what my family would be going through if they lost me and his mom just like three kids lost their parents here.”

Another resident, Claudia Portillo, knows how fear can take over your life. She fled Ciudad Juarez more than two decades ago after her husband was killed to start a new life with her children across the border. She says El Paso embraced her family.

But now, the city that sheltered them feels different. They’re more hesitant to go out, and they’re searching for ways to protect themselves.

“I’m reliving those memories of living in Juarez back in the ’90s. You are looking behind your back all the time,” said Portillo, 52. “My children are grown adults, 29 and 27. They had to bury their dad 23 years ago and now — oh my goodness — it’s here. I don’t want it to be here.”