In a news conference in City Hall Thursday, Stoney promised the project would bring nearly 22,000 jobs -- including construction jobs -- to the city. He estimated it would take about five years for completion.

The Navy Hill plan centers on 10 blocks from 5th to 10th streets and from Marshall to Leigh streets, according to a media release.

The mayor's proposal would bring a new hotel, a GRTC bus transit center, apartments with affordable housing and a state-of-the-art arena.

"It’s time to give our city and its residents a venue they deserve and the economic opportunities that come with it," Stoney said.

A 525-room Hyatt Regency hotel was also included in the plans that would help target tourists that Stoney stated often stay in neighboring counties. Richmond has lost 31,000 lodging nights to other cities because of lack of hotel rooms, according to the mayor. 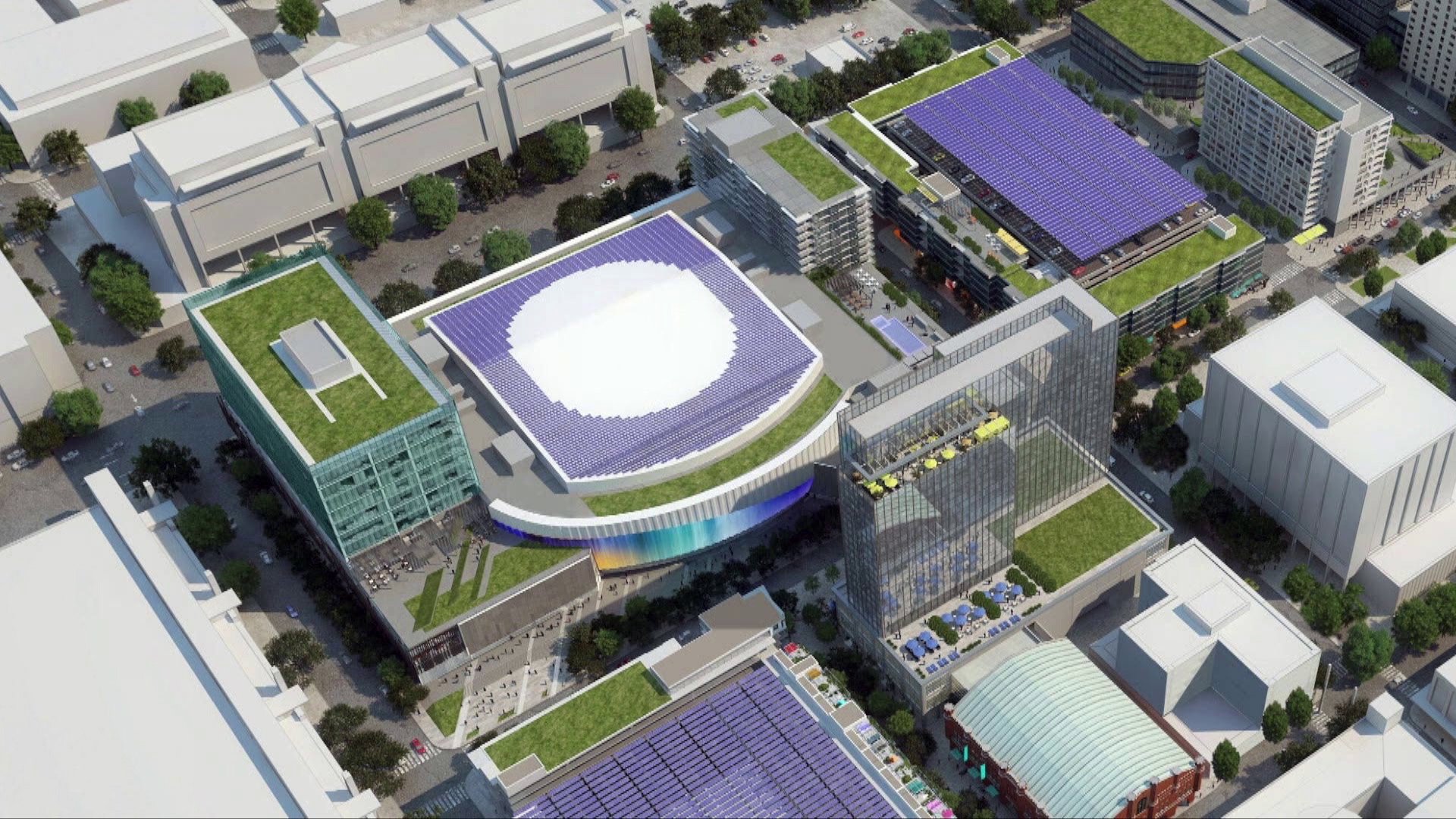 He also touted approximately $300 million that will be allocated for women and minority business owners to develop in the new neighborhood. Stoney said approximately 60 percent of the current land in the Navy Hill boundaries do not generate tax revenues for the city.

The proposal is expected to generate $1 billion in incremental tax revenue over the course of 30 years, which Stoney stated 50 percent of will go to support Richmond Public Schools.

Over the past 17 months, the city administration has worked with The NH District Corporation to negotiate the plans and the developer Capital City Partners.

Stoney promised taxes will not be raised to fund the project and construction costs will be paid for by private investors.

"It is always been my commitment to the city that the taxpayers of Richmond will not be on the hook under any circumstances," Stoney explained.

A media release read that "there is no 'moral obligation' or 'general obligation' bonding by the city, meaning Richmond taxpayers will never be responsible for Navy Hill's development costs -- only private investors."

Private investment will fund the project, including housing, the hotel, transit center, restoration of the Blues Armory, office space, and retail space, according to officials.

"This is a continuation of him taking more of your money and spending it on projects that the public doesn’t want," Goldman said. "I had to sue to get see the basic documents."

In May, a Richmond judge ordered the city to hand Goldman a portion of the arena proposal after he sued Stoney's administration.

Goldman was skeptical of Stoney's promise that Richmond taxpayers would not be responsible for the project if it failed.

Councilman Mike Jones attended the news conference and said he was eager to read the fine details of the plan.

"Now is our time as a council to really sit down and go through this with a fine-tooth comb," Jones stated.

"The Richmond City Council looks forward to the receipt, review, and execution of the full vetting and due diligence that such a proposed transformative project necessitates and Richmonders deserve”, says Council President Cynthia I. Newbille.

A special meeting was scheduled on Monday for Stoney to present necessary ordinances to City Council and move his project forward. Council members will vote on the proposal after a public hearing is scheduled.

The plan, subject to the approval of Richmond City Council, will be submitted in the form of ordinances and supporting legal documents introduced at a special meeting of the council to be held on Monday, August 5.

“The ordinances we will deliver to the city council on Monday propose a responsible and inclusive opportunity to grow our economy by creating a thriving city center and community,” said Mayor Stoney.

“The agreement we have negotiated ensures that the Navy Hill development project will create thousands of jobs, hundreds of affordable housing units, job-training opportunities, new revenue, and world-class amenities for ALL Richmonders,” the mayor added.

The $1.5 billion project is expected to generate $500 million in annual wages in the region, in addition to an estimated $1 billion in surplus revenue to the city over 30 years for priorities such as education, housing, streets and the arts.

Highlights of the negotiated proposal include:

“The overarching goal for this proposal is to significantly improve the quality of life for all Richmond residents.”

Under the proposed agreement, the Department of Social Services will stay in its current location until a future home can be found downtown. If another home cannot be found for DSS, the city will be under no obligation to move from its existing facility at Marshall Plaza.

Thursday’s announcement follows 17 months of intensive negotiations between the city and Richmond-based community leaders of the nonprofit NH Foundation on behalf of NHDC, working with the developer, Capital City Partners (CCP).

As negotiated, the agreement accomplishes the city’s goals without utilizing debt capacity, and without taking any existing tax money away from our schools or services. It does so without raising taxes, and without any subsidies or handouts for the developers of this project.

“During this time, we worked hard to memorialize in legal documents unprecedented protections for the city to ensure this project will be a safe and responsible investment for Richmond without leaving the City or taxpayers on the hook,” said Chief Administrative Officer Selena Cuffee-Glenn, the lead negotiator of the city’s team. “As the mayor has said, we’ve dotted the “i’s” and crossed the “t’s,” and the language in the ordinances will make sure that what we have agreed will happen, does happen.”

The public process now begins in earnest.  Leaders of NHDC and CCP have committed to a series of public outreach and engagement opportunities with city residents in the coming weeks in addition to participating in the legislative process with city council and the Navy Hill Development Advisory Commission it formed to evaluate the proposal over the next 90 days.

“NH District Corporation’s goal is to help create a diverse downtown neighborhood that welcomes everyone,” said Dr. Monroe Harris, NH Foundation Board member. “Lots of people have worked hard to shape this plan, and we are excited to share the full detail of the project next week.

“We look forward to hearing the community’s feedback and to working with neighborhoods, Richmond residents, and the city council to shape the downtown we all deserve for the city we love.”

NHDC has also set up a website to share information and answer questions about the project, which can be accessed here.

Upon formal introduction of the ordinances on Monday, the original proposal submitted by NHDC, the request for clarifications document and the ordinances themselves will all be posted on the city’s website and accessible to everyone. The city’s original Request for Proposal and previously released public documents on the project can also be found here.

“Now is the time for the public to see for themselves how this will benefit all Richmonders, and for the members of City Council to begin their review,” said Mayor Stoney.

“I fully support City Council taking the time it needs to review this project, and I also encourage the public to engage and ask questions of the developer, which is ready and excited to share the details of this project. Everyone will have the chance to kick the tires, as we have.”

News of the project moving forward was welcomed by local elected and area leaders.

Sheryl Adams, Interim CEO of GRTC, said the development and the new GRTC Transit Center it will build will enhance the customer service experience for the city’s mass transit riders.

“We look forward to a permanent transit facility Downtown for our customers and employees to provide safe, sheltered and convenient connections between buses,” she said.

“This project is an opportunity for our city to take another very big step in the right direction of inclusivity, equity and opportunity -- one I believe can have a positive and transformative impact on Richmonders today, tomorrow and for years to come,” said Mayor Stoney.