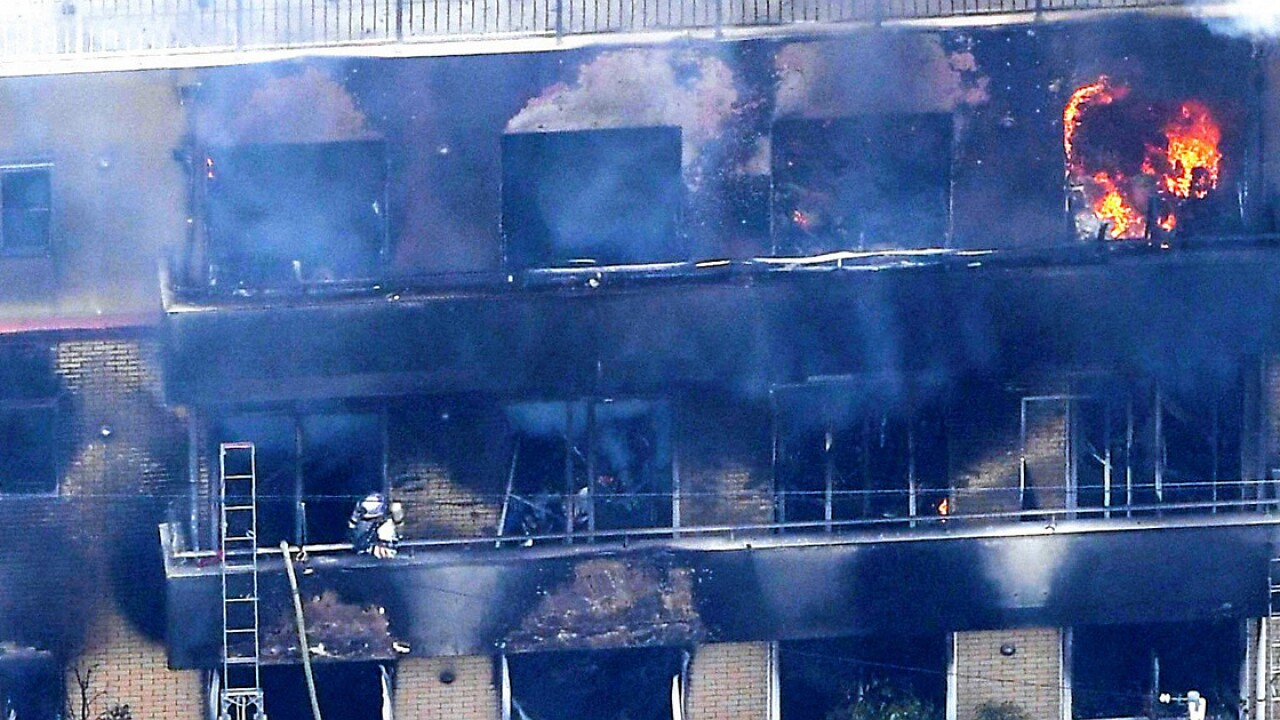 The fire started at about 10:30 a.m. local time on Thursday. (Asahi Shimbun via Getty Images)

At least 33 people have died and 35 injured in a suspected arson attack at a renowned animation studio in the Japanese city of Kyoto on Thursday, according to police.

Police said the victims of the Kyoto Animation Co. building fire included 12 men, 20 women and another individual whose gender was unknown.

A Kyoto prefectural police spokesperson said a 41-year-old man suspected of carrying out the attack also had a backpack containing several knives. The suspect poured what appeared to be gasoline around the studio and set it on fire.

According to a witness that spoke with the police, the suspect shouted “Die!” when spilling the liquid at the building’s ground floor.

The suspect is currently in hospital with serious burn injuries and police do not expect to be able to question him on Thursday.

The fire broke out at about 10:30 a.m. local time on Thursday (9:30 p.m. ET) in the company’s 1st Studio building in Kyoto’s Fushimi-ku district. Police said a resident reported hearing a sound like an explosion coming from the studio.

About 48 fire engines have been dispatched to the area and are currently trying to get the fire under control.

Footage from the scene shows thick smoke billowing out of the four-story building, which is located in a residential area several kilometers south of Kyoto Station, as firefighters worked to douse the flames.

Japanese Prime Minister Shinzo Abe tweeted that he was left speechless at the “gruesomeness of the crime,” and offered condolences to victims.

Founded in 1981, Kyoto Animation — known as KyoAni — produces animations and publishes anime novels, comics and books, according to its website. Among Japan’s most well known studios, its most famous works include “Free!”, manga series “K-On!”, the anime TV adaptation of “Haruhi Suzumiya” and “Violet Evergarden” which Netflix picked up in 2018.

The company’s philosophy as posted on its website includes keeping a “humanitarian” corporate culture and believes that “promoting the growth of people is equal to creating the brightness of works.”

There was an outpouring of grief on Twitter Thursday with fans of the studio offering their condolences.