Trump at ‘Salute to America’ July 4th event: Americans ‘part of one of the greatest stories ever told’ 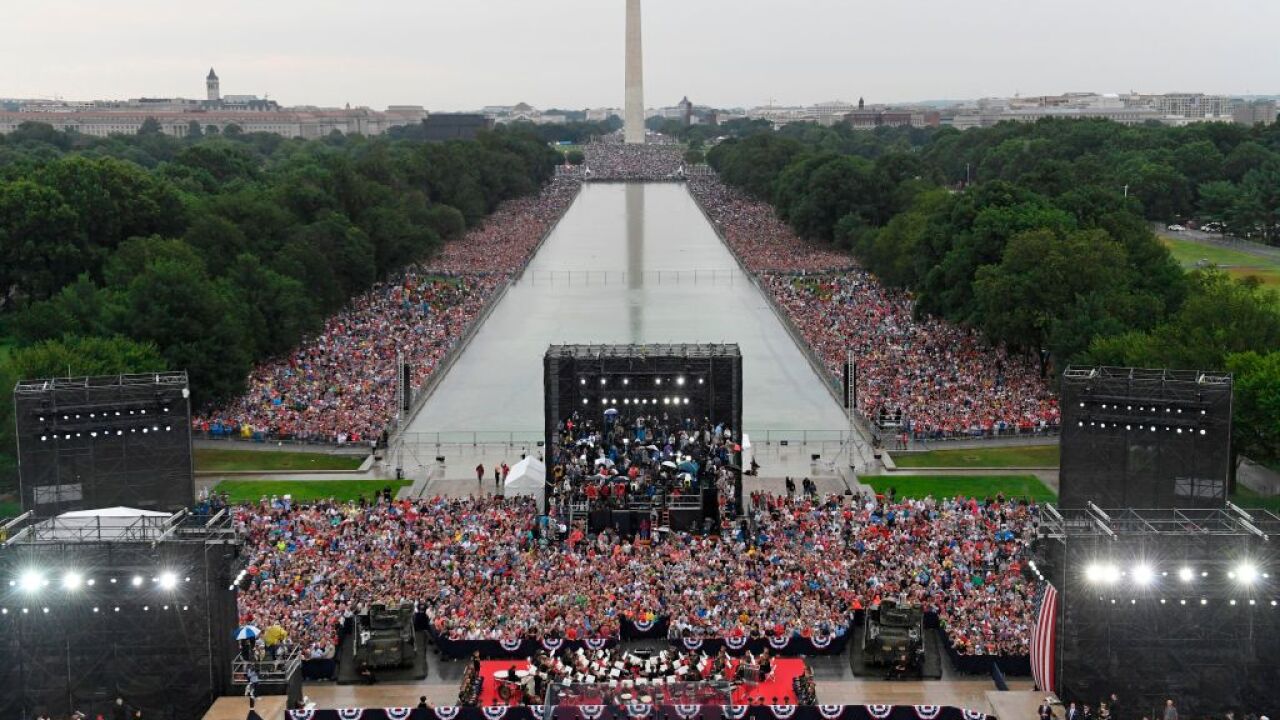 Neither heavy rain nor a raft of criticism prevented President Donald Trump from delivering his “Salute to America” to a poncho-clad crowd on the National Mall on Thursday.

“Together we are part of one of the greatest stories ever told, the story of America. It is the epic tale of a great nation whose people have risked everything for what they know is right and what they know is true. It is the chronicle of brave citizens who never give up on the dream of a better and brighter future,” Trump said from behind rain streaked bullet-proof glass after a flyover from the plane that normally serves as Air Force One.

In his remarks, Trump told Americans “we are part of one of the greatest stories ever told.”

“Today, just as it did 243 years ago, the future of American Freedom rests on the shoulders of men and women willing to defend it,” Trump said.

It was a speech heavy on history and plaudits for the military, which helped plan and execute the spectacle that Trump organized.

Severe weather and low cloud cover hung over the Washington area for much of the afternoon beforehand, leading to questions of whether the event would be canceled or curtailed.

At one point, loudspeakers at Trump’s event at the Lincoln Memorial in Washington said the program that was supposed to start at 6:30 p.m. ET “has been delayed,” but the White House later said the event would mostly start on time.

Trump’s plans were a sharp change from how the holiday has been marked in the nation’s capital by previous presidents from either party.

“It will be the show of a lifetime!” Trump declared optimistically a day before.

The spectacle was likely to delight many Americans who view the military as one remaining unifying force for pride in a country divided along political, racial and economic lines. But it’s also drawn skepticism and criticism for its costs and political hue. 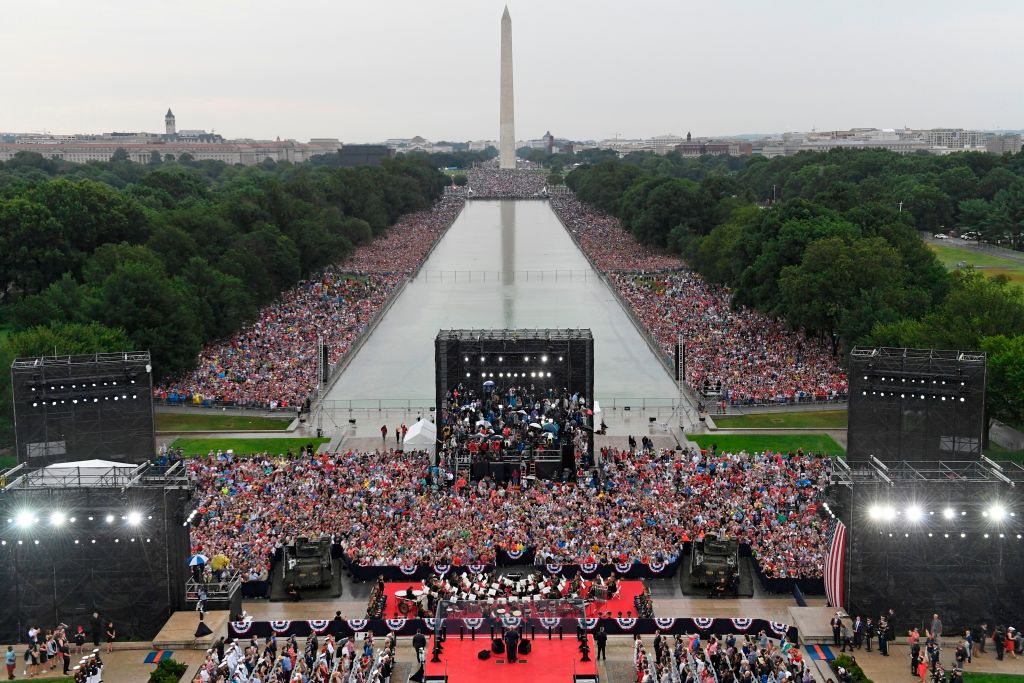 The Pentagon was wary of it, however, and the city of Washington openly opposed it. And even some White House officials wondered whether a speech meant to be apolitical would stay that way — and whether crowds would materialize to watch it.

Bands heralded the branches of the military with their official march songs. M1 Abrams tanks transported by heavy rail sat on display.

There were be about 750 to 800 military personnel taking part in the celebration, a defense official told CNN. And that doesn’t include the 900 hundred members of the DC National Guard who were activated to provide traffic control and security on the streets and in the subway system.

Trump was hoping for an enormous crowd, and July Fourth reliably draws plenty of people to Washington. But the last time he delivered an address on the National Mall, on Inauguration Day, he was disappointed by the turnout, or at least in the way the turnout was depicted on the news.

That left some of his aides working overtime to fill out the space along the Mall where he spoke. It wasn’t clear ahead of the event that their efforts would be successful, and some people who were offered tickets this week — including donors and administration officials — said they’d already made other plans.

Trump addressed the masses in front of Abraham Lincoln’s 19-foot marble likeness, framed by the iconic Doric columns of the 16th president’s memorial. He faced a crowd of US military families, patriotic onlookers — and ticketed VIPs, including some of his Republican allies.

It’s all a vastly scaled-up version of how presidents ordinarily celebrate July Fourth, the date American colonists officially served notice to Britain in 1776. Usually the holiday is marked with a picnic for service members and their families on the White House South Lawn, followed by a viewing of fireworks over the Washington Monument.

Presidents haven’t traditionally delivered public remarks, much less an address on the National Mall. And the day hasn’t been marked by such overtly militaristic displays.

That caused concern even among US military brass that their ranks could end up politicized, according to people familiar with the matter. In the planning for the event, Pentagon leaders had reservations about putting tanks or other armored vehicles on display, a source with direct knowledge of the situation said.

As the final details come together, several top military chiefs of the individual services are not attending and instead are sending alternates, though some said they had prior plans.

The White House insisted Trump’s speech would not be political and would instead honor the military and its service to the country. But Trump has a way of turning even official events into political moments, including at military installations, often to the delight of the rank-and-file troops he’s addressing.

And even his own top aide, Kellyanne Conway, told reporters this week that the speech would highlight “the success of this administration.”

The military displays Trump ordered up — which include the flyovers, tanks and other ceremonial units such as the Old Guard Fife and Drum Corps, the US Army Band (“Pershing’s Own”) and the US Marine Corps Silent Drill Team — have led some to compare the event to the authoritarian parades seen in places like China or North Korea.

But Trump’s inspiration was actually a parade in France, which he witnessed with delight on Bastille Day in 2017. He immediately began formulating plans to stage a parade of his own, though cost estimates later caused him to reduce his aspirations to the speech and military pageant that will be seen Thursday.

Through it all, Trump has taken enormous interest in even the smallest details, from the staging to the military equipment on display.

It’s those details that are likely to ratchet up the costs of the event, though the massive fireworks display that will cap the evening has been donated.

Already, the National Park Service is redirecting nearly $2.5 million to help cover costs related to the July 4 extravaganza, according to The Washington Post, money that the paper says is usually “primarily intended to improve parks across the country.”

It’s not clear how much the event will cost altogether, though Trump attempted to downplay the amount on Wednesday.

“The cost of our great Salute to America tomorrow will be very little compared to what it is worth,” he wrote on Twitter. “We own the planes, we have the pilots, the airport is right next door (Andrews), all we need is the fuel. We own the tanks and all. Fireworks are donated by two of the greats. Nice!”

That isn’t entirely truthful — the planes used in the flyovers came from California, Missouri, Kentucky and Florida. And the costs of the event extend well beyond the military equipment.

For example, just the “transparent ballistic armor” used to protect the President during his speech could cost more than $24,000, according to government records.

This story has been updated with additional developments Thursday.