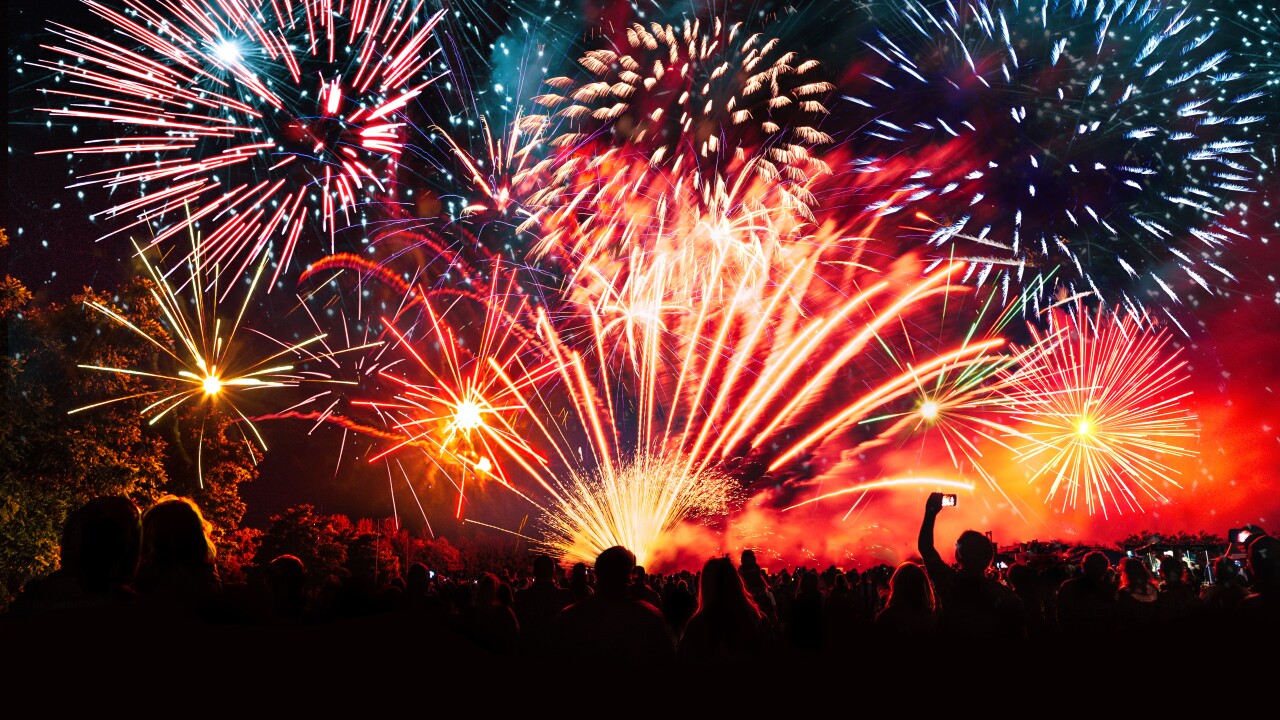 Although many people view Memorial Day as the American holiday that unofficially kicks off summer, it could be argued that the Fourth of July is summer’s biggest, best holiday.

Gatherings often involve hot dogs and hamburgers and ice cream, not to mention those colorful explosions in the sky, otherwise known as fireworks.

While small towns and counties throughout the USA celebrate the country’s birthday with these light-up-the-sky displays, there are a number of stand-out events in destinations around the country.

Check out these big July 4 events sure to please the fireworks fan, parade seeker and eating-contest enthusiast.

Macy’s 4th of July Fireworks
2019 marks the 43rd year of the Macy’s 4th of July Fireworks Show. More than three million spectators across three of New York City’s boroughs — Brooklyn, Manhattan and Queens — will watch the spectacle, which takes place over the city’s East River. But that’s just a quarter of the number of people who’ll be watching the display from their televisions. In addition, 2019 will also feature a revival of firework explosions from the Brooklyn Bridge.

Jennifer Hudson has recorded a special rendition of “Somewhere Over the Rainbow” to be played at the event, and musical guests including Luke Bryan, Maren Morris and Brad Paisley will all be performing as well.

Big and Loud: This is how Washington’s National Mall Fireworks are described on the National Park Service’s website. Snagging a spot on the coveted steps of the Lincoln Memorial won’t be easy, but it will be worth it.

Still, there are plenty of viewing areas in and around the D.C. area on July 4 — try one of the city’s rooftop bars or catch them from across the river in Arlington — if you’d prefer to avoid the massive crowds sure to be gathered in the National Mall area.

This year, President Donald Trump will be delivering his “Salute to America” speech from the Lincoln Memorial from 6:30 to 7:30 p.m. ET, so expect heightened security in the area.

There will be music, too. On the West Lawn of the US Capitol, enjoy “A Capitol Fourth,” a live concert co-sponsored by the National Park Service and the National Symphony Orchestra. John Stamos will once again be hosting and will be joined by Carole King, Vanessa Williams and Colbie Caillat, along with many other musical acts. It will be broadcast live on PBS starting at 8 p.m. ET.

Granbury’s Old-Fashioned 4th of July Celebration
Presented by the Granbury Chamber of Commerce in this Texas town, about 35 miles southwest of Fort Worth, the 4th of July celebration is a three and a half-day affair. You can bet this means there’s a lot more than just fireworks on the agenda.

CEO Mike Scott says they’re expecting somewhere around 50,000-100,000 people to attend the events, but he noted that the parade alone draws a crowd upward of 20,000 folks. Those are impressive numbers for a town with a population of less than 10,000.

The celebration takes place in the historic townhouse square. Purchase a beer from one of the bars on the square’s perimeter (open containers are OK here) before grabbing a bite from one of the many popular food vendors. From fruit kabobs drizzled in chocolate to classic Filipino dishes, the food scene is a draw in and of itself.

Museum lovers will appreciate the free admission to some of the city’s most popular museums, and attractions such as the National Museum of American Jewish History, and music lovers won’t want to miss a second of the (free!) outdoor concerts. In 2019, catch performances by Jennifer Hudson and Meghan Trainor.

The main events are, of course, the fireworks displays — and, yes, that is displays, plural. Catch the first show over the Delaware River waterfront and the second above the Philadelphia Museum of Art, where for the first time, you’ll also be able to see a live performance by the US Army Field Band on the museum’s steps.

Boston Pops Fireworks Spectacular
Each year on July 4, the famed Boston Pops Orchestra puts on a patriotic music and fireworks show that sets the standard for the United States. This beloved event is free, and gates open three hours before the show.

If you’re a fan of Queen Latifah, Arlo Guthrie or America’s Got Talent stars Amanda Mena and The Texas Tenors, then you’re in luck, because they will all be performing at the event.

If you can’t make the July 4 show or just want to attend something less packed, there’s a concert minus the fireworks on July 3.

If you can’t physically get yourself to the corner of Surf Avenue and Stillwell in Brooklyn’s Coney Island, you can still watch the eating competition by tuning into ESPN for its live coverage of this determinedly patriotic event.

Legend has it that in 1916 four friends made a friendly wager on which of them was the most patriotic. They decided the winner would be the man who consumed the most hot dogs. Today, it lives on and is an Independence Day highlight for eating contest spectators and wannabe contestants.

AJC Peachtree Road Race
Looking to jump start this most patriotic of holidays with a heart-rate boost? First run in 1970 with a total of 110 finishers, the AJC Road Race — a 10K — has grown exponentially. The finish-line swag may contribute to the race’s popularity; Jay Holder, director of marketing for the Atlanta Track Club, says that the shirt is indeed “noteworthy.”

Every year, hundreds of local artists submit their designs, and the public chooses from the top five contenders.

“The winning design is a closely guarded secret only revealed on race day when the first runners cross.” It’s an exciting event for both runners and spectators and may help justify any lack of restraint demonstrated at any post-race barbecue you’ll be attending. Hey, it takes energy to cheer from the sidelines.

Cleveland Rock N’ Boom
Though celebrating July 4 from a science museum may not seem like a traditional holiday experience, the Great Lakes Science Center is offering one of the most unusual views in town to witness Cleveland’s fireworks display.

Guests will be able to experience the show from the deck of the historic 618-foot Steamship William G. Mather, which first set sail in 1925.

If you’d rather witness the fireworks from the shore, you can opt for the Blossom Music Center’s “Salute to America” celebration in the stunning Cuyahoga Valley National Park. The Blossom Festival Band will be playing a mix of patriotic favorites and Broadway hits. Remember to buy your tickets in advance through their website.

Some bonus places
If you can’t make these big events, here’s a small sampling of other fantastic celebrations all around the US of A:

— Anchorage, Alaska: The biggest city in Last Frontier has lots and lots of sunlight this time of year to make the most of the holiday. Start with a pancake breakfast to fuel a full day that ends with fireworks scheduled around 11 p.m. (Yes, it takes that long to get dark).

— San Diego, California: Fireworks are shot off from four barges at the annual Big Bay Boom show with accompanying music broadcast on radio.

— Tupelo, Mississippi: The South knows how to make and eat a good meal, so it’s natural to hold an “All-America City Family Picnic in the Park” in Tupelo. And with stomachs full of food and hearts full of national pride, the evening is capped off with fireworks.

— Kansas City, Missouri: The KCRiverfest cranks up at 3 p.m. local time at the Berkley Riverfront. Enjoy a kids’ scavenger hunt, cornhole tourney and live music before the fireworks.

— Greensboro, North Carolina: Come celebrate in North Carolina’s third-largest city at the two-day Fun Fourth Festival. The fireworks action comes a day early, on July 3, along with a block party. Then on the Fourth, enjoy a “Freedom Run” and street festival.

— Tulsa, Oklahoma: They’ll be gathering at Veterans Park, River West Festival Park and along the Arkansas River on July 4 for Freedom Fest 2019. Before the fireworks are shot off from the 21st Street Bridge, people can enjoy live music, pony rides and even an ax throwing contest!

— Austin, Texas: If you’re a fan of country music you won’t want to miss the chance to see Willie Nelson, Luke Combs and Alison Krauss perform live at a patriotic picnic hosted at the Austin360 Amphitheater.

— Roanoke, Virginia: This mountain valley city has a beautiful backdrop for its annual fireworks show alongside the Roanoke River. And enjoy patriotic music, food trucks and bouncy castles! Rain date is July 5.