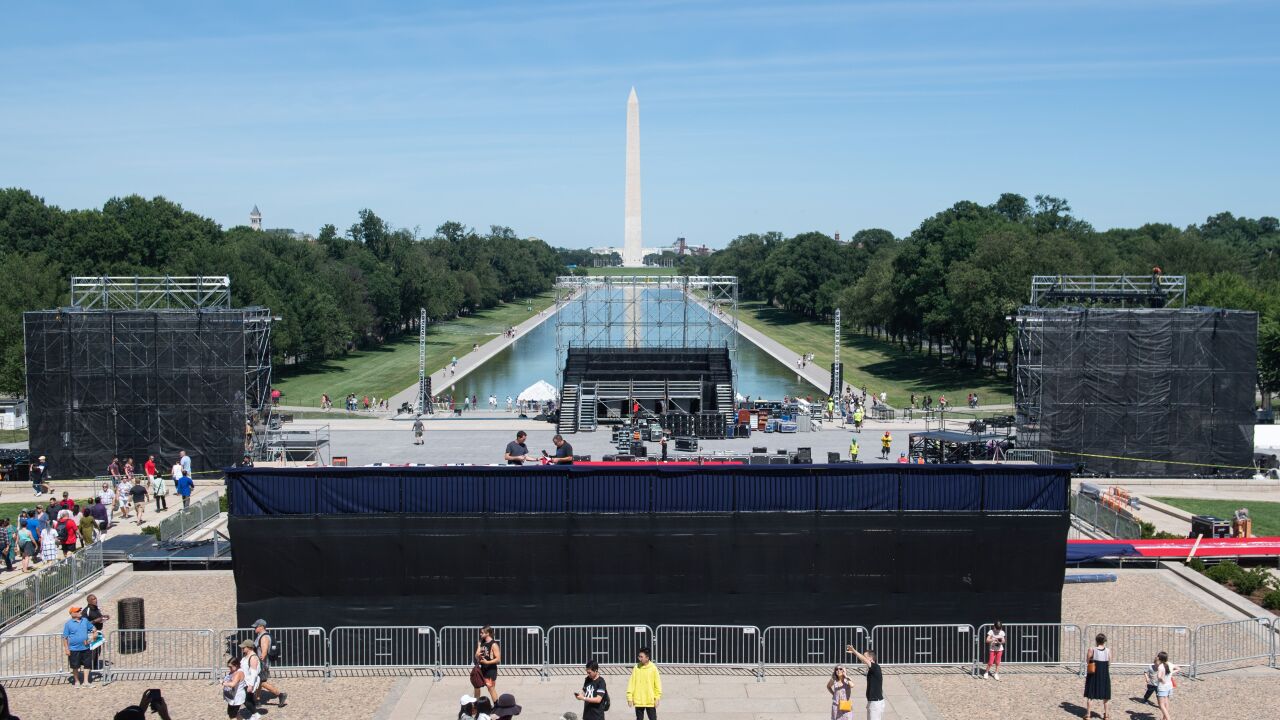 Workers build a stage and bleachers for the “Salute to America” Fourth of July event with US President Donald Trump at the Lincoln Memorial on the National Mall in Washington, DC, July 1, 2019, which will feature flyovers by the Blue Angels, an airplane used as Air Force One, as well as military demonstrations and a speech by Trump. (Photo by SAUL LOEB / AFP) (Photo credit should read SAUL LOEB/AFP/Getty Images)

WASHINGTON — President Donald Trump claimed Tuesday that “the Pentagon and our great Military Leaders are thrilled” to be participating in his newly revamped Fourth of July celebrations in Washington, which will feature, “incredible flyovers,” fireworks and a speech from the President.

“Big 4th of July in D.C. “Salute to America.” The Pentagon & our great Military Leaders are thrilled to be doing this & showing to the American people, among other things, the strongest and most advanced Military anywhere in the World. Incredible Flyovers & biggest ever Fireworks!” the President tweeted.

The US military is expected to be front and center during Thursday’s celebration which will showcase a wide variety of weaponry, including M1 Abrams tanks.

Several types of military aircraft are expected to take part in the event including the new Marine One Presidential VH-92 helicopter, which will be making its debut, a defense official confirmed to CNN.

While it remains unclear whether Pentagon officials are actually as excited about Trump’s July 4th event as the President insists they are, it seems as though military leaders could be very visible as the service chiefs have been asked to stand with Trump during the celebrations, according to a different defense official.

Ceremonial military units such as the Old Guard Fife and Drum Corps, the US Army Band (“Pershing’s Own”), and the United States Marine Corps Silent Drill Team are also expected to participate in the event.

Additionally, 900 members of the DC National Guard have been called up to help with traffic control and security on the streets and in the Metro subway system on July 4, according to a military official.

That is nearly triple the typical 300-person activation for July Fourth activities in Washington because a larger security footprint is needed, the official said.

Earlier in his administration, Trump had announced his intent to hold a military parade on Veterans Day in Washington, DC, however he canceled those plans following estimates that put the cost of such a parade at tens of millions of dollars.

Trump blamed local Washington officials for the high costs of the canceled parade.

Another US military official told CNN last week that the cost of using military assets in this year’s July Fourth celebration was estimated to be less than $1 million and that the personnel involved will be drawn from units based in the Washington area, helping to drive down costs.

US military aircraft on display

Multiple types of military aircraft, including the B-2 stealth bomber and the F-22 fighter jet, are expected to participate in the celebration, according to two Pentagon officials.

Marine MV-22 Ospreys and the new VH-92 Marine One aircraft will also be involved, according to another defense official.

CNN had also previously reported that the Blue Angels demonstration team, which typically flies F/A-18s, would be present along with F-35 stealth jets. The VC-25 aircraft that serves as Air Force One when the President is on board, is expected to have a role, as well.

While the per-hour cost to fly a B-2 and F-22 is $122,311 and $65,128 respectively, the US Air Force says “flyovers are conducted at no additional cost to the taxpayer as they are accomplished using pre-planned and paid for training hours allocated to the units.”

“These flyovers serve as valuable real-world time-over-target and other training requirements for our pilots and crews,” according to the service.

However, special accommodations are being made to allow the flyover to take place.

The Federal Aviation Administration announced Tuesday that operations at Ronald Reagan Washington National Airport would be suspended between 6:15 p.m. and 7:45 p.m. ET to allow a ceremonial flyover of military aircraft.

Such a closure is unprecedented for July Fourth events, an official said. The last such runway closure was in 2015 for a commemorative flight of World War II-era planes.

Yes, there will be tanks

Additionally, the celebrations will feature a small number of M1 Abrams tanks and other armored vehicles, US defense officials have confirmed to CNN.

However, they will not parade down Pennsylvania Avenue due to the need to protect roads and bridges.

Multiple officials said that the current plan is to have a very small number of armored vehicles participate as part of a “static display” at the event on the National Mall, including two M1 Abrams tanks, two Bradley fighting vehicles and an armored M88 Recovery Vehicle, along with an “appropriate” number of accompanying personnel.

The vehicles will not be moving thereby reducing the chance of damaging local infrastructure.

Trump confirmed tanks would be present during remarks in the Oval Office Monday.

“I’m going to be here and I’m going to say a few words and we’re going to have planes going overhead, the best fighter jets in the world and other planes too and we’re gonna have some tanks stationed outside,” Trump said while also acknowledging that measures would need to be taken to protect infrastructure.

While the US continues to operate the M1 Abrams tank the US military has not used World War II-era M4 Sherman tanks since the 1950s.

“We have some incredible equipment, military equipment on display — brand new. And we’re very proud of it,” Trump said.

The Washington Post was first to report Trump wanted tanks to take part in the July 4 event.