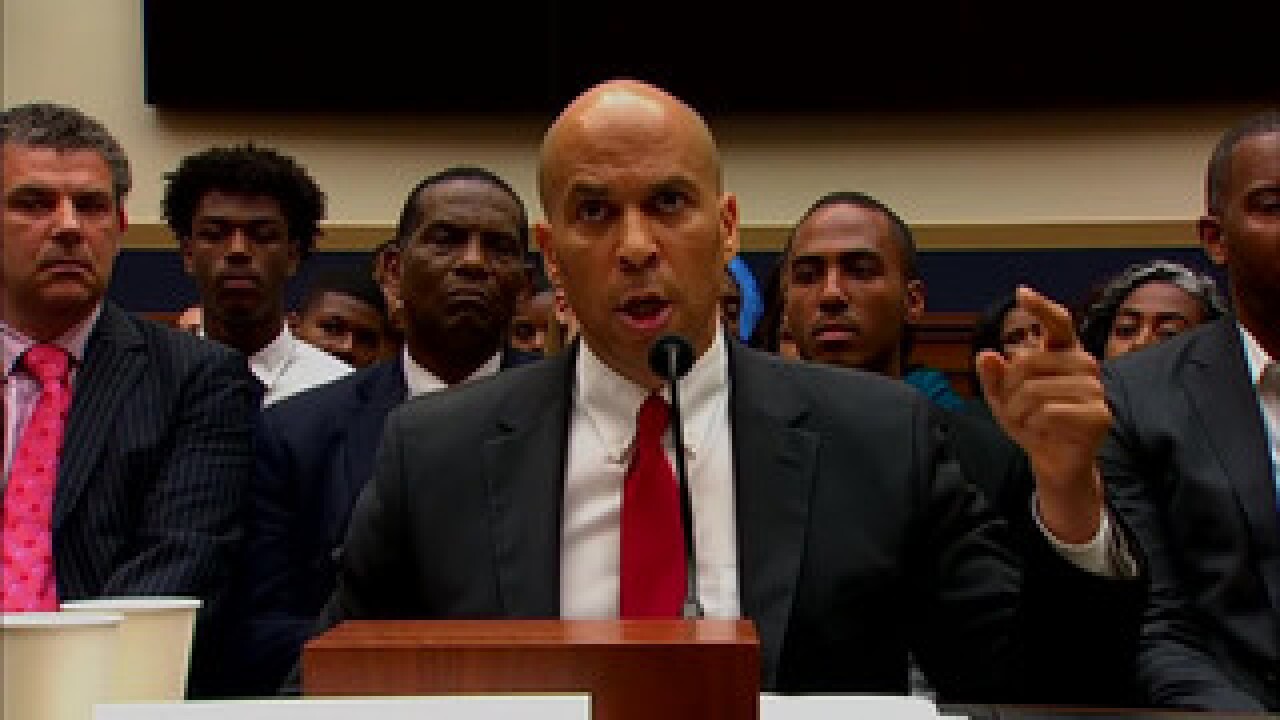 The House Judiciary Committee’s subcommittee on the Constitution, Civil Rights and Civil Liberties will hear from the three as it considers legislation that would establish a commission to study the consequences and impacts of slavery and make recommendations for reparations proposals.

The measure, HR 40, is sponsored by Democratic Rep. Sheila Jackson Lee of Texas and was first introduced decades ago by former Rep. John Conyers. Booker introduced a companion version of the bill to the Senate in April.

Booker, the first witness to speak, told the committee that America has not yet grappled with racism and white supremacy and that the hearing presents a “historic opportunity to break the silence, to speak to the ugly past and talking constructively about how we will move this nation forward.”

“It’s about time we find the common ground and the common purpose to deal with the ugly past and make sure that generations ahead do not have to continue to mark disparities,” Booker said on Wednesday.

Sen. Cory Booker at reparations hearing: "We as a nation have not yet acknowledged and grappled with racism and white supremacy that has tainted this country and continues today" https://t.co/c5XgfQ11gx pic.twitter.com/oJJ0XcPnaL

The scene outside the hearing room Wednesday morning was chaotic given the wide interest in attending the hearing. Massive crowds waited to get inside the committee room, which was at maximum capacity as the hearing got underway.

“I do think that it’s worthy of attention,” House Speaker Nancy Pelosi told CNN in a brief interview at a separate event in Washington. “And that’s what it will get.”

The topic of reparations has been raised to the forefront as Booker and other Democratic 2020 presidential candidates have weighed in on the issue while on the campaign trail.

At a conference in April hosted by Rev. Al Sharpton’s political organization, several of the top-tier 2020 Democratic presidential contenders said they would support the House bill. The issue of reparations, which was kept on the fringes of mainstream political debate for decades, has emerged in the 2020 primary as a litmus test for Democrats vying to unseat President Donald Trump.

Booker has expressed frustration with the conversation around reparations — stating that it is being “reduced to a box to check on a presidential list, when this is so much more of a serious conversation.”

Ta-Nehisi Coates at reparations hearing: "Enslavement reigned for 250 years on these shores. When it ended, this country could have extended its hollow principles of life, liberty and pursuit of happiness to all. But America had other things in mind." https://t.co/c5XgfQ11gx pic.twitter.com/ofwKajxT1q

“Do I support legislation that is race-conscious about balancing the economic scales? Not only do I support it, but I have legislation that actually does it,” Booker told CNN’s Jake Tapper during a CNN town hall in Orangeburg, South Carolina, in late March.

On Tuesday, Senate Majority Leader Mitch McConnell said he opposes paying reparations, arguing “none of us currently living are responsible” for what he called America’s “original sin.”

“I don’t think reparations for something that happened 150 years ago for whom none of us currently living are responsible is a good idea,” the Kentucky Republican told reporters.

Booker said Wednesday that there is “tremendous amount of ignorance” in McConnell’s statement.

“One of the big strikes of ignorance he said is that somehow this is about a compensation, writing a check to somebody, and reducing the urgency of this conversation to simply that. That alone is problematic,” Booker said in an interview on SiriusXM radio Wednesday morning ahead of the hearing.

Coates put a spotlight on the subject with his 2014 piece in The Atlantic titled “The Case for Reparations.”