Fake obituary stuns Chesterfield veteran and his family: ‘I woke up to the sound of my mom crying’ 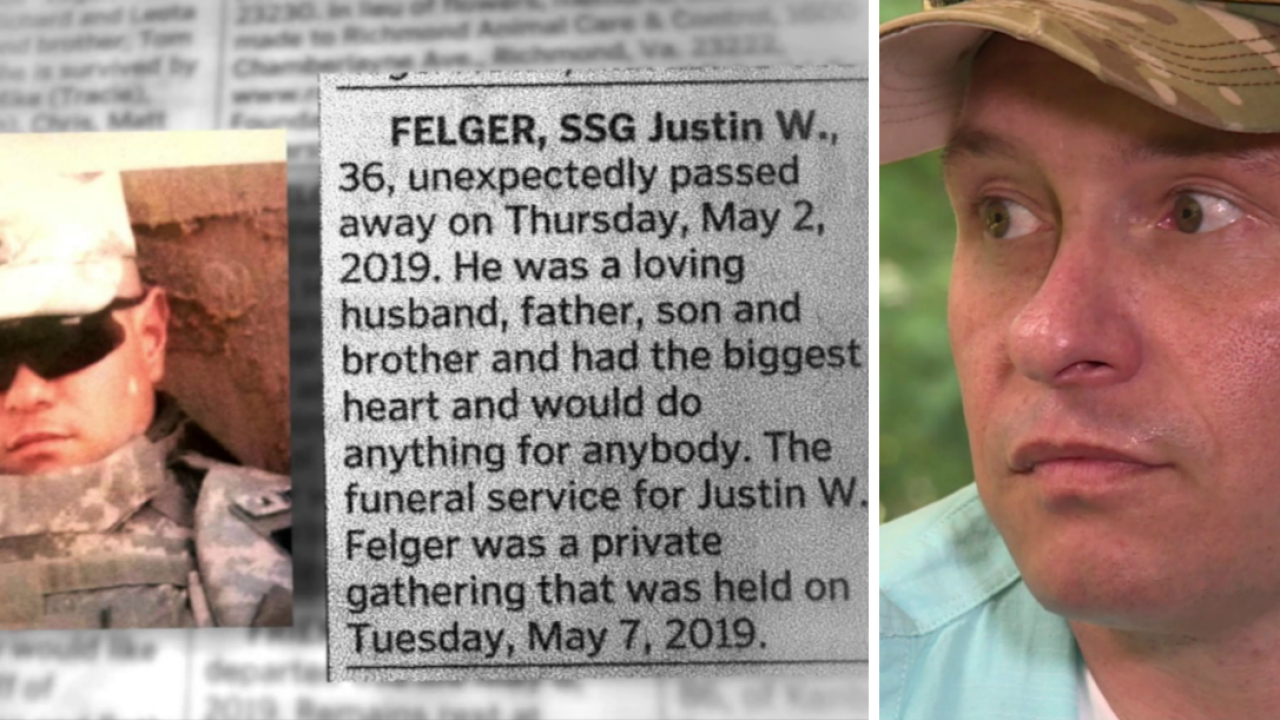 CHESTERFIELD COUNTY, Va. -- Justin Felger joined the United States Navy shortly after 9/11 but found his calling as an infantryman in the Virginia Army National Guard, which put him on the front lines in Iraq.

“I wanted to fight for the red, white, and blue,” Felger said. “Every time we went out there, it was every corner, every step we took you had to worry about losing your life.”

But last month he became a fallen soldier, or so it was written.

“Woke up to the sound of, well, my mom was crying,” Felger said. “My dad had to break the news to me.”

An obituary published in the May 9 edition of the Richmond Times-Dispatch claimed that the Chesterfield native had died unexpectedly at the age of 36.

The minutes and hours that followed were chaotic.

“Roller coaster, up and down,” Felger said. “My mom getting condolence phone calls, my dad getting emails.”

The family immediately reached out to the newspaper, desperate to figure out how this happened.

“There was an error made, they have standard operating procedures, they check, but in this case somebody missed something,” Felger said he was told.

“We can confirm that a private citizen submitted this false information to the Times-Dispatch through our online obituary portal,” said Jason Dillon, vice president of advertising for the Richmond Times-Dispatch.

The obituary was taken off the website, and the next day, a correction was printed.

It read: “On Page B4 Thursday, the Times-Dispatch erroneously published an obituary for Staff Sgt. Justin W. Felger. Felger is alive. We regret the error and have apologized to Felger and his family.”

But the bogus obit was just the tip of the iceberg.

About that same time, Felger said his Facebook and email accounts were hacked.

“They accessed my whole life by social media,” Felger said. “I had to stop all my line of credit, I’ve had to call everybody and explain to them, ‘No, I’m not deceased.’”

The stress caused by all of this has been taxing for Felger, who is medically retired from the service, and recently moved back into his childhood home so his parents could help him recover from back surgery.

He has also been dealing with the effects of PTSD ever since he got back stateside.

“I didn’t want to be one of those people, one of the vets that committed suicide,” Felger said. “It’s been really hard maintaining with my recovery.”

And it’s been hard to fathom what kind of person would fake the death of a decorated war veteran.

“The people I know would not joke about death, because we faced it a lot,” said Felger.

Longtime local sheriff’s deputy Miles Turner said it was obvious that the culprit does not respect the men and women who have served this country.

“It’s almost like another form of stolen valor as far as I’m concerned,” said Turner, who owns and operates Law Enforcement Consulting LLC.

He said this case was unusual, but falsifying information about someone online is getting easier by the day.

The good news, he says, is that police take cases like this extremely seriously.

And under Virginia law, submitting false information to a publication is a crime.

“We consulted Richmond authorities about how to proceed,” said Dillon. “They told us that Staff Sgt. Felger should contact law enforcement if he was interested in having the case investigated.”

Felger has not yet contacted police, and said he has no idea who was responsible for turning his life upside down.

“To hear my friends and family have to suffer through it was probably worse than anything,” Felger said.

This soldier spent most of his military career in the line of fire. He just never expected to witness his own eulogy.

“Wasn’t the way I really wanted to go.”