President Donald Trump called D-Day veterans assembled in Normandy on Thursday “the pride of our nation.”

“You are the glory of our republic and we thank you from the bottom of our hearts,” Trump said in remarks at the Normandy American Cemetery in northern France.

“You are among the very greatest Americans who will ever live,” Trump said.

Speaking after his French counterpart Emmanuel Macron, Trump said the country’s debt to the veterans who participated in the landings was “everlasting.”

Trump is the latest in a string of presidents to mark the anniversary of D-Day in France, each successive ceremony seeing fewer and fewer of the veterans who carried out the harrowing mission make it back to the windswept cliffs and stretches of sand. Now in their 90s, and of a thinning generation with first-hand memory of the war, those veterans will join Trump and other world leaders to mark the occasion near the American cemetery at Colleville-sur-Mer.

Trump delivered remarks and met with some of the few remaining survivors from that day — many of whom were teenagers when they received their orders. Later he’ll sit for talks with Macron before departing for his golf course in Ireland, where he is spending two nights.

The US alliance with France and other nations who fought together in World War II is “unbreakable,” Trump said Thursday in Normandy.

“Our cherished alliance was forged in the heat of battle, tested in the trials of war, and proven in the blessings of peace,” Trump said. “Our bond is unbreakable.”

He said the commemoration ceremonies on the cliffs and beaches of Normandy were meant to honor the men — many just teenagers — who lost their lives there.

“We come not only because of what they did here, we come because of who they were. They were young men with their entire lives before them,” Trump said. 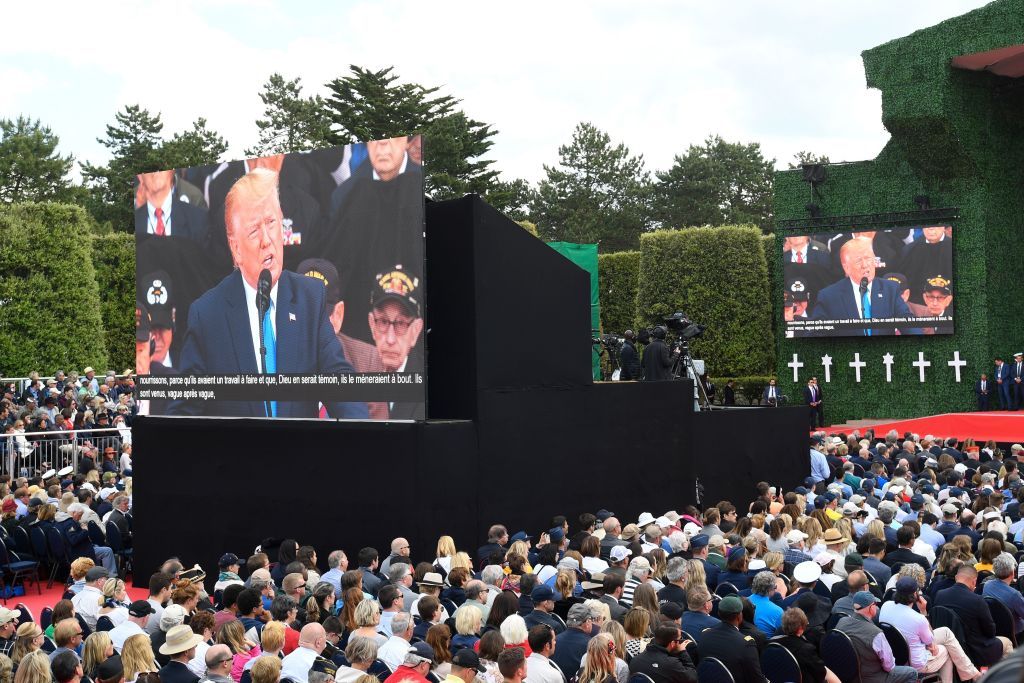 Born a year after the fighting ended, Trump is a beneficiary of the post-war prosperity those veterans’ gallantry helped provide. And while Trump this week has already hailed the heroism of the Allied forces, he also downplayed the very notion of obligatory military service, saying his own avoidance of the Vietnam War was because he “was not a fan of that war.”

The comment, and Trump’s habit of desecrating certain war heroes while wrapping himself in the militaristic elements of his position, will color Thursday’s appearance, which comes after a state visit to the United Kingdom.

During his three-day stay in London, Trump’s hosts sought to underscore the importance of the western alliance and the geopolitical systems that were put in place after the war — some of which, like NATO and the European Union, Trump has questioned.

British Prime Minister Theresa May gifted the President a copy of the Atlantic Charter, which defined US and UK goals for the war and its aftermath.

Queen Elizabeth II, staunchly apolitical, said during a toast that the international institutions created after the war were as necessary as ever.

“While the world has changed, we are forever mindful of the original purpose of these structures: nations working together to safeguard a hard-won peace,” she said.

Appearing wowed by the trappings of royal hospitality, Trump has hailed transatlantic alliances during his gracious public appearances.

He stuck closely to script on Wednesday when he appeared onstage to read a prayer during a commemoration ceremony in Portsmouth, on the English south coast.

“Our sons, pride of our nation, this day have set upon a mighty endeavor, a struggle to preserve our Republic, our religion, and our civilization, and to set free a suffering humanity,” Trump intoned before dancers emerged to the upbeat strains of “Boogie Woogie Bugle Boy of Company B,” the wartime ditty sung by the Andrews Sisters.

His reading came from a radio address President Franklin D. Roosevelt delivered on the evening of the Normandy landings.

But even under the weight of history, Trump has also lashed out at all manner of foes, including potential 2020 rival, Democrat Joe Biden, Bette Midler and the mayor of the city in which he was staying.

And confronted during an interview with his own avoidance of war during Vietnam — he received a draft deferment for bone spurs in his foot — Trump revealed a view that questioned the idea of service as a national obligation.

Usually, presidents seek to rise above partisan sniping when overseas or marking moments of historic significance — or both, as Trump is doing this week.

His divided mindset was apparent as he was preparing to depart Ireland for France on Thursday morning.

Two minutes later, it was history on his mind.

“A big and beautiful day today!” he wrote.