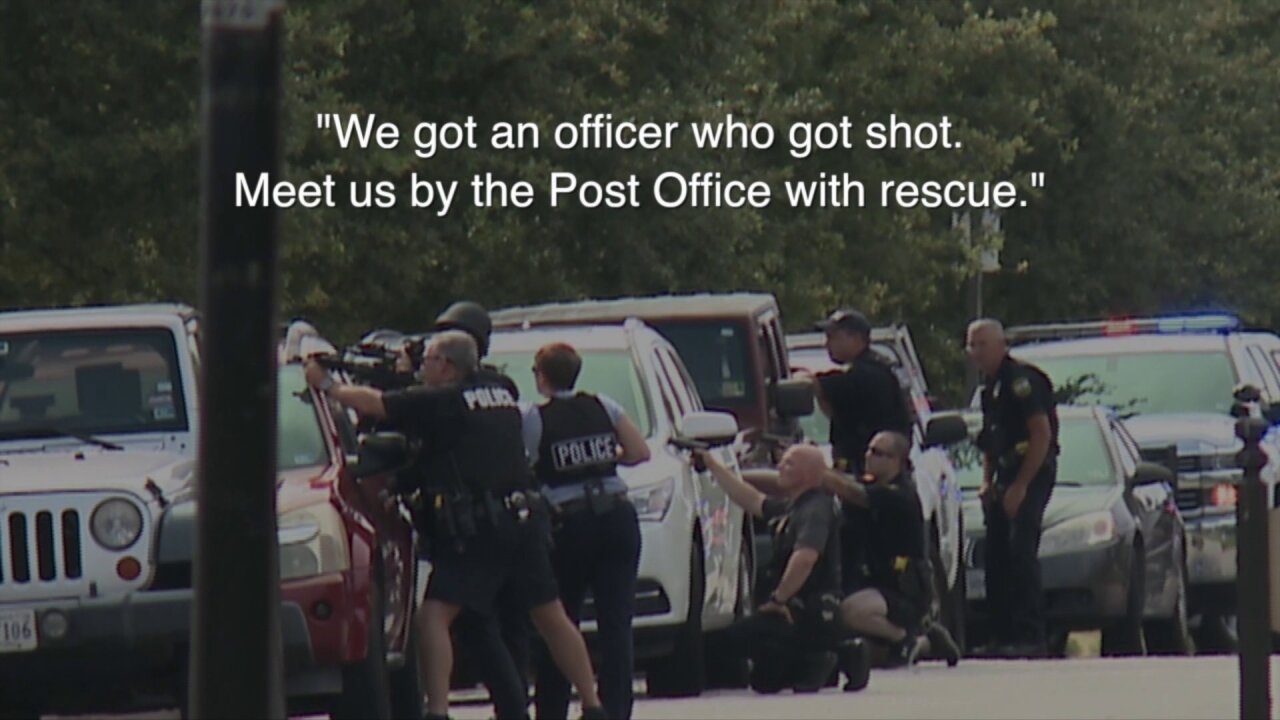 The radio traffic from first responders in Virginia Beach paint a picture of a chaotic scene with officers first finding a man with a gunshot wound outside of the building. Shortly thereafter, officers found additional victims as they entered the building where the shooting was taking place.

Officers talked about trying to figure out where the shooter was located while hearing repeated gunshots as they searched to locate him.

Here is some of the transcribed audio from first responders via the Broadcastify recording:

"We're on the courthouse side of the building right now. Multiple people coming out. We're trying to make an entry.”

"He's a black male, 6-foot-tall, wearing a blue shirt has a gun with a silencer… last seen on the second floor of building 2, 2405 Courthouse Drive Operations Building.”

“We still have active shots with the suspect on the second floor.”

“We got an officer who got shot. Meet us by the post office with rescue.”

“Clear the air. We have the suspect behind a barricaded door. Stay off the radio.”

“We need key card access right now to the second story. Right now, at the north end of the building.”

“We have the suspect in custody at this time.”

What led up to the attack

Craddock was not forced to resign, Hansen said. His "performance was satisfactory" and he was "within good standing in his department." Craddock had "no issues of discipline ongoing," the city manager said.

Craddock's supervisor asked him why he was resigning, a colleague told CNN; Craddock told his boss he was quitting for personal reasons.

But near the end of the workday Friday, Craddock shot one person in a car and then entered the building, where he fired at victims on three floors.

What we don't know: Authorities are searching for a motive. Those who knew him say they didn't see the horror coming.

Joseph Scott said he worked with the shooter for several years and saw him that day. He said the suspect was brushing his teeth in the bathroom, as he always did, and wished him a good day.

The gunman used to be "what I thought was a good person," Scott said.

Another colleague, who did not want to be named for privacy reasons, said Craddock was "a nice guy" and "not a monster." The source said Craddock gave boxes of candy to administrative staff members around Christmas.

On Friday, that same colleague survived the shooting by barricading himself in an office with others. When they were evacuated they had to step over the bodies of coworkers who were killed.

Depend on WTVR.com and CBS 6 News for complete coverage of this developing story.