‘People coming from all over’ to Virginia Beach memorial: ‘We’re suffering, but we are strong’

VIRGINIA BEACH, Va. -- Twelve crosses arrived Sunday afternoon to the growing tribute to the lives lost in Virginia Beach tragedy less than 48 hours after the deadliest mass shooting in the U.S. so far this year.

Stephanie Hodges, who lives in Virginia Beach, said she had to visit the memorial.

“I don't know anybody personally that was a victim, but it just, I've I lived here all my life, so I felt a responsibility," Hodges said.

People dropped off flowers, candles, balloons and other mementos.

“As soon as I hit this area right here, it was tears,” Hodges said. “We don't know what he was going through and I just, my heart goes out to those families.”

Virginia Beach resident Gary Paschang learned about the mass shooting while on vacation.

“About an hour after I got home, I created it, because I just want to let people know that we're suffering, but we are strong,” Paschang said pointing out a work of art he left at the memorial.

. @VBPD Chief Jim Cevera just arrived and comforts those here at the memorial of the 12 victims who lost their lives on Friday. @CBS6 pic.twitter.com/tGTkqU4Dvz

“Thank you for coming out, thank you so much,”Cervera said to folks as he shook hands and offered hugs of condolence.

Emotional support dogs are now out here by the memorial helping this Virginia Beach community with some temporary comfort. @CBS6 pic.twitter.com/fdRVC5Rsgv

In addition, 12 white wooden crosses, familiar sights in the aftermath of mass shootings, arrived from Chicago, customized for the Virginia Beach victims.

“We bring these tokens to you so it affords us an opportunity to mourn the loss of those that have gone,” Greg Zanis said. “But to also celebrate those that we love and bring us together once again as a community.”

Zanis has set up crosses after mass shootings in Orlando and Las Vegas as well as after school shootings at Columbine and Sandy Hook.

Zanis has made 26,379 crosses using the "best lumber" he can find over the past 22 years, according to a February report from WMAQ.

That was when Zanis was tasked with creating 9 crosses for the victims killed in his hometown of Aurora, Illinois, after an employee who was about to be fired gunned down victims inside the warehouse where he worked. 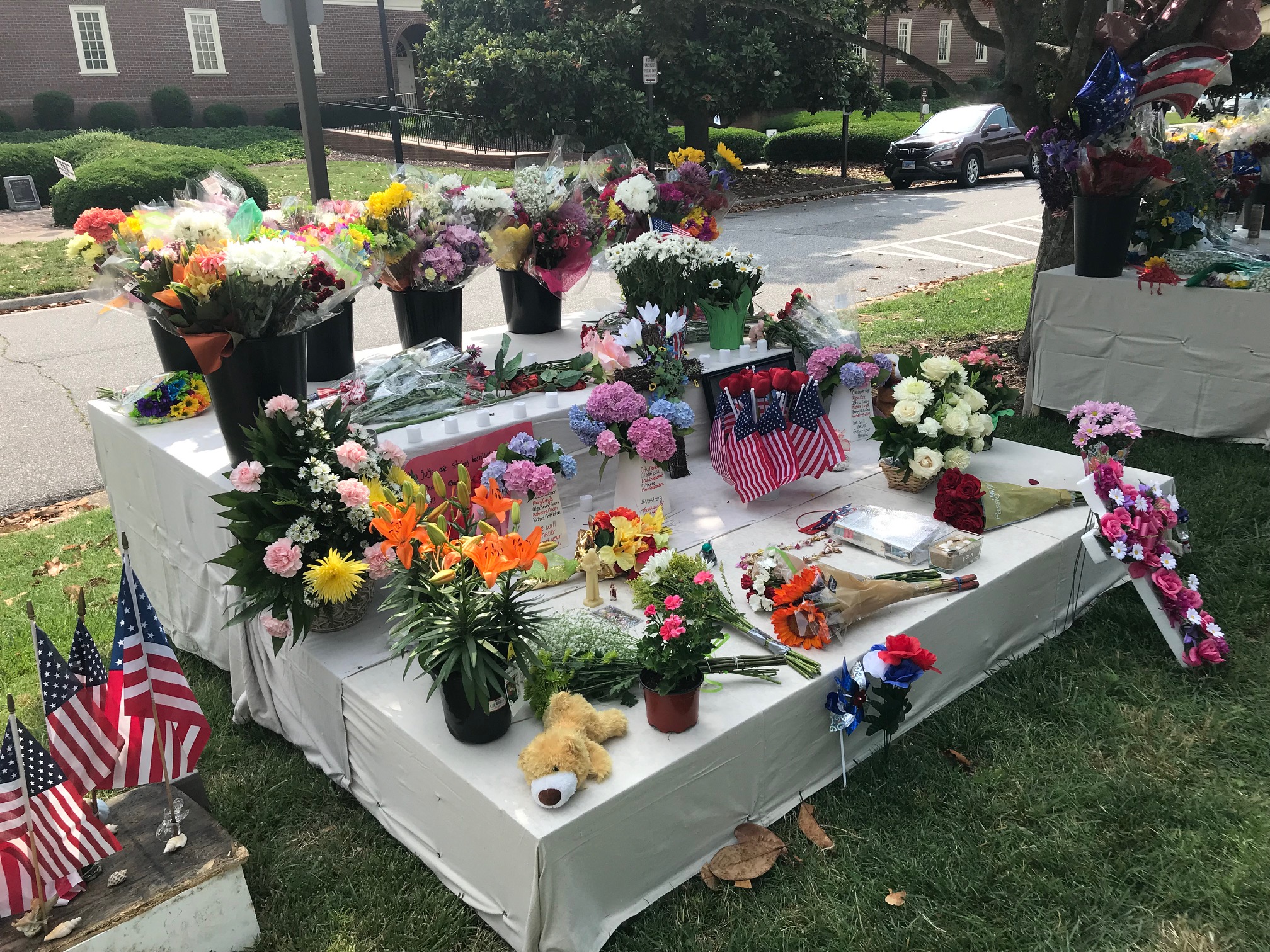 Remorse and resilience: Virginia Beach copes with life after another American massacre

Church signs urged the city to pray for the victims. Shop windows bore the phrase #VBStrong, a hashtag that has become commonplace after our American massacres, with just the sites of carnage changed. At vigils spread across the sprawling city of 450,000, mourners sang "Amazing Grace" and held candles against the night's gathering darkness.

"We had always thought we were a little different," said Dan M., a combat veteran who declined to give his last name as he stirred a vat of honey at the Farmers Market. "But I guess now we're not."

Still, life continued. There were baseball games and barbecues and raucous swim meets at the YMCA. Beachcombers walked the city's long oceanfront, as breakers hushed the sand. On Friday night, a concert at the Farmers Market had continued as planned, though the mood was hushed and somber, said Trish Rovito, a city administrator who helps run the market.

Rovito could hear the quiet conversations, "Are your people OK? Did you hear about so and so?"

No one seemed to know exactly what to do, or how to process the unthinkable.

"Like everyone else I'm shocked," said Jenkins, the florist, taking off her glasses to wipe tears from her face. "It's just so sad."

As if to prove the point, Peggy Bryant, a lifelong Virginia Beach resident, walked into Jenkins' flower shop to buy a yellow tulip for her daughter's birthday. She had just come from the hairdresser, who was devastated after learning that one of her clients had been killed in Friday's shooting.

Bryant said she got emotional while driving past Princess Anne Middle School, where city officials had gathered the night before to tell victim's families news that no one wants to hear.

"If you knew someone killed or not, this is still a community. It's our community," Bryant said.

"There are lot of people grieving that this happened in our city," said Linda Skipper as she arranged the tomatoes on her stand in the Farmer's Market. "But I guess we have to face the reality that these kinds of things are happening all across our country."

Alice Philips, who manages another produce stand nearby, said she knew something terrible had happened on Friday when she heard the sirens wailing down the street, heading to the municipal building. The sirens didn't stop for 45 minutes, she said.

Philips texted with a friend who worked in the city municipal center, a complex of red-brick buildings tucked away in a residential neighborhood. He had lost 12 friends in the shooting, she said.

"The ripples, the waves of the trauma. People are waking up this morning without a spouse, a father, a daughter ..." Phillips said, trailing off.

At a shopping center across from the site of the shooting, Pastor Chris Mitchell Jr. had organized an impromptu prayer service on Saturday afternoon.

As a guitarist strummed quiet chords, about a dozen people gathered in the parking lot. They sang the hymn "How Great Thou Art," and prayed for the souls of the deceased and the victims' families, including the family of the gunman.

"When something like this happens and hits so close to home, you reach for anything you can do," Mitchell said after the service. "Obviously we're going to do all the practical things to give and support but we also thought it was important for us to be here, on the grounds, to just lift our voices and ask God for His mercy."

Mitchell said he went to bed at 1 a.m. on Saturday, and woke three hours later, weeping, asking God what he could do to help.