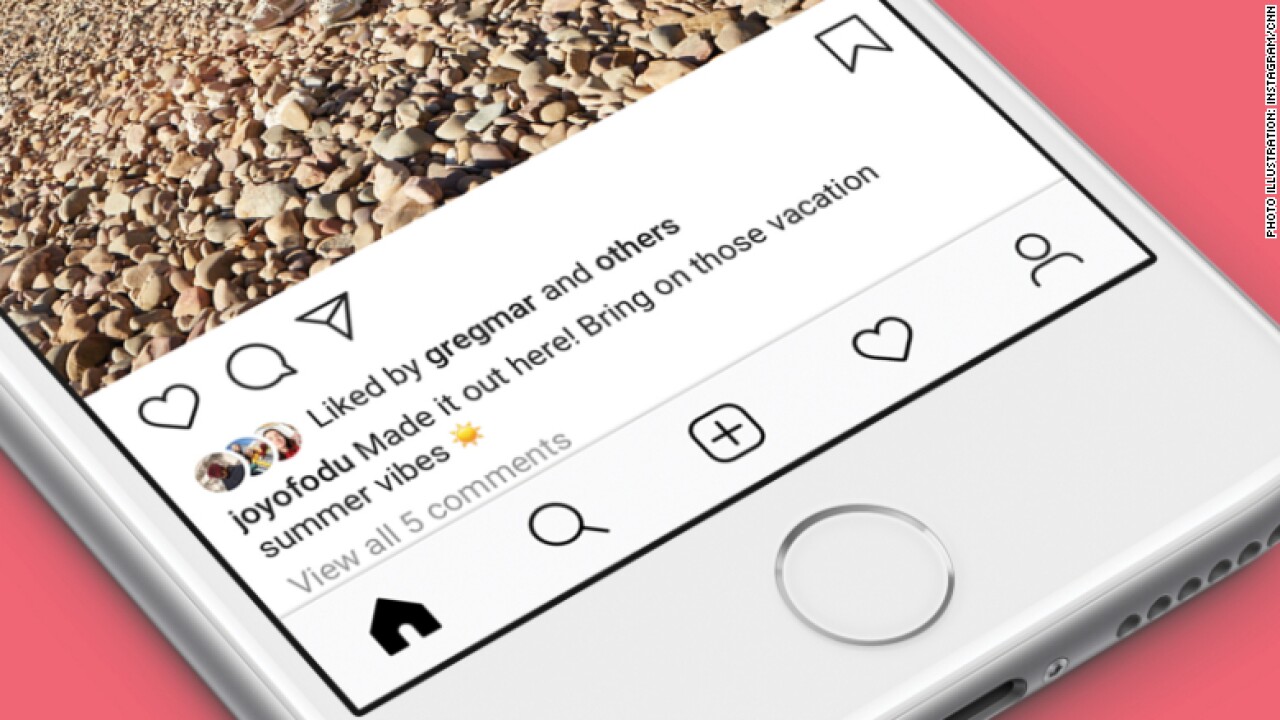 You’ll still be able to see how many likes your own photo received.

You’ll still be able to see how many likes your own photo received.

What is Instagram without likes? Some users are about to find out.

On Tuesday, the Facebook-owned photo sharing app announced it is running a test in Canada starting later this week that hides the total number of likes on photos and videos. Likes, which are shown as hearts on the app, will be removed from the main feed, permalink pages and profiles.

While followers won’t be able to see the total number of likes a post has received, the owner of the account still can.

“We are testing this because we want your followers to focus on the photos and videos you share, not how many likes they get,” an Instagram spokesperson said.

The news was announced at Facebook’s annual developer conference, F8, in San Jose.

The test is likely to elicit a range of reactions, from anger to relief. Likes are often used as a metric of popularity. Some Instagram users feel pressure to rack up the likes or post photos curated for the social media age, such as at Instagrammable pop-ups or social-media friendly restaurants. Not getting enough likes can even affect some users’ self-esteem. According to some studies, Instagram is the most detrimental social networking app for young people’s mental health.

“Likes are powerful because they are immediate feedback,” said Renee Engeln, a psychology professor at Northwestern University. “In a way, likes give you the same kind of hit like a gambler gets at a slot machine.”

Engeln said she’s had young women tell her their day can be ruined when a post doesn’t get enough likes. Sometimes they’ll even delete the photo.

Although removing public-facing likes could result in users posting more authentic content and feeling less pressure on the platform, experts said it’s not a cure-all solution.

“For teenagers, this is great because it would no longer highlight levels of popularity of themselves against other kids,” said Randi Priluck, a professor and associate dean at Pace University focused on social media and mobile marketing. “But they’re still going to see their own likes. People are very driven by rewards so they’re still going to be competing for those likes. It’s not going to fully solve the problem.”

It also doesn’t address or fix some of the other factors that can impact the self-esteem of people on the platform, such as bullying, feeling left out or thinking other people’s lives are better or more glamorous than their own.

“None of that goes away when you take away likes,” said Karen North, an expert in social media and psychology at the University of Southern California. “Regardless if Instagram takes away likes, you can’t escape the inevitable that people will still compare their lives and feel inferior.”

The move, if rolled out more broadly, could also cause some confusion for the influencer marketing industry. Social media stars working with brands on partnerships are often paid based on engagement on their posts, and part of that involves likes.

As a result, comments, follower counts or other metrics could become more important to people making money on Instagram.

“It will certainly create some near-term inefficiencies in how some of these deals get done,” said Kamiu Lee, CEO of influencer marketing platform Activate. “In the long term, the industry will figure it out. It will just shift attention to some of these other things.”

Other social networks, such as Twitter, have also discussed the idea of making likes and follower counts less prevalent. Twitter CEO Jack Dorsey even texted about it with rapper Kanye West, who shared screenshots from their conversation on his Twitter account.

Instagram’s test was first spotted earlier this month by Jane Manchun Wong, a Hong Kong-based woman who searches for unreleased features in popular apps like Facebook and Instagram as a hobby.

At the time, an Instagram spokesperson denied the rumors and said: “We’re not testing this at the moment, but exploring ways to reduce pressure on Instagram is something we’re always thinking about.”