SANDSTON, Va. -- The bloody shrapnel was fake, the raging fire controlled, and the patients were actors. However, for more than twenty local agencies involved in a full-scale training exercise at Richmond International Airport (RIC) Wednesday afternoon, the real life feel of responding to disaster at the airport is invaluable, according to officials.

The Federal Aviation Administration (FAA) requires all airports to execute a full scale disaster response every three years. The drill creates a "real-time practice environment for multi-agency, multi-jurisdictional response coordination that would be necessary in the event of an actual incident.”

The training involved lighting a controlled fire, which shot at least twenty feet in the air, and firefighters working for RIC rushed in to put out the blaze.

Police, fire, and EMS personnel from all surrounding jurisdictions (Henrico, Chesterfield, Hanover, and Richmond) responded to the scene to assist the pretend patients, secure the scene, and help contain any potentially dangerous hazards.

"It’s like seeing a fireworks show, but then you’re going, ‘Oh, I have a job to do,’” said Troy Bell with RIC. "If we had to actually deal with something remotely like this in real life, the partners have already at least had an opportunity to go through a scenario from beginning to end.”

Beyond responding to the practice scene and helping coordinate the action plan, crews worked to collect evidence of what could have caused the simulated crash. Workers with RIC, various airlines, and the local chapter of the American Red Cross practiced assisting the families of passengers who would flock to the airport in a real scenario.

"In the real world, there would be people in the terminal building waiting for that plane to come; they’ve meeting loved ones or associates or colleagues coming in on that flight,” Bell said.

Kyle Ierardi was one of the actors playing a patient. Make up artists from King’s Dominion put a fake chunk of shrapnel on her face that looked very realistic.

“It’s so much fun, and the response from the response team is amazing. It really is, and they get into it too,” Ierardi said.

Ierardi works in HR and as a talent coach for “Haunt” at King’s Dominion. She flies several times each year, so she said it is good to see local agencies working on their emergency response plan, even if it is a scenarios no one wants to imagine.

“Oh it’s awesome that they’re training and doing things like this,” Ierardi said. 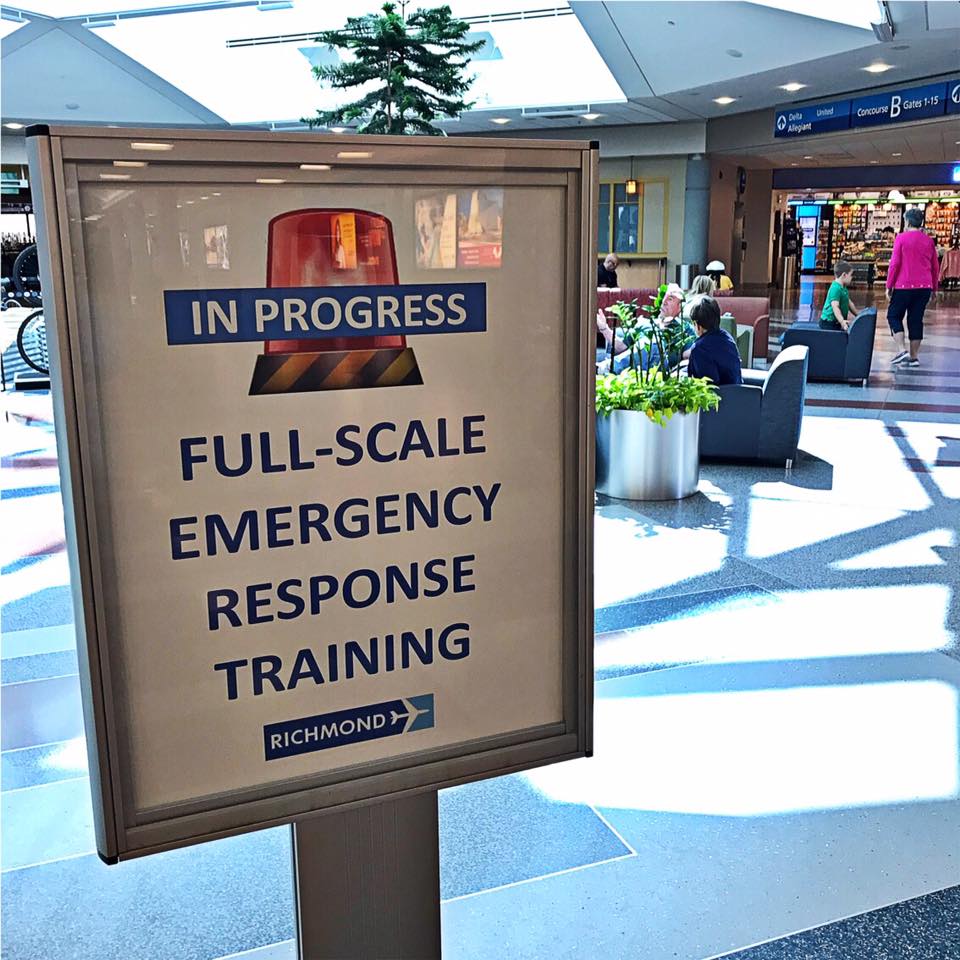 More than 300 people from across the region took part in the drill, officials said.