PORTSMOUTH, Va. — Former Police Chief Tonya Chapman says she was forced out of office by certain members of the Portsmouth Police Department and added that she believes race played a factor.

In a multi-page statement to WTKR, Chapman laid out what she believed to be a reasoning for why she was ultimately asked to resign, pointing to continuous issues with some in her department that did not want her as Chief of Police, and regularly looked into establishing a “no confidence” vote against her.

Chapman added in her statement that she was caught off guard by City Manager L. Pettis Patton asking her to resign. She added that she also was given two months severance pay and thinks she should get six months and a good recommendation from the Portsmouth Police Department.

“I can assure you that I did not “quit” on the citizens of Portsmouth. My mother did not raise me to be a quitter. She raised me to be a strong woman. As such, my resignation was not tendered under my own volition. This was a forced resignation and our City Manager was the conduit,” said Chapman in part of her statement.

While the 29-year law enforcement professional did not directly single one person out or a certain group of individuals for using race as a reason for not wanting her as Portsmouth Police’s Chief of Police, Chapman did bring up that she was told the only other chief they have generated a vote of “no confidence” on was a former black male chief.

Chapman also said she was told by multiple people within the department that the previous white chief of police for the city came in and “turned this department upside down to include dismantling units and transferring personnel due to various allegations and they did not even attempt a vote of “no confidence” on him.”

“Some quite frankly did not like taking direction from an African American female,” added Chapman, who said that there were officers in the department that did not like her style of leadership and did not want her to hold them accountable for their actions.

Chapman also eluded to incidents that were “so inflammatory” she did not want to make them public due to a “concern of public safety.”

Chapman became Virginia’s first African American female chief of a municipal police department when she took on the position in February of 2016.

In her statement, Chapman spoke about the things she did to help promote a positive image of the Portsmouth Police Department following what was described to her as external strife that existed between the community and the police department as a result of several officer-involved shootings.

In response to the letter, the police department, Fraternal Order of Police, and several city council members declined to comment.

The City Manager hasn’t responded to a request for comment.

See Chapman’s full statement in the photo gallery at the bottom of this story. 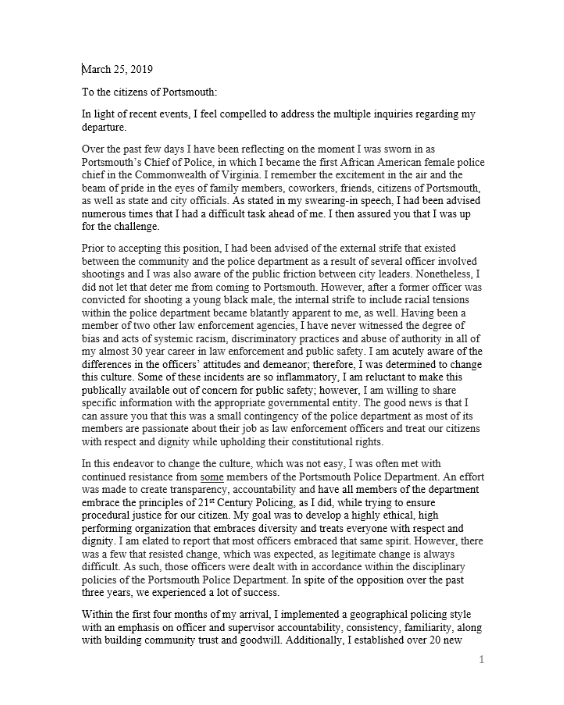