Googling ‘Florida man’ is the latest internet fad. Here’s why 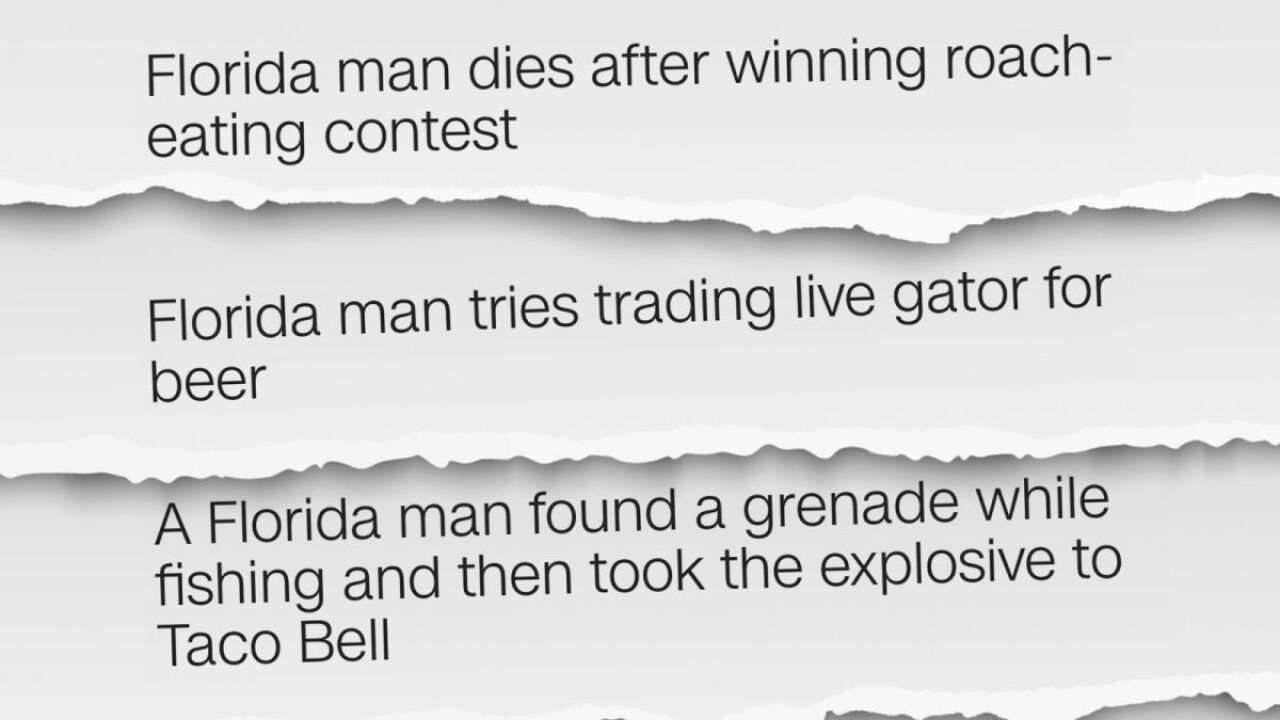 Florida has earned a reputation for being home to some colorful characters — most notably the “Florida man.”

He isn’t actually a single person but rather a trope of all the Florida men who’ve made headlines for doing something … unusual.

And he’s now starring in the latest internet fad: the “Florida man” challenge, in which you Google “Florida man” and your birthday to see what crazy news story from the state pops up.

From botched robberies to deadly cockroach-eating contests, it seems like there’s a wild story about a Florida man for every day of the year.

But what is it about the Sunshine State that generates so many nutty stories?

There are several theories:

But beneath it all, there’s sometimes a deeper element at play in many of these “Florida man” stories — one, that’s no laughing matter.

Thanks to Florida’s strong public records laws — also known as Sunshine Laws — it’s easy for journalists to get their hands on police incident reports and churn out attention-grabbing stories.

“Florida has got one of the broadest public records laws in the country,” says Barbara Petersen, president of Florida’s First Amendment Foundation.

“As soon as that incident report is filed (by law enforcement), we can go and make a public record request and get it.”

The wacky headlines also might have to do with a huge, diverse population interacting under sometimes suffocating humidity.

“People don’t recognize how huge Florida is. The number of people per square mile is highly compacted,” says Al Tompkins, a senior faculty member at The Poynter Institute for Media Studies, in St. Petersburg, Florida. “When you put more people in a place, you’re going to end up with more crazy stuff.”

Florida’s population stands at more than 21 million people. On top of that, the state had more than 126 million visitors in 2018. And while it’s a big state, most people are concentrated along the coastline or near the big theme parks, said Florida journalist Craig Pittman, who wrote a book on Florida’s quirks.

To top it off, it’s hot and sunny year-round, so people are always out and about.

“Eventually, they’re going to end up chasing each other around with machetes and arguing (about) whose dog pooped on whose lawn,” Pittman said.

The real tragedy behind many of the stories

While the internet challenge may be fun, there may be more to the story.

“It’s OK to laugh at the funny stuff that happens here, but bear in mind the flip side, too,” Pittman said. “Not every ‘Florida man’ story is laugh-out-loud funny. Some of them have real tragedy behind them.”

When he did the challenge, Pittman said, all the stories that popped up “were sad, really.”

While not applicable in all cases, mental health problems often played a role, Tompkins said. Mental health is a huge issue in Florida, which ranks at the bottom of all states for mental health funding, according to the Florida Policy Institute.

“When the work of journalists basically pokes fun at crime and activities that no reasonable person would be involved in, it’s on us to get beyond the snicker and laugh and sneer and look at if there’s a bigger issue,” Tompkins said.

“It would be wrong to think that Florida has some crazy crime rate — our violent crime rate is actually dropping,” he said. “What is very high, however, is the epidemic of mental health.”