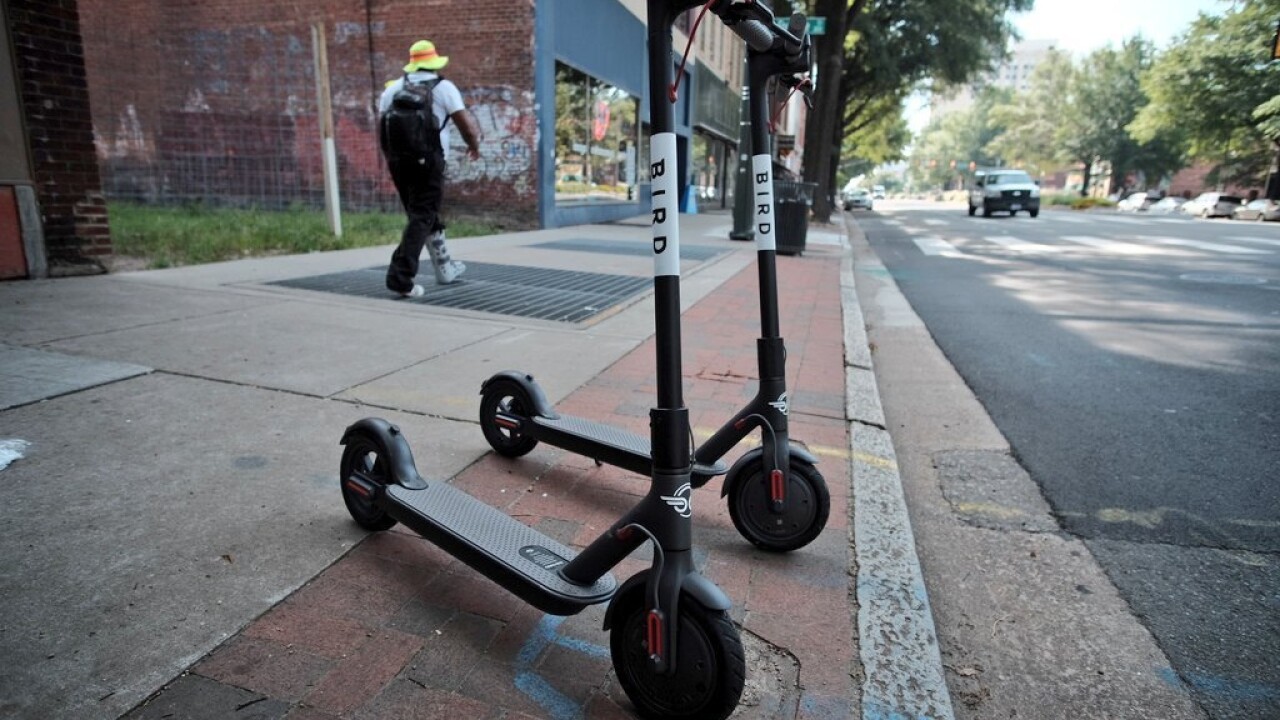 RICHMOND, Va. — It may be a bit chilly out to zip around on a scooter, but eventually the Birds will migrate back — and could soon fly under new rules. HB 2752, introduced by Del. Todd Pillion, R-Washington, passed the General Assembly Thursday and heads to the governor to sign. The bill gives local governments the authority to regulate vendors of dockless, motorized scooters and also updates state law regarding operation of the devices.

“If we give this authority to the local jurisdictions, unless there’s something constitutional going on, let’s keep it within the localities and resist the urge to legislate this stuff from Richmond,” said Sen. Creigh Deeds, D-Bath, during a floor reading of the bill. The bill passed both chambers unanimously. Lawmakers updated the current definition of a motorized skateboard or scooter to include speed and weight. Under the new bill, the devices can travel at a speed up to 20 miles per hour and weigh no more than 100 pounds. Current law was updated to add that the scooters are allowed in bicycle lanes. The bill details other operations that include:

Those additions would become law on July 1.

The section of the bill that authorizes localities to regulate scooter companies like Bird and Lime would take effect on Jan. 1, 2020.

Existing regulations, ordinances or pilot projects currently implemented by a locality will not be impacted.

In August, Bird began dropping scooters at 150 university campuses around the nation, including Virginia Commonwealth University in Richmond.

“I remember seeing a bunch of scooters just lying all over the ground,” VCU student Jackson Pray said. “The concept is very cool, but the actual delivery, I think, was a little poor.”

Residents responded with both curiosity and animosity, while city officials immediately stepped in with concerns.

“The unregulated and disorderly deployment and use of powered scooters has the potential to create a public nuisance on the city’s streets and sidewalks and endanger public health and safety,” stated the Richmond Department of Public Works in a cease-and-desist letter to the California-based company, Bird. The scooters kept appearing around the city — and that’s when DPW began caging the Birds. They remained impounded for months. Mayor Levar Stoney stated his support for the scooters but said guidelines were needed, tweeting: “I like these scooters. How about we get our teams around the table and make this work the right way?”

The two-wheeled devices are leading what is being called the “micro-mobility revolution.” Bird now operates in over 100 cities and claims over 10 million rides since its launch in 2017. Other popular vendors are Lime, Skip and Spin.

“I think they’re very helpful,” VCU student Kaylee Yousefi said. “Especially if you’re running late in the morning, you can just hop on and go to class.”

In Richmond, a scooter share company must submit a $1,500 permit application fee, which comes with an annual fee of $20,000 to $45,000, depending on the number of scooters in

the fleet. A reinstatement fee costs $2,500. A vendor can not have more than 500 scooters in their fleet, including ones on the road and any impounded.

The city ordinance will take effect in mid-March.