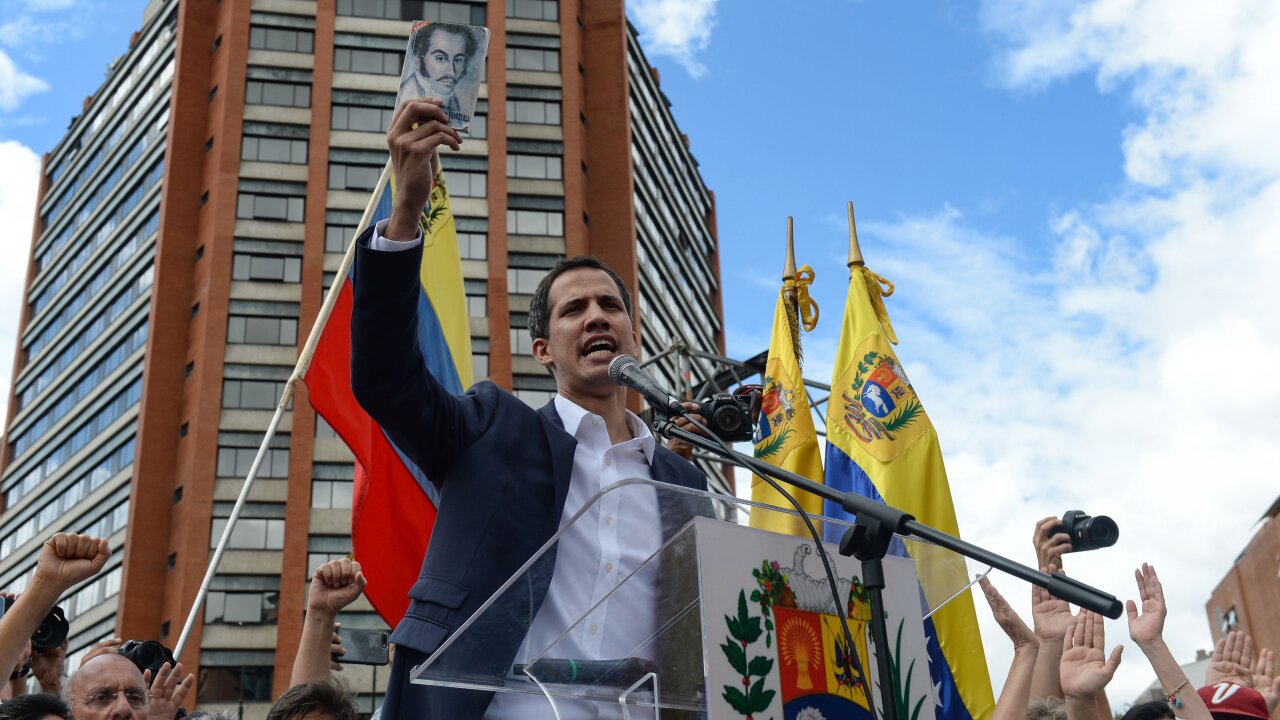 President Donald Trump’s decision to recognize Venezuelan opposition leader Juan Guaido as the country’s interim president sets the stage for dramatic escalation in the coming days, as forces within and outside Venezuela wrestle to determine its future.

President Donald Trump’s decision to recognize Venezuelan opposition leader Juan Guaido as the country’s interim president sets the stage for dramatic escalation in the coming days, as forces within and outside Venezuela wrestle to determine its future.

Embattled President Nicolas Maduro responded to Trump’s announcement by cutting ties with the US and ordering American diplomats to leave within 72 hours, an order that could lead to confrontation even as the White House dismissed it as “meaningless.”

Thirty-five-year-old Guaido swore himself into office and declared that Maduro had been deposed — though analysts say it’s not clear the former bodyguard’s fall is anywhere near imminent or that Trump’s power play will pay off.

Trump’s declaration set the stage for further drama that will reverberate in US domestic politics, even as it creates tensions in the region and beyond.

“This is a confrontational moment and I would expect full speed ahead escalation,” said Michael McCarthy, a research fellow at American University and CEO of Caracas Wire, a research consultancy.

“This is going to escalate nationally and internationally with the Maduro regime doing everything it can to marshal support from Beijing and Moscow,” McCarthy said. “Those actors might not support Maduro’s style or leadership, but they’re there to push back against the United States and they’re not going to walk away quickly.”

Besides adversaries China and Russia, key US allies such as Mexico have not moved to recognize Guaido, however, and Turkey’s leader has offered Maduro his backing.

European Council President Donald Tusk expressed support for Guaido on Wednesday and called on all of Europe to join him, while the European Union’s foreign policy chief, calling Guaido the “president,” urged that his civil rights, freedom and safety and that of all members of the National Assembly be respected.

The Trump administration, meanwhile, is intimating that it will back its political move with muscle.

The first real standoff could come over US diplomats. Secretary of State Mike Pompeo said Wednesday that the US does not recognize Maduro as president and therefore believes he does not have the legal authority to expel US foreign service officers.

Pompeo called on the Venezuelan military and security forces to “continue protecting the welfare and well-being of all Venezuelan citizens, as well as US and other foreign citizens in Venezuela” in a statement Wednesday night.

“We call on all parties to refrain from measures that are inconsistent with the privileges and immunities enjoyed by members of the diplomatic community,” the statement continued. “The United States will take appropriate actions to hold accountable anyone who endangers the safety and security of our mission and its personnel.”

The US Embassy in Caracas issued a security alert saying protests may continue through the week and announcing that US citizens needing emergency assistance would be helped on Thursday, though visa appointments would be canceled. It asked US government personnel to restrict their movements to certain areas and added that it was asking them to keep “their preschool and school aged children home from school on January 24.”

The White House said it was closely monitoring protests in Venezuela as well as the response from Maduro, who took to the balcony of the presidential palace Wednesday to assail “the gringo empire,” accuse it of a coup attempt and charge that the US’ only interest is Venezuela’s oil, gas and gold.

The next 48 hours could be key for both Venezuela and Trump, whose bravado stand may not yield any immediate change but will raise expectations for US action, analysts said, particularly if the standoff over US diplomats isn’t quickly resolved.

“Recognizing Guaido is a bold step which commits Washington to further action, to the extent the Maduro regime lashes out at Guaido or his followers,” said Eric Farnsworth, vice president at the Council of the Americas. “Expect some volatile and rocky days ahead.”

One thing to watch, McCarthy said Wednesday, is “where this new sworn-in president sleeps tonight: Is he going to be put in jail? Will he be in a diplomatic mission in Caracas? Will he be on his way to the US?”

While Trump has long decried US interference or engagement in other countries — recently moving to pull the US military out of Syria and Afghanistan — the decision to intervene in Venezuelan politics is driven in part by his domestic political concerns, many analysts said.

“I think a lot of it is about Florida politics,” said Risa Grais-Targow, Latin America director at the Eurasia Group. Florida, with its 29 electoral votes, is a perennial swing state in presidential elections and its population of Venezuelan and Latin American exiles could be important in determining Trump’s chances of retaining it in his 2020 re-election campaign.

Trump, along with Vice President Mike Pence and national security adviser John Bolton, met at the White House on Tuesday with a delegation of GOP Florida lawmakers — Republican Sens. Marco Rubio and Rick Scott and Rep. Mario Diaz-Balart, as well as Gov. Ron DeSantis — to discuss the decision, a congressional source told CNN.

The White House decision to invest political capital in a standoff over Venezuela is also driven by long-standing frustration among nations in the hemisphere about the upheaval generated by Venezuela, where economic disintegration has led to food and medical shortages, widespread suffering and desperate refugee flows.

Farnsworth points out that Latin America holds a special place in US foreign policy.

“Broadly, support for democracy has been the top issue on a bipartisan basis since the end of the Cold War,” he said. “Expectations for democratic behavior regionwide are higher than elsewhere, in part because the strategic issues have generally been seen as less critical compared with, say, North Korea.”

Despite the White House position, which will likely lead to further US sanctions on Venezuela, there are no signs Maduro will soon be gone, analysts said.

Instead, Washington might simply be left slowly ratcheting up sanctions, issuing statements about building on penalties that are already in place against the mining sector, using targeted oil sanctions, freezing foreign assets or eventually imposing an import ban.

“The US endorsement is politically important, symbolically important, but in order to see a regime change, there are some things lacking,” Grais-Targow said, pointing to the strong support Maduro still has from the state’s security apparatus and members of the military.

“Over the years he’s been very clever about co-opting their support, sharing economic benefits with them — the military now has an oil services company,” Grais-Targow noted. Maduro “knew he needed the military’s support to take a more authoritarian turn, so he’s been bringing them more and more into the government and making sure they had a stake in the regime’s survival.”

The eternal question, Grais-Targow said, is when they will break away from him.

“These people really don’t have a reason to give up what they have and these developments don’t make them think they could be included in the country’s future, either,” he noted. “In order to get them to play along, they need to believe they have a stake.”

Offers of amnesty, McCarthy said, “are not credible enough.”

In his impassioned address from the presidential palace on Wednesday, Maduro called on the military to stay united. And his inner circle, for now, was defiant.

Vice President Delcy Rodriguez mocked US officials for looking for some other country to administer, given the US government shutdown. “I’m going to say this the way the people of Venezuela would say,” Rodriguez said, “‘Yankee, go home!'”