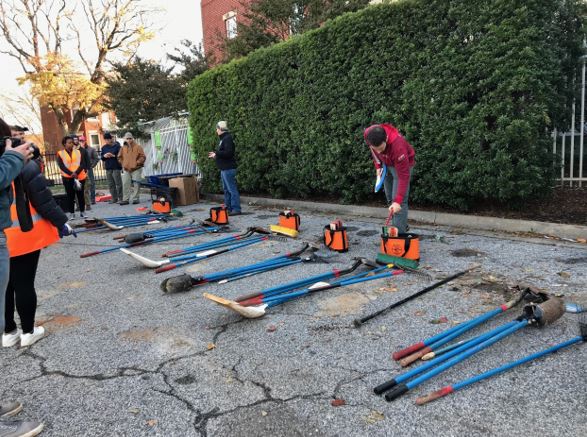 RICHMOND, Va.— Volunteers gathered on a chilly mid-November weekend in the Carver neighborhood’s Smith-Peters Park to finally bring The Carver Tree Project to life. After over a year of planning, four shifts of volunteers helped plant 62 trees in a historic neighborhood with sparse greenery.

Wyatt Carpenter, VCU’s sustainability projects and program coordinator, began planning the Carver Tree Project about a year ago with Catherine Viverette, assistant professor in VCU’s Center for Environmental Studies. The pair secured a partnership grant from VCU’s Division of Community Engagement, which allowed them to begin the groundwork for the project.

Carpenter recalled thinking the process would be simple, but as they dove into the work, it quickly became complicated.

“I think the challenging part was just figuring out what we didn’t know,” Carpenter said. “Every time we thought we had all the answers, that sort of opened a new door.”

From auditing the existing trees for carbon sequestration to securing neighborhood buy in, the project took over a year to plant the first tree.

With Viverette’s help, a VCU class of environmental science students measured the carbon dioxide sequestration of the neighborhood’s existing trees over the course of the 2017-18 academic year.

Carbon dioxide sequestration is the process by which trees capture and store carbon dioxide, one of the benefits trees provide to the environment. Viverette’s students have been collecting the same measurements in her Panama study abroad class for the last eight years, but this was the first time they’d performed the tests in Richmond.

The research results were compiled into a comprehensive report that included both Carver and Richmond’s tree coverage.

The team of students found 411 standing street trees with an economic value of close to $800,000. Carpenter called this “a nice hefty number for not very many trees.”

When completed, VCU will use the tree’s ecosystem service value to claim carbon offsets, which helps the university get closer to their goal of achieving climate neutrality by 2050.

Students also identified spaces without trees that were viable tree wells. A tree well is any empty space along sidewalks that can be planted.

The students’ research took into account a variety of factors, including which empty wells could support trees, city requirements for where trees can be planted and resident’s input.

After evaluating these factors, 70 spots in need of trees were identified and 62 trees were planted.

Besides the obvious benefits of the students’ research, Viverette emphasized how the project fostered increased community engagement.

“For the students it brings it full circle, it gets them from the classroom to immersion in a project,” Viverette said. “It’s great for our students to become more of a part of the surrounding communities.”

While Viverette and VCU’s Center for Environmental Studies focused on researching the existing trees in Carver, a big focus for Carpenter was securing approval from the community.

“We were really fortunate to have buy in from Jerome Legions who’s the president of the neighborhood association,” Carpenter said.

This helped the project get off the ground.

In addition to gathering community input, Carpenter has been going to neighborhood meetings for the past six to seven months. Carpenter said he updated residents on the project at every meeting and answers questions.

“I think that has been really valuable as sort of a trust building exercise because they see me or somebody from our projects coming back consistently,” Carpenter said.

“I’m really happy about the fact that it’s been a really collaborative process from the beginning. It wasn’t just me that pulled this off. I had a ton of help from a lot of people,” Carpenter said.

Jerome Legions, president of the Carver Area Civic Improvement League, called the project “an education process for all parties involved.” Legions had to emphasize the value of street trees to residents, as it was often seen as primarily aesthetic, but he said the project was “very well received” overall.

Legions said Carpenter and Viverette originally came to him with an idea.

“Once they had a foundation for what the idea would look like, it became a community-sponsored project from that point on,” Legions said.

The neighborhood contributed funding toward the project, as Legions believes having more trees will make Carver a healthier neighborhood, sidewalk aesthetics will improve, and residents will feel safer walking around.

On the weekend of the tree planting, Legions was impressed with the turnout.

“I think the volunteers from VCU were really amazing, and they had more volunteers than they were anticipating,” he said.

There are currently no concrete plans for a similar project in another neighborhood, though it’s a long-term goal.

“I’ve just been trying to keep things focused on Carver for the time being,” Carpenter said.

Carpenter said the Urban Forestry Collaborative is trying to “learn as much as we can during that process, and then eventually, maybe in a year or so, try to do another neighborhood.”

Perhaps incorporating investigators from the Urban Heat Islands project, a collaboration between VCU’s College of Engineering and the Science Museum of Virginia, will be in the future.