Images from some of the most read stories on WTVR.com in 2018.

RICHMOND, Va. — How do you measure, measure a year? Here in web land, one way we measure a year is by the number of stories we’ve posted and the impact those stories made. Each day on WTVR.com, we post a wide variety of stories including breaking news, Problem Solvers investigations, Heroes Among Us features, Beyond the Roster sports reports, and Building Better Minds education profiles. In fact, more than 15,000 stories were posted on WTVR.com in 2018.

But which stories made the biggest impact? We’ve crunched the numbers and are ready to present the year’s most-read stories on WTVR.com.

In April 2018, a woman driving through Virginia was pulled over for speeding. After her traffic stop, she went on Facebook and accused the sheriff’s deputy of racism.

“I was just bullied by a racist cop, who threatened to pull me out of the car,” the woman said in an 11-minute Facebook video.

After her video went viral on social media, Brunswick County Sheriff Brian Roberts released his deputy’s body camera footage — which showed the interaction between the woman and his deputy.

“This video here, there are things I could go over and critique the officer on, it’s not racial things, it’s not hate things,” Sheriff Roberts said.

Soldier, charged with driving on drugs, appears to have been tweeting from stolen military vehicle

In June 2018, a truly bizarre sight was reported in Richmond. A line of police cars following a military vehicle down a usually busy Broad Street.

Turns out a Virginia National Guard soldier had stolen the M577 armored personnel carrier from Fort Pickett and drove it 60 miles along state highways and interstates until he eventually stopped downtown.

While in the vehicle, it appeared the soldier was posting photos and video on social media.

The soldier was ultimately charged with a variety of crimes and is due back in court in 2019.

An open letter from a furious Henrico teacher

One of the most read stories of 2018 was not written by a CBS 6 journalist, it was penned by a Henrico County Public Schools teacher.

Her "letter from a furious Henrico teacher" began:

"Nowhere in my contract does it state that if the need arises, I have to shield students from gunfire with my own body. If it did, I wouldn’t have signed it.

I love my job.

I love my students.

I am also a mother with two amazing daughters.

I am a wife of a wonderful man.

I have a dog that I adore.

I don’t want to die defending other people’s children; I want to teach kindness and responsibility…and Art History."

Fields' letter was shared thousands of times around the country and garnered thousands more comments on social media.

Nothing like a good Giant Hogweed story to get the Internet abuzz. When the invasive plant that can cause third-degree burns and permanent blindness was discovered in Virginia, people wanted to know about it. Researchers at the Massey Herbarium at Virginia Tech put out the warning and shared helpful information with those concerned about coming into contact with the plant.

The interstate was shutdown in both directions for hours that morning after a crashed tractor trailer spilled scrap metal across lanes in downtown Richmond. The images were shocking. 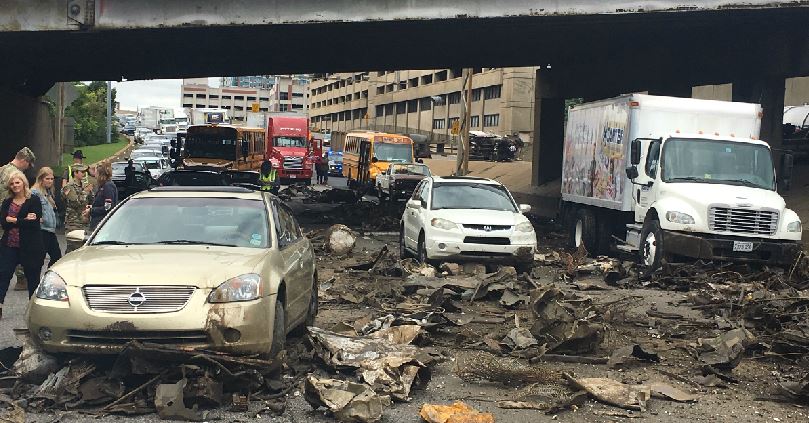 Fortunately no one was seriously hurt.

Sometimes a story comes along the strikes a nerve among those who read it. Such was the case in March 2018 when a parent reached out to the CBS 6 Problem Solvers about a situation at their child's daycare. The Chesterfield mom wanted answers after she said her son was asked to clean the daycare's bathroom.

"We’re committed to providing outstanding early education and care in keeping with state guidelines," a daycare spokesperson said about the accusation. "When a child requests to help, we encourage them to do so as a learning opportunity."

Other notable stories -- that did not quite crack the top of the list include: