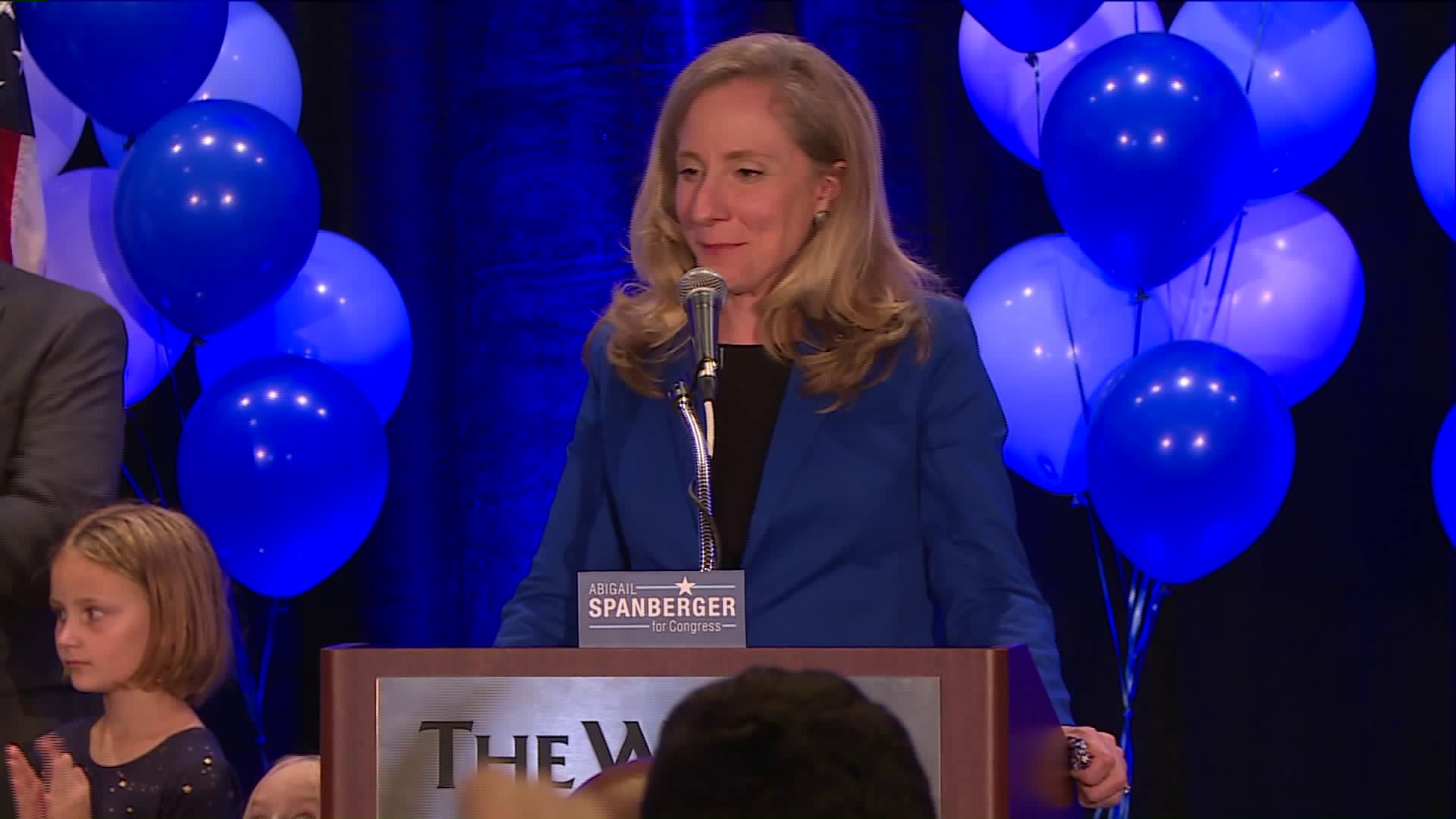 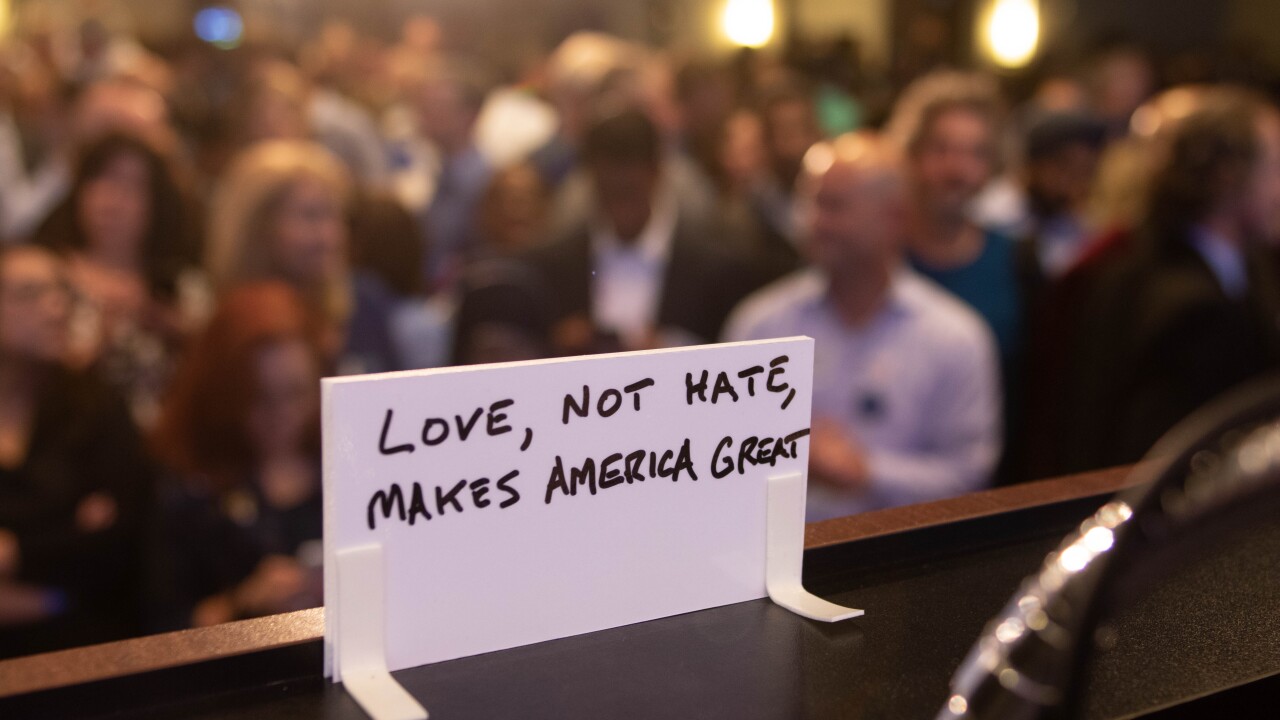 HENRICO COUNTY, Va. -- Supporters erupted in cheers at the Westin Hotel in Henrico Tuesday night when Democrat Abigail Spanberger claimed victory in one of the most competitive races in Virginia.

“We won an unwinnable district by doing exactly what every campaign should do. We focused on the needs of the people, the voters,” Spanberger said in her victory speech. “We talked about the substinant issues affecting their lives.”

Spanberger said it was the collective strength of the people that got her to where she is now. She also mentioned some of the issues that she will be fighting for while in Congress. Issues such as affordable and accessible healthcare, an equitable tax policy, well-funded public schools, more bipartisanship, and ensuring the rights of everyone regardless of their background.

“It is my profound honor to be standing here tonight, and I am committed to bringing you the kind of responsive and accountable leadership you deserve,” said Spanberger said, who also proclaimed a message of unity regardless of party affiliation. She said that her position is universal to all residents of the 7th District.

“To those who are disappointed this evening, to those who did not vote for me and whose candidate did not win, I will serve you as your representative,” Spanberger said. “I have been elected to serve each and every resident of the district and that’s exactly what I intend to do.”

Spanberger is the first woman to hold the 7th District seat and the first Democrat to do so since 1968.

As votes were counted throughout the evening, Spanberger and Brat were neck and neck.

Supporters at the Westin held their breaths and cheered as the results began favoring Spanberger.

Emily Jasper, a product manager and one of the leaders of the activist group Indivisible Richmond, said that she is concerned about how national politics affect people locally.

“I live in Abigail Spanberger’s district. I am really hoping for a positive outcome,” Jasper said before the final results came in. “She is taking what has been happening locally and she can connect it with what is happening nationally.”

Aleta Strickland, a school psychologist, had been working on Spanberger’s campaign for more than a year. She began working on the campaign after first meeting Spanberger and was certain of her victory.

“I just think that she has new energy, she has ideas, she is willing to work across the aisle in a bipartisan way,” Strickland said.

Rorey Hughes, a university advisor, is new to the district and was hoping to flip it.

“As someone new to the area, I am looking for change,” said Hughes earlier on Tuesday evening. “A flip of the whole district would be great.”

Sandra Antoine, a state government worker and campaign volunteer, was very excited by the amount of support for Democratic candidates in the Midterm Elections. .

“We are a party of change, we are a party of inclusiveness,” Antoine said. “The challenges that many face in our country. Healthcare issues. poverty issues, second chances. I am a believer that the Democratic party supports all of those values.”

Steve Spasojevich, a compensation analyst, and his wife Sarahbeth Spasojevich, an English professor, said they were thrilled Spanberger won. They said that this victory restored some hope for them.

“I hope this changes the dynamic that we’ve been seeing in politics, and the divisiveness, and is a voice of reason and starts a movement,” Steve Spasojevich said. “And lets the government know that the people of America don’t believe what has been happening the last two years, and that’s not representative of our country.”

Sarahbeth Spasojevich said this election meant a lot to them and that she hoped that this brought humanity back to the U.S. House of Representatives.

“We have three children and we we just want them to see that politics doesn’t have to be about dividing people,” Sarahbeth said. “That it can be about coming together and listening and combining ideas, and using differences of opinions to make us better, not to limit us or keep us down.”

Abigail Waller, a state employee, and her wife Jesse Waller, a massage therapist, said they’re empowered to get even more involved in the next election.

“When Abigail showed up on the stage, I found it completely hard to believe, and I’m still living in that moment,” Abigail Waller said. “It was a razor thin margin, so I’m still buzzing with disbelief.”

Danial Gagnon, a farmer, said he and his family feel great about the results.

After winning the 4th district, @RepMcEachin makes an appearance to address the crowd at the @SpanbergerVA07 Election Night party. #iPadJournos #VA07 #VA04 pic.twitter.com/fA2PfaHey9

Mary Brunner, a retired schoolteacher who served as a volunteer on Spanberger's campaign, said it was amazing to see young women stepping forward and making an impact on society.

“It’s exciting to be a part of it. She is the real deal, she is everything someone might say she is pretending to be,” Brunner said. “She is that person. She is honest, she is the centrist, she is going to bring the sides of Congress together, and make them work together. She’s just got that kind of a personality.”

Cameron Trant, a consultant and campaign volunteer, said this is his first time getting involved in politics, but he felt that it was time. He said he feels awesome about the results because Spanberger brings a message of positivity.

“She has experience in areas that areas of this country need, she’s willing to talk to people and bring people together. That is honestly what we need,” Trant said. “We’re too far fractured, too far broken, and we need people that are willing bring things towards the center, have a calm, collective conversation, but then to also put forth positive policy, and move this country forward.”

While incumbent Dave Brat did not concede the race on Tuesday evening, Spanberger praised voters for coming out and making their voices heard.

“My friends, tonight is about the power of our Democracy,” Spanberger said. “It’s about what happens when we come together to believe in, work for and vote to make changes in our community and in our country.”

Spanberger promised to continue listening to what the residents care about and to help bring about the change they want to see.

“As your representative, I will work every single day to reward the trust that you’ve placed in me,” she said. “Abigail Spanberger is my name and I am your congresswoman.”

Editor’s note: This story was reported by Sarah Danial, Rachel Kidwell, Taylor Mills, and Katrina Tilbury. These student reporters are part of the “iPadJournos” mobile and social media journalism project, a cooperation between WTVR.com and VCU’s Richard T. Robertson School of Media and Culture.