RICHMOND, Va. — Lacking money, as well as public and media attention, third-party candidates in Virginia’s congressional races rarely get the attention to mount a serious challenge the major party opponents. For Libertarian candidates like Joe Walton in the 7th district, Pete Wells in 4th, and Stevan Porter in the 11th, the biggest battle they face is simply getting their names on the ballot.

“I was the first candidate in the state to win an appeal of my ballot access count,” Wells said. “I turned in over 1,600 signatures and came up a bit short. But it was close enough to be able to appeal.”

There were also two independent candidates running in the 2nd and 10th districts, but they withdrew.

While Republicans and Democrats can hold primaries to decide who gets on the ballot, third-party candidates must collect thousands of petition signatures, which takes up a significant amount of time and resources.

Several Libertarians voters said they used to protest outside events from which they or their candidates were excluded. But Walton said that some organizations in his district have been welcoming to third parties.

Virginia Union University held a political forum in September in which all candidates were able to enter and participate.

When it comes to campaign finances, Libertarians and other third parties typically do not raise as much money as the two major parties.

In the 7th district, Democratic candidate Abigail Spanberger and Republican incumbent Dave Brat have each raised millions of dollars, a stark difference compared to the thousands of dollars Walton’s campaign has raised. This lack of funds puts Walton and other third-party candidates at a major disadvantage as they cannot afford paid media, such as televised campaign ads, mailers or other canvassing material.

“Politics should not be about money, I agree wholeheartedly,” said Porter. “But one of the problems is, how do you get your message out?”

Many Virginians voters also ask themselves why they should give their vote to a third party.

Libertarians and other third parties struggle with the notion that they steal votes from Republicans and Democrats and tilt the balance in an election. Porter, for instance, said that he doesn’t go to any event without being accused of stealing votes.

“That implies that those votes belong to Republicans or Democrats,” Porter said. “I can’t steal something unless it belongs to you, right? Now, what’s that saying about how they view their voters?”

“The idea that everybody is going to vote Democrat or Republican, and if there is another candidate then they are going to take away votes, is totally false,” said Walton. By simply having a third choice on the ballots, he added, voter turnout can be increased by motivating those who wouldn’t have voted at all if they only had the choice between two candidates. 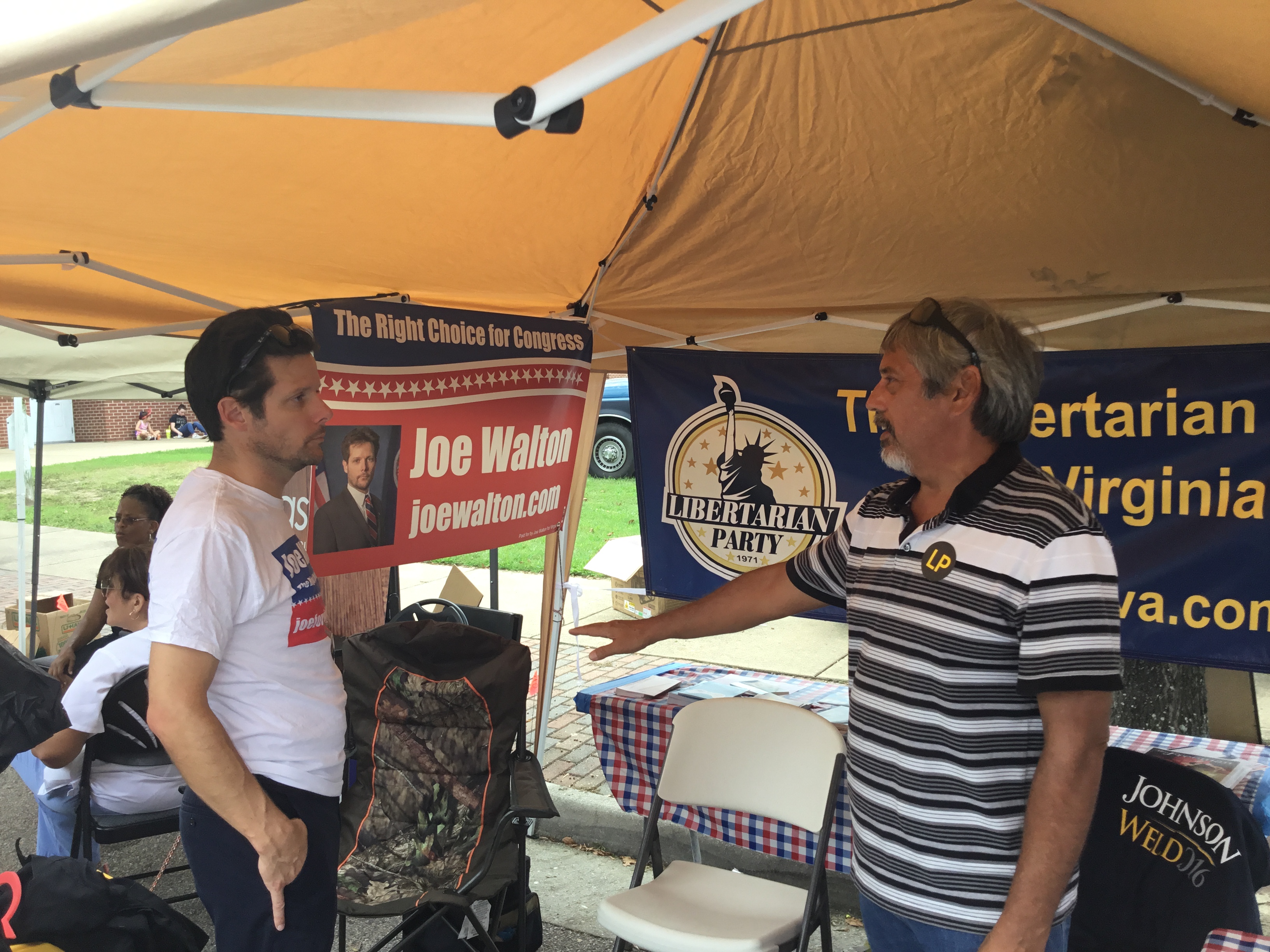 Some voters who identify with the Libertarian Party may have been aligned with the two major parties in the past, but drifted away as political polarization increased.

For instance, Anthony Grebas, the treasurer of the Chesterfield Libertarians, used to be a Republican. He felt that his party had left him behind, and that is when he joined the Libertarian Party.

“It turns out there are a lot of disaffected Republicans and Democrats that were looking for an alternative,” Grebas said. While getting their candidates elected is a long shot, Libertarians still work to raise the awareness for their party and to be able to achieve major party status some time in the future.