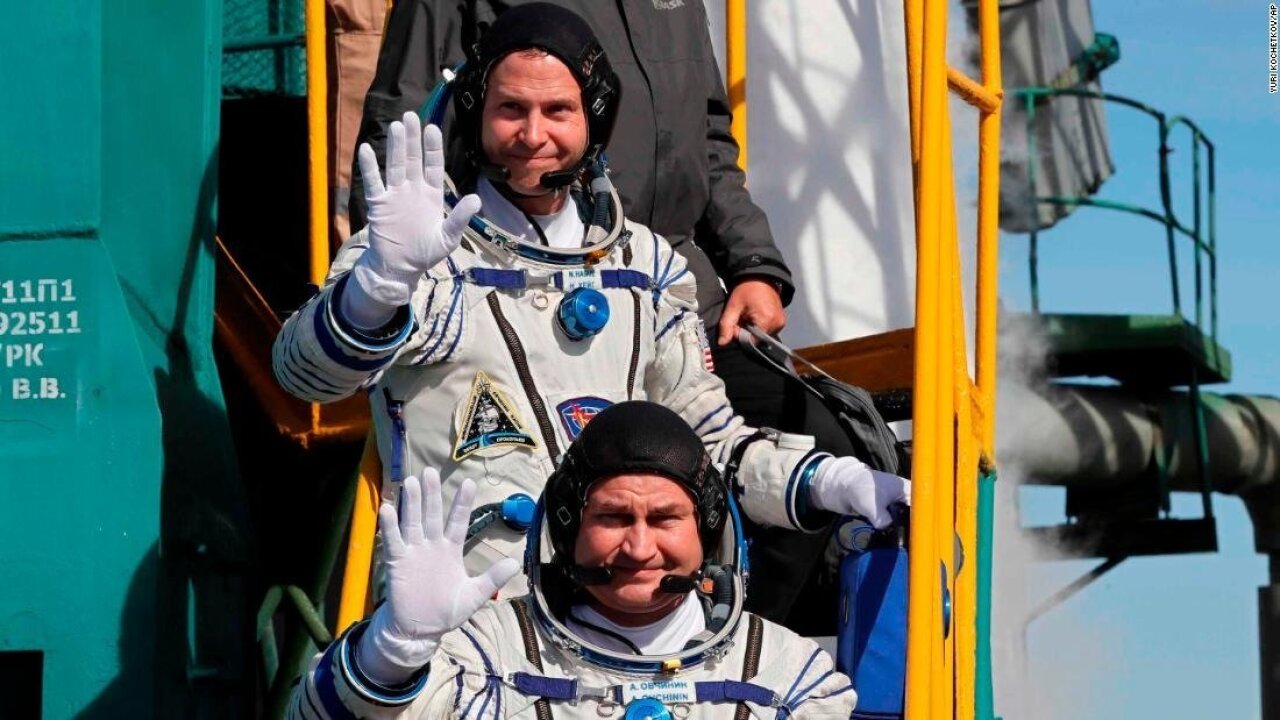 Two minutes into a space station-bound mission on a Russian Soyuz MS-10 spacecraft, something went wrong. They were headed back toward Earth. US astronaut Nick Hague was one of two on board.

Two minutes into his first trip to space last Thursday, US astronaut Nick Hague found himself thinking how smoothly the flight was going. “It was everything I expected it to be,” he told NASA director Jim Bridenstine at Johnson Space Center on Tuesday.

All was going according to plan. The Kansas native, selected by NASA to be an astronaut in 2013, was finally heading to the International Space Station. Alongside him in the cramped quarters of the Soyuz MS-10 spacecraft’s capsule was Russian cosmonaut Alexey Ovchinin.

They had lifted off from Baikonur Cosmodrome in Kazakhstan at 2:40 pm local time.

Two minutes into the launch, during the first stage separation, the rocket’s boosters are supposed to separate simultaneously and jettison back to Earth. Their job is done.

Then, things didn’t go according to plan.

Shortly after launch, there was an anomaly with the booster and the launch ascent was aborted, resulting in a ballistic landing of the spacecraft, according to a NASA statement.

“We were violently shaken side to side, thrust back into our seats as the launch escape system ripped us away from the rocket,” Hague said in describing what happened. “As all of that’s happening, you’re being shaken around, vision is blurry. I hear the alarm sounding and see the red light where the engine has had an emergency. I had the vivid realization we aren’t making it to orbit today, we’ve been pulled off rocket and we have to land.”

When the capsule aborted the ascent automatically, it caused some shock for a moment. “I knew we were away from the rocket,” Hague recalled. They were in ballistic reentry and descent, a sharper than normal angle of landing.

The astronauts first felt weightlessness and then an excess of G force, or the force of gravity. The interpreter for the Russians said “6.7 Gs.” Canadian astronaut Chris Hadfield tweeted, “On a normal Soyuz entry we pull about 4G, but ballistic yields 8 or 9, depending on angle and speed.”

“As it rips us away from the rocket, once those thrusters are done. We’re like if you throw a baseball up in the air, it’s going to follow this ballistic trajectory,” Hague said. “That weightlessness was when we were peaking out and getting ready to fall back down to the Earth.”

As the capsule fell back to Earth, it had to slow down so the chutes could open. The aerodynamic drag caused the excessive G forces. Minutes passed and the G force started to “peak up,” Hague said.

The worst of it lasted for about 20 seconds, he said. But they had trained for this in the centrifuge, at higher G forces, for longer durations.

But it wasn’t like his experience in military aircraft, where the Gs try to pull the blood out of your head. Instead, they were “coming straight at us,” he said. They pushed down on his chest. He had learned how to keep his chest open so he could take in a breath of air. Then, he had to keep his muscles flexed and essentially breathe with his stomach, using his abdomen to open the diaphragm in order to keep breathing in and out.

Memories of that moment will be forever burned into Hague’s mind he said. “I remember this small piece of debris floating across in front of my face and looking up and seeing our Zero G indicators floating there and realizing, ‘This must be what space is going to feel like, but not today.'”

The capsule was still under the nose cone of the rocket. For 30 seconds, they couldn’t see outside, anxiously waiting for the cone to separate so they could watch as they plummeted down through Earth’s atmosphere.

“Those 30 seconds were the longest of the entire process,” Hague said. His mind was full, trying to process what had happened, where they were, if he and his fellow cosmonaut were OK and figure out the state of their vehicle.

Then, the practice kicked in.

Hague and Ovchinin both transitioned from launch procedures to landing, preparing for what to do to get back to ground over the next 15 minutes.

Yet, to listen to them speak on the recording now, they sound calm.

Part of Hague’s astronaut training included learning Russian. He can be heard speaking in Russian as Ovchinin communicated what was happening to Russian mission control.

Hague chalks it up to so much time spent training, going through every possible failure scenario — including one similar to what actually happened. But, he chuckled, “There were a lot of things I probably wanted to say.”

“You realize you’re in a tough spot, the thing you can do to give yourself the highest chance of success is focus and stay calm and do the things you were trained to do,” he added.

After the Gs started to drop off, the astronauts followed standard landing procedure — which they’ve practiced hundreds of times.

But they weren’t prepared for the physical sensations. Hague had scrawled some notes during training of what to expect. Then, he felt it.

“When the parachute opens, it’s five to six Gs of lateral side to side of swinging back and forth,” Hague said. “Before the chutes open, we’re trying to collect loose items in capsule so they don’t become projectiles.”

Normally, in anticipation of a landing, rescue forces would be circling in helicopters, giving the astronauts updates on their altitude. Instead, Hague was looking out the window and trying to guess while Ovchinin tried to communicate with rescue forces in order to be extracted.

Then, at the last minute right before touchdown, the rockets ignited to help brace and minimize impact with the ground.

“It is the brute force method of getting back from space,” retired astronaut Scott Kelly told CNN in 2016 to describe what it’s like to return to earth from the International Space Station. “It’s like going over Niagara Falls in a barrel but while you’re on fire.” Hague said that’s exactly what it felt like.

Next, Ovchinin acted quickly, cutting the parachute so they wouldn’t drag. The crew landed south of the city of Zhezkazgan in Kazakhstan. The whole ordeal unfolded in about 15 minutes.

“It felt like we bounced two or three times, tumbled and skidded to a stop,” Hague said. “It was a rough ride. When we skidded to the stop and I looked out the window, I gave this huge sigh of relief.”

A similar landing happened to now–retired astronaut Peggy Whitson during a gut-wrenching, off-target landing in April 2008. She said the Soyuz spacecraft hit the ground so hard it bounced — although she didn’t know it at the time. “From inside the capsule I had no perspective that we actually had bounced, it was just one big hit and a roll,” Whitson told CNN at the time.

Hague and Ovchinin were all grins from ear to ear, high-fiving each other and cracking jokes about the short flight.

“We looked each other eye to eye and knew we had survived,” Hague said.

The capsule had landed on the hatch that the astronauts are supposed to be able to use to evacuate. They were hanging from their straps. Rescue forces said they weren’t far away, and para-rescuers jumped as soon as possible to reach them.

Minutes later, there was a tap on the window, and fingers forming the OK signal. Hague gave them a big smile in response. He said the Russian search and rescue teams “amazed” him with their response.

Hague walked away from the landing with a few bumps and bruises. The two astronauts were flown to Baikonur, where they were reunited with their families and officials.

“When I got to see him at the airport, his personality was as bright as ever,” NASA director Bridenstine said. “I am humbled and just thrilled. The training paid off.”

The investigation behind the cause of the booster anomaly is underway. Tuesday, Hague went out with his wife for a run in Houston, enjoying the cool fall weather. But he’s eager to truly go to space and have a successful launch in the future, whenever that may be.

“For a first flight for me, it was extremely memorable,” Hague said.

It could have been worse, but still, it’s a harrowing experience for an astronaut expecting to live in space for six months.