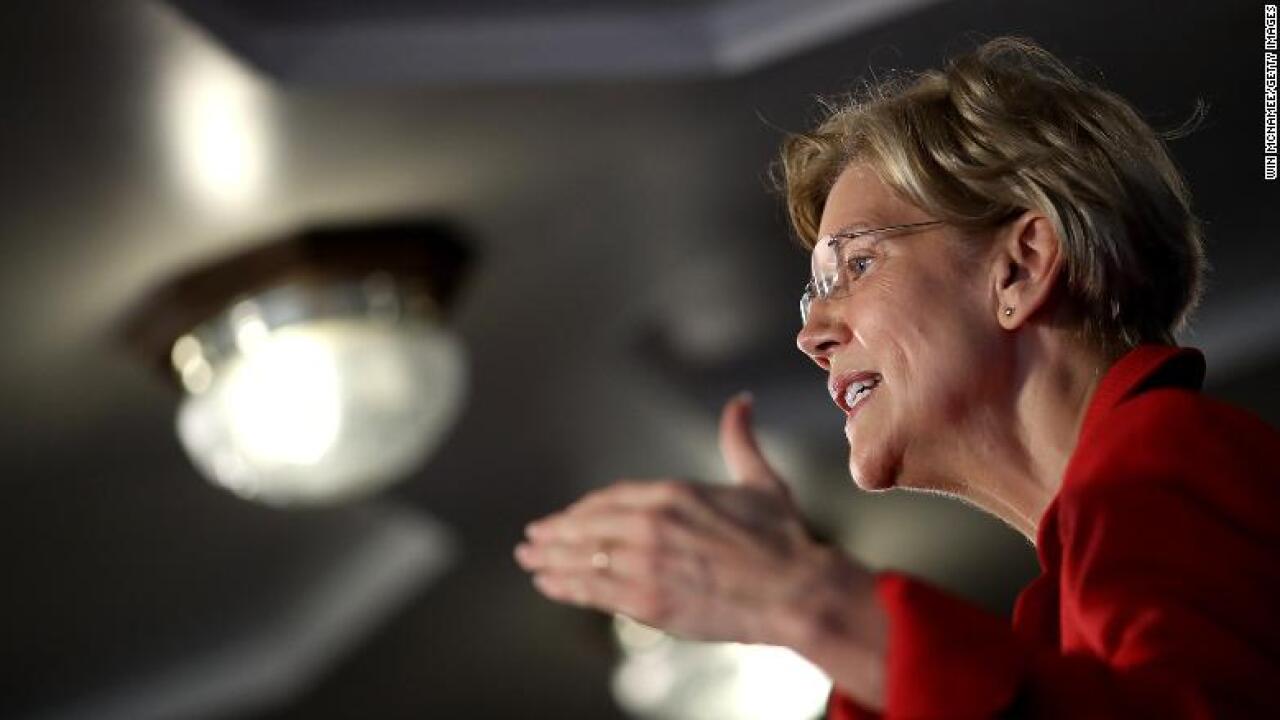 WASHINGTON — Sen. Elizabeth Warren has released the results of a DNA analysis showing she has distant Native American ancestry, in an apparent attempt to pre-empt further questions and attacks should she run for president in 2020.

Warren first faced scrutiny for her purported Native American heritage during her 2012 Senate race. But President Donald Trump has revived and amplified the controversy as he eyes Warren as a possible rival, frequently mocking her with the nickname “Pocahontas.”

But Warren now has documentation to back up her family lore — an analysis of her genetic data performed by Carlos Bustamante, a professor of genetics at Stanford and adviser to Ancestry and 23 and Me.

In a rollout video about Warren’s heritage, the Massachusetts Democrat is seen sitting behind a laptop as she calls Bustamante.

“Now, the President likes to call my mom a liar,” Warren asks him. “What do the facts say?”

Bustamante responds, “The facts suggest that you absolutely have a Native American ancestor in your pedigree.” Warren is shown nodding.

Trump waved off Warren’s DNA test results on Monday, telling reporters, “who cares?” when asked about them.

“She owes the country an apology,” the President said when asked whether he himself owed the senator an apology for calling her “Pocahontas.”

Bustamante’s full report is now posted on Warren’s website, along with other supporting documents and interviews detailing her background.

According to the report, “the great majority of (Warren’s) identifiable ancestry is European.” However, the report adds, “The analysis also identified 5 genetic segments as Native American in origin at high confidence.”

Bustamante’s analysis places Warren’s Native American ancestor between six and 10 generations ago, with the report estimating eight generations. “The identity of the sample donor, Elizabeth Warren, was not known to the analyst during the time the work was performed,” the report says.

Warren’s video makes clear that it is in part a response to Trump’s attacks, opening with a clip of the President mocking Warren as “Pocahontas.” Members of Warren’s family express their disappointment with the President’s taunts in a series of interviews.

“He’s talking about stuff he doesn’t have any idea about,” Mark Herring, Warren’s nephew, says in the video.

On Monday, Kellyanne Conway, a counselor to Trump, told CNN that the video was “odd” and wrote off the DNA results.

The video also tackles the question of whether Warren’s Native American heritage played any role in her professional advancement. That issue has been raised by the White House as well, with press secretary Sarah Huckabee Sanders saying during one briefing, “What most people find offensive is Sen. Warren lying about her heritage to advance her career.”

Warren’s purported Native American heritage was touted by Harvard Law School when she was a professor there. But Warren’s video includes testimonials from faculty at Harvard Law, the University of Houston, University of Pennsylvania Law School and UT Austin School of Law insisting Warren’s professional advancement was not tied to it.

“Her heritage had no bearing on her hiring,” Jay Westbrook of the UT Austin School of Law says in the video. “Period.”

Her campaign has also published a lengthy archive of university documents to support these claims.

The information is unlikely to dissuade the President from continuing to zero in on the controversy surrounding Warren’s background. At one rally, depicted in Warren’s video, Trump offered to donate $1 million to charity if Warren were to take a DNA test “and it shows you’re an Indian.”

But Trump said Monday that he “didn’t say” he would pay Warren $1 million for showing her test results.

“I didn’t say that. You better read it again,” he told reporters outside the White House.

At the July rally where Trump made the original offer, he said, “And we will say, ‘I will give you a million dollars, paid for by Trump, to your favorite charity if you take the test and it shows you’re an Indian … we’ll see what she does. I have a feeling she will say no but we will hold it for the debates.”

Later Monday, Trump said he did not owe Warren the money, saying that was contingent on her winning the nomination.

“If she gets the nomination in the debate where I was going to have her tested,” Trump said.

“I’ll only do it if I can test her personally,” he said. “This is not something I would enjoy doing either.”

The President also said Monday he hopes Warren will run for president because she will be “easy” to beat.

A Warren aide told CNN the decision to release the video and DNA test about her Native American ties is part of a larger effort to put out as much information about her background as possible as she weighs a 2020 presidential run. Warren also recently released 10 years of tax returns and her personnel files from Harvard and other schools. The aide said the DNA test came back Friday.

Warren wonders in the video about the motives of those, like Trump, who “have questioned my heritage and my family history.”

She concedes in the video that she is not enrolled in any tribe, “but my family history is my family history.” What counts as Native American heritage is a question with different answers among the 573 legally recognized tribes in the United States.

“Using a DNA test to lay claim to any connection to the Cherokee Nation or any tribal nation, even vaguely, is inappropriate and wrong,” the statement said in part. “It makes a mockery out of DNA tests and its legitimate uses while also dishonoring legitimate tribal governments and their citizens, whose ancestors are well documented and whose heritage is proven. Senator Warren is undermining tribal interests with her continued claims of tribal heritage.”

Most tribes use their membership rolls dating back decades, requiring a direct descendant or blood quantum. Warren claims Cherokee and Delaware heritage — both of which use membership rolls to determine who qualifies for tribal citizenship, which Warren has never claimed. Cherokee Nation principal chief Bill John Baker is 1/32 Cherokee by blood.

Melanie Benjamin, the tribal chairwoman of the Mille Lacs Band of Ojibwe Indians in Minnesota, said Warren asked her for advice on how to discuss her heritage before a speech in February.

“My advice to her — and I used an example — is that in Indian country, we are very community-oriented,” she said. “We are those types of people where we will embrace you as part of our community, and then we will recognize you as our community from there on.”

“If you are told from Day One that you are that tribal person and that tribal home, that’s who you are. And that’s the simplest way to explain that,” Benjamin said.

Warren concludes in the video that the issue “isn’t just about casual racism,” but part of a pattern of “discrimination, neglect and violence” that Native communities have faced “for generations.”

“And Trump can say whatever he wants about me,” she adds. “But mocking Native Americans or any group in order to try to get at me that’s not what America stands for.”