Trump vows ‘severe punishment’ if journalist was killed by Saudis 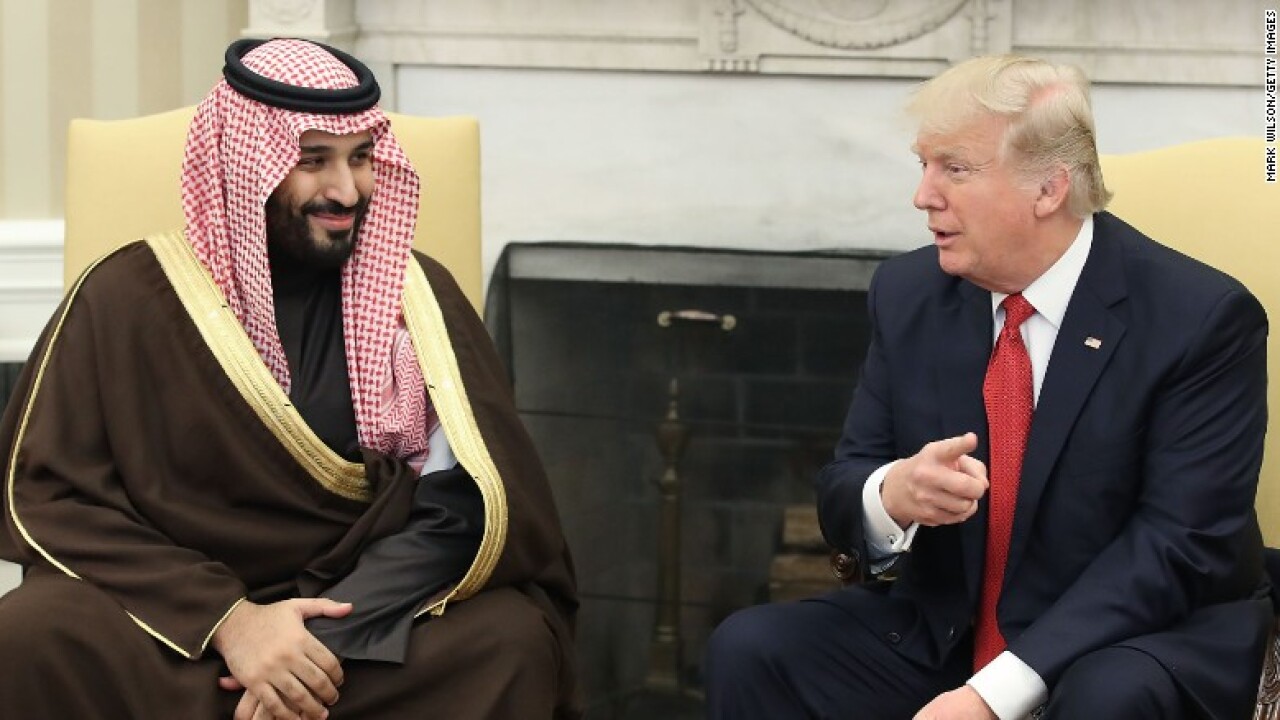 US President Donald Trump vowed in a “60 Minutes” interview that the United States would get to the bottom of what happened to a missing Saudi journalist and that there would be “severe punishment” if he was found to have been murdered.

In an excerpt from the interview, released by CBS on Saturday morning, Trump said the case of Jamal Khashoggi was “being looked at very, very strongly” and that his administration “would be very upset and angry” if it turned out that the Saudi government had ordered his killing.

“As of this moment, they deny it and they deny it vehemently. Could it be them? Yes,” he said, in what are his strongest comments yet on the matter.

Khashoggi, a columnist for the Washington Post, went into the Saudi consulate in Istanbul on October 2 to obtain paperwork that would allow him to marry his Turkish fiancée. He hasn’t been seen in public since.

On Friday, a source familiar with the ongoing investigation told CNN that Turkish authorities have audio and visual evidence that showed Khashoggi was killed inside the Saudi consulate.

The evidence, which was described to the source by a Western intelligence agency, showed there had been an assault and a struggle inside the consulate. There is also evidence of the moment that Khashoggi was killed, the source said.

The foreign intelligence service found the nature of the evidence, which was provided in a briefing from Turkish officials, to be “shocking and disgusting,” the source told CNN.

Trump’s comments came as a growing number of global businesses withdrew from an upcoming summit in Saudi Arabia amid concerns over Khashoggi’s disappearance.

Trump: ‘There’s a lot at stake’

The Khashoggi case puts the United States in a difficult position because of its close ties with Saudi Arabia, seen as an important strategic ally in the Middle East. Trump and his son-in-law, Jared Kushner, have also developed personal and business relationships with the Saudis.

Asked by CBS journalist Lesley Stahl if bin Salman had denied Saudi involvement in Khashoggi’s disappearance, Trump replied: “They deny it. They deny it every way you can imagine. In the not too distant future I think we’ll know an answer.”

Trump has faced mounting bipartisan pressure this week from members of Congress who are calling for him to impose stiff consequences on Saudi Arabia.

On the question of possible sanctions, Trump restated his reluctance to jeopardize a $110 billion arms deal he brokered with Saudi Arabia that was inked on his first foreign trip as President, saying he didn’t want to hurt jobs. But, he added, “there are other ways of punishing, to use a word that’s a pretty harsh word, but it’s true.”

He added: “There’s a lot at stake. And, maybe especially so because this man was a reporter. There’s something — you’ll be surprised to hear me say that, there’s something really terrible and disgusting about that if that was the case so we’re going to have to see. We’re going to get to the bottom of it and there will be severe punishment.”

The “60 Minutes” interview is expected to air Sunday.

The US President said Friday he had not yet spoken with King Salman of Saudi Arabia — the father of the Crown Prince — in the wake of Khashoggi’s reported killing, but that he planned to “pretty soon.”

Turkish authorities believe 15 Saudi men who arrived in Istanbul on October 2 were connected to Khashoggi’s disappearance and possible killing. At least some of them appear to have high-level connections in the Saudi government.

On Thursday, a US official familiar with the intelligence told CNN that the US had intercepts of Saudi officials discussing a plan to lure Khashoggi back to Saudi Arabia and detain him.

Washington’s “working assumption” is that Khashoggi was killed inside the consulate in Istanbul, according to another US official familiar with the latest intelligence. “We are pretty clear eyed it is likely to have happened and it didn’t end well,” the official said. The source did caution that this was the latest assessment and no conclusions had been made.

Saudi Arabia Interior Minister Prince Abdulaziz bin Saud bin Naif bin Abdulaziz said reports that the Saudi government ordered the killing of Khashoggi are “lies and baseless allegations against the government of the Kingdom,” according to a statement in the state-run Saudi Press Agency (SPA) published early Saturday.

A delegation from Saudi Arabia has arrived in Turkey for the investigation, Turkey’s state-run Anadolu Agency reported Friday.

A Saudi official said that he “welcomed” an announcement by the Turkish President to form a joint team of experts from both countries to investigate Khashoggi’s disappearance,” according to a Saudi Information Ministry statement.

Saudi Arabia is not cooperating with Turkey’s probe, Turkish Foreign Minister, Melvut Cavusoglu said on Saturday. “We haven’t seen any collaboration yet. We want to see that.”

He said Saudi authorities still need to permit Turkish police and forensic teams to enter the consulate where Khashoggi is believed to have been killed. “Where did he disappear? There, in the consulate. Therefore, for the sake of this investigation, in order to bring everything into open they must allow access to consulate.”

Turkish newspaper Sabah reported early Saturday that Khashoggi may have recorded his own death through his Apple Watch, and that security forces leading the investigation found the audio file inside the phone Khashoggi left with his fiancé.

CNN could not independently verify the Sabah report and was seeking comment from both Saudi and Turkish officials.

CNN intelligence and security analyst Robert Baer cast doubt on the claim, saying it was too far for a Bluetooth connection and that Khashoggi was unlikely to have anticipated transmitting a recording in advance. “I think what’s happened, clearly, is the Turks have the Saudi consulate wired, they have transmitters,” he said.

“The Turks don’t trust any diplomats, and they have been into most embassies and most consulates in Turkey and they listen to what’s going on — and if indeed there are tapes proving that he was murdered, I think that’s probably how they know. But the Turks are very reluctant to admit that.”

Saudi Arabia is also facing growing isolation as firms pull out of a high-profile investment summit due to take place in Riyadh later this month.

Most of the news outlets that had agreed to sponsor the Saudi Future Investment Initiative — known as “Davos in the desert” — have now withdrawn.

They include Japanese media company Nikkei, CNBC, the New York Times and the Financial Times. Bloomberg said Friday it was pulling out as a media partner, but added that it still planned to cover news from the conference

CNN, which was a media partner for the event, confirmed Friday that it too would no longer participate in the conference. Viacom CEO Bob Bakish, Uber chief Dara Khosrowshahi, and The Economist’s editor-in-chief, Zanny Minton Beddoes, have also pulled out.

However, IMF chief Christine Lagarde told reporters at the International Monetary Fund’s annual meeting in Bali, Indonesia on Saturday that she still planned to go to the Riyadh summit but would be paying close attention to new information.

“Horrifying things have been reported” following Khashoggi’s disappearance, she said, but she had “to conduct the business of the IMF in all corners of the world, and with many governments.”

US Treasury Secretary Steven Mnuchin also reaffirmed his commitment to attend the Riyadh conference, while expressing concerns about Khashoggi’s status. “The conference is on for now, I am going,” he told reporters in Bali.

United Nations Secretary General Antonio Guterres, speaking to the BBC at the IMF meeting, called for the “truth to be clear.”

“We need to know exactly who is responsible and of course, when we see the multiplication of this kind of situation I think we need to find ways in which accountability is also demanded,” he said.