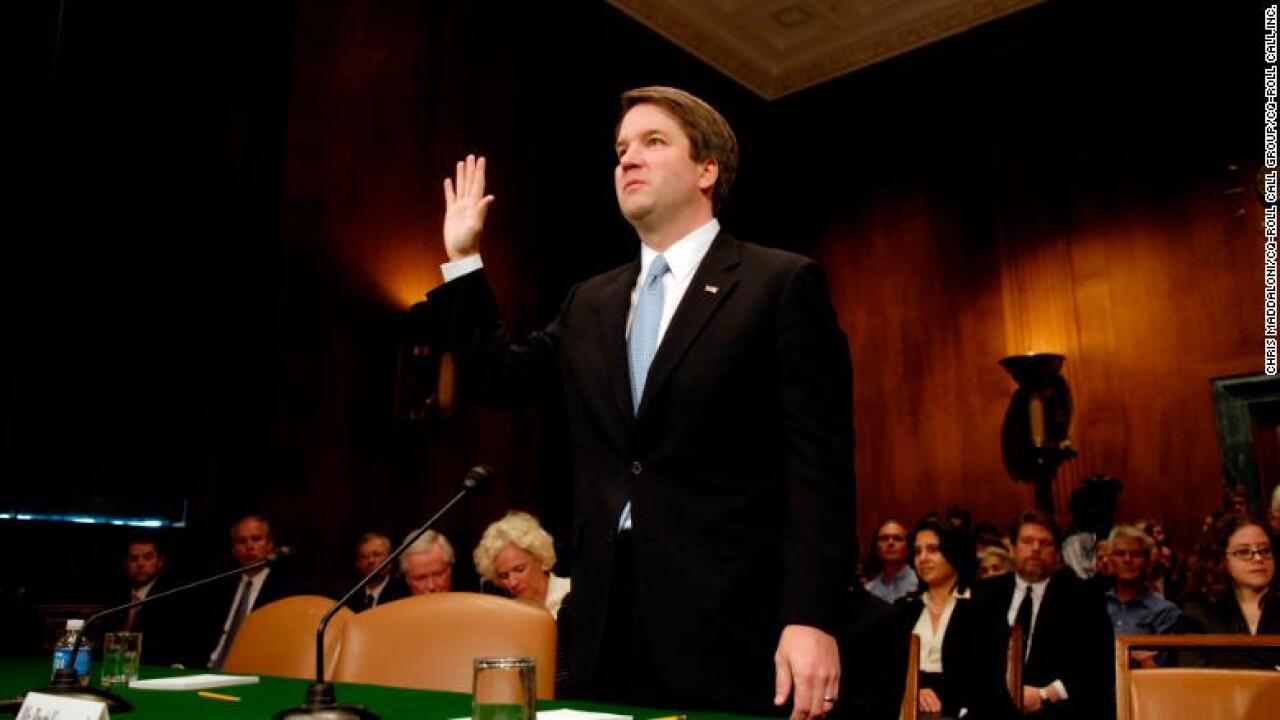 Brett Kavanaugh is sowrn-in at a Senate Judiciary Committee hearing on his nomination to be U. S. Circuit Judge for the Ninth Circuit.

Protesters opposed to Brett Kavanaugh’s appointment to the US Supreme Court swarmed over Washington on Saturday — massing at the Capitol, disrupting the confirmation vote in the Senate and banging on the Supreme Court building doors when Kavanaugh arrived to be sworn in.

About 5:45 p.m. ET Saturday, a large crowd of protesters surged onto the front steps of the Supreme Court, chanting, “Hey hey, ho ho, Kavanaugh has got to go.”

After police pushed them back from the doors, the demonstrators held signs and chanted, “No justice, no peace,” and “We believe Anita Hill,” a reference to the woman who accused Justice Clarence Thomas of misconduct.

It’s not known if Kavanaugh heard the protesters. Police cleared the steps of the court about 6:15 p.m. and set up barriers.

Earlier, Capitol Police said 14 people were arrested for protests in the Senate Gallery, 13 during the successful vote to confirm Kavanaugh and one a short time earlier.

Protesters stood one by one in different sections of the gallery, most with their fists raised, and yelled “I will not consent.”

Police forcibly removed the protesters, with one person dragged out by their arms and legs. They kept screaming as they were pulled into the hallway.

Crowds started forming around 9 a.m. ET outside the Capitol building and the Supreme Court building and grew through the morning.

Protesters occupied the Rotunda Steps on the East Front of the US Capitol early Saturday afternoon, with about 150 of them being arrested, Capitol Police said in a news release. Video showed them lined up, with wrists cuffed behind their backs on the Capitol lawn. Police cleared the steps and the Capitol Plaza, and the protesters headed back to the Supreme Court.

All the protesters taken into custody Saturday were charged with a violation of the Washington code against crowding, obstructing or incommoding. They were processed off-site.

More than 300 have been arrested in anti-Kavanaugh protests this week in the nation’s capital.

Demonstrators arrested Saturday who were arrested earlier — and paid a fine and were released — will not be allowed to pay a fine and go free again, Capitol Police told CNN. Instead, they will be taken to central booking, where they will remain until Tuesday, because Monday is a federal holiday. This policy also would apply to those who disturb the Senate floor from the gallery.

Anyone arrested Saturday for the first time can pay a fine and be on their way, police said.

Kavanaugh’s confirmation beame a sure thing after Republican Sens. Jeff Flake of Arizona and Susan Collins of Maine and Democratic Sen. Joe Manchin of West Virginia announced they would support him.

Demonstrators held signs calling Kavanaugh a bad nominee because of sexual assault allegations against him and saying the selection process seemed to be biased against women. One woman displayed a sign saying “Predators Club” with pictures of Kavanaugh, Justice Clarence Thomas and President Donald Trump.

A demonstration scheduled for Saturday outside Collins’ office in Portland, Maine, was canceled.

A group gathered there Friday and fell silent when she announced her decision, CNN affiliate WGME reported.

“It’s just this feeling of being utterly ignored,” Jenny O’Connell of Portland told WGME on Friday. “Susan Collins just made a huge choice to ignore her constituents and survivors (of sexual assault).”

The senator was elected in 1996 and would be on the ballot in 2020 if she decides to seek re-election.

In New York, about 25 people protested at midday around Washington Square Park but left after half an hour. Groups also assembled in Seattle, downtown Cleveland and Burlington, Vermont.

According to postings on Facebook, protests also were scheduled Saturday in at least 10 other cities, including New Orleans and Tucson, Arizona.