Bob Woodward at VCU: ‘We are at a pivot point in history’ 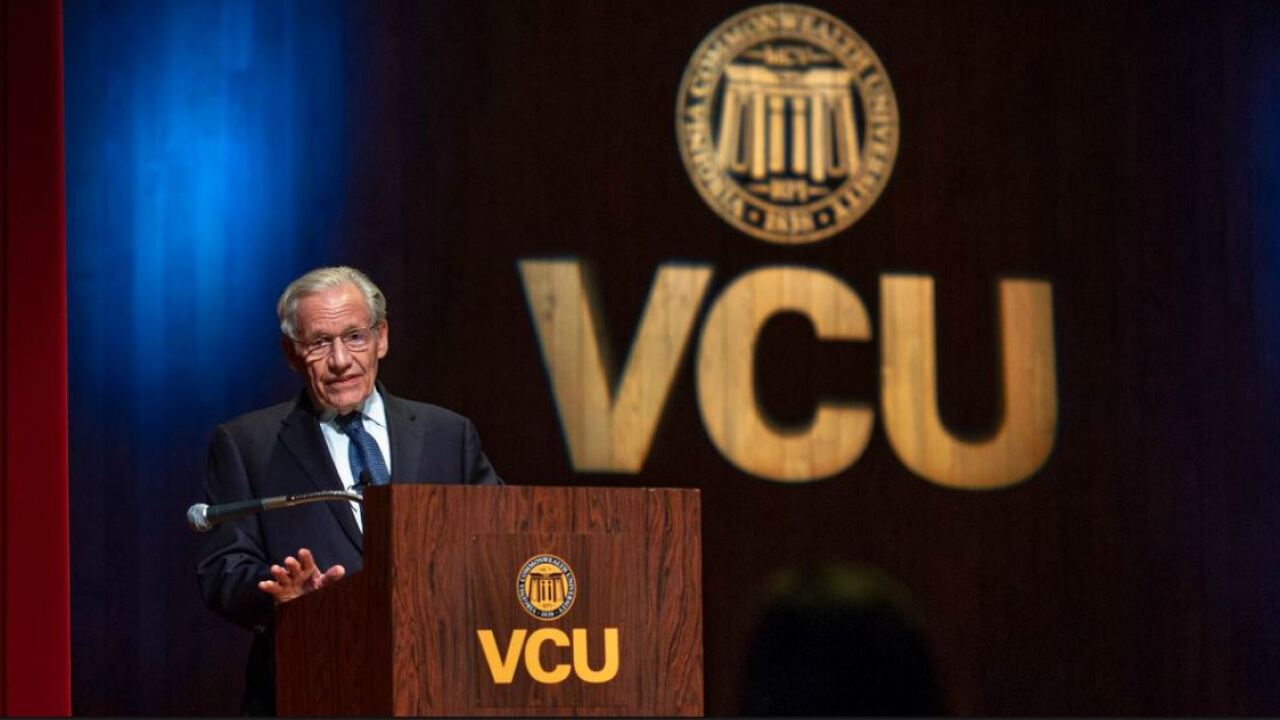 RICHMOND, Va. — After hours in traffic on Interstate 95 and canceled meet-and-greet events with students and faculty, journalist and author Bob Woodward was finally greeted by a standing ovation and cheers as he walked onstage at W.E. Singleton Center for the Performing Arts at VCU on Tuesday evening.

“We are at a pivot point in history,” the Washington Post investigative reporter, who rose to fame for his reporting with colleague Carl Bernstein on the Watergate scandal in the 1970s, said.

Earlier this month, Woodward published his latest investigative book on the Trump Administration, titled “Fear: Trump in the White House.”

“There is a war on truth,” Woodward said during his talk to an audience of several hundreds in the theater and via live stream in three large lecture halls on campus. “You have to deal with truth. Truth is the foundation of how we have our debates and how people make their decisions.”

The event was part of the speaker series of the VCU Humanities Research Center and co-sponsored by VCU’s president’s office and the Richard T. Robertson School of Media and Culture.

“If we want to understand the moment we find ourselves in today and to consider how to move beyond it, we first need to figure out how we got here over the past several decades,” Richard Godbeer, director of the Humanities Research Center, said in his opening remarks.

Woodward spoke about his experience from Watergate up to his new book on the Trump White House as well as the challenges that not only journalists faced today in pursuit of the truth, but society as whole.

“The job, I believe, of the journalist is political neutrality,” Woodward said. “I don’t come at this with any partisan motive.”

Woodward reflected on the process of uncovering the truth in the Watergate scandal and remembered the words of his Washington Post publisher Katharine Graham.

“She said ‘Look, keep working on this story. It’s about the President of the United States and we have a triple, quadruple responsibility to get to the bottom of it,'” Woodward said. “‘That is our job and don’t hold back. Be more aggressive and keep on the story.'”

Attendee Margaret Burke stressed the importance of journalists like Woodward being aggressive and pursuing the truth.

“I think the press is so important, and I think their investigation is very vital,” Burke said. “And I think we need a free press.”

Woodward encouraged student journalists to be bold and pursue the stories that challenge them. He said that journalists need to go knocking on doors and show up.

Tiffany Brinkley, a journalism student at VCU, said she was excited to learn from Woodward’s experience during his career.

“I hope to learn how to be a better journalist, especially when it comes to investigative journalism,” Brinkley said. “I also want to know what bumps in the road he ran across and how he got through them.”

Hong Cheng, director of VCU’s Robertson School, expressed his excitement to have such a prominent figure visit VCU. He said journalism students can learn to find pride and truth in what they do.

“Because of all the reasons we know so well, journalism probably is one of the most misunderstood professions in the world today,” Cheng said. “But at the same time it’s one of the professions that we feel the most proud of.”

Bill Oglesby, a journalism professor at VCU, said he believed investigative journalism was the most important aspect of journalism, and he could not be happier with Woodward’s presentation.

“It was just a wonderful evening, it was great to have him here,” Oglesby said. “Once he finally got through the I-95 traffic and got here.”

By Sarah Danial and Katrina Tilbury

The Humanities Research Center at VCU hosted Pulitzer Prize-winning journalist @realBobWoodward this evening for a talk on “Truth, Freedom of Expression, Democracy and the Age of the American Presidency.” pic.twitter.com/MfrA1I5I3T